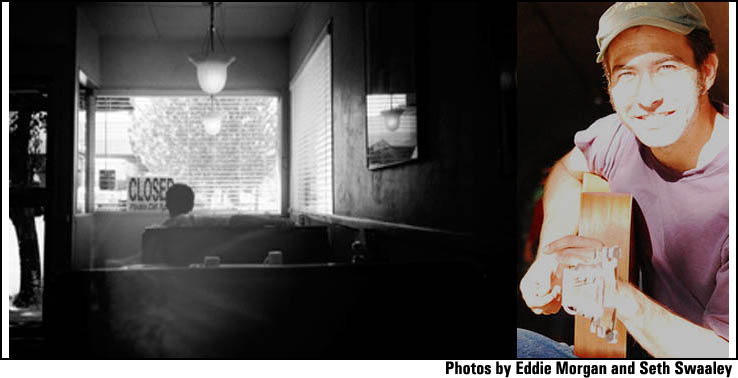 High, Low, and In Between: Chapter 4: Old Hat, New Tricks

For the next six months, I lived in a small studio in the basement of an Orthodox Jewish family in North Hollywood. They were nice folks, but rather drab conditions for what I was paying and what I’d been used to. I pretty much went to work, came home, and watched them build make-shift homes in the backyard for religious holidays. I read, listened to the countless kids above me run around, and slept.

It was during this time that I started getting back into the guitar. I had my dad’s old acoustic for years, a weathered Yamaha that I had borrowed permanently, but rarely played. Towards the days before the breakup with my girl, I had tried writing songs.  Aside from a couple of jam sessions in New Orleans, and since the days I was playing in Super Chinchilla Rescue Mission, it was the first music I’d played in nearly five years. The songs were awful, though: sappy, depressing lyrics about lost love. I even bought a banjo, but everything I played sounded like the soundtrack for an old kung-fu movie.

I’ve always had a pretty diverse appreciation for all kinds of music, whether it be classical or jazz or punk, but, gradually, I found myself getting more and more into old acoustic blues musicians and lesser-known country folks artists: Reverend Gary Davis, Blind Blake, Doc Watson, Lightnin’ Hopkins, John Fahey, Mance Lipscomb, Mississippi John Hurt, Woody Guthrie, and The Carter Family. Then through these I somehow stumbled upon the folks that followed in their footsteps, artists like Townes Van Zandt, John Prine, and Guy Clark.

With the old blues players, often times, it’s as if two people are playing at once, providing the bass and the melodies simultaneously, and the words, sung rough and mumbled, hit straight to the bone. In a way, these folks helped me keep my sanity in a time when I found myself teetering on the edge.

Prine sings about his father’s hometown in Muhlenberg County, Kentucky: “…sometimes we’d travel right down the Green River, where the air smelled like snakes and we’d shoot with our pistols, but empty pop bottles is all we would kill.”

Guy Clark tells the story of a man who, since he’s been young, has always jumped off his garage thinking he was Superman, “…he’s one of those that knows that life is just a leap of faith, spread your wings, hold your breath, and always trust your cape.” It struck a chord with me.

Van Zandt sings songs so true to love and loneliness and despair—“days up and down they come, like rain on a Conga drum, forget most, remember some, but don’t turn none away… everything is not enough, and nothing is too much to bear, where you been is good and gone, all you keeps the getting there.” Listening to these words, one can’t help but wonder if he isn’t channeling the words of some long-lost angels and spirits from some other time.

All of these guitarists were fingerpickers, which is pretty foreign to the whole bar chord punk rock style of playing I or anyone else I’ve known has played. Despite what any die-hard punk musician says about Bob Mould or Greg Ginn or J. Mascis (musicians I admire in their own right), what the old fellas were playing was a heck of a lot harder and original. Emotionally, it was raw and true and it had more of an affect on me. So, in that little basement I started to put in the hours of learning on the guitar what they were playing.

I’d grown tired of Los Angeles, though. I just couldn’t let go of the wandering spirit. After living on the East Coast and down in New Orleans, Southern California, despite being where I grew up, just seemed so foreign to me. I looked around into trying to move and keep doing the electrician thing. Portland, Oregon was one of the few places that would take me into their union. Truth be said, I really wanted to let go of it all. I just wanted to hit the road, you know, let the chips fall, but I felt like I had to finish something for once. I always seemed to be leaving things before I ever finished them, whether it was school or music or relationships, and this was going to be the one time I could say, “I did the time. I graduated.” It took six months of paperwork and flights to and fro for five-minute interviews. Once again, I was sitting across from electrical big wigs and telling them what they wanted to hear. Before I knew it, I was renting a good-sized house with a big yard and huge trees and all of the neighborhood stray cats hanging out on my porch.