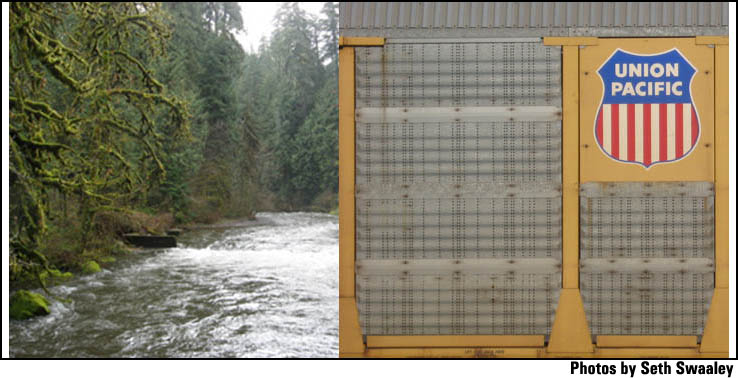 High, Low, and In Between: Chapter 2: Shots in the Dark

Into the darkness, East along 84 on the two-lane interstate with the semi-trucks and the soft light of the moon hugging alongside the snake-like path of the Columbia River. After HoodRiver, the lush forests and trees of the Columbia Gorge disperse and the landscape resembles a desert; the terrain rough, tough, and desolate. Unable to get anything but static for radio stations, my thoughts roam. I try to picture Lewis and Clark and all the folks following along after them in their wagons, struggling across the frontier, before the age of cell phones and cars and electric tools and magic pills and all of those other mystifying things that have made us part of the “great modern society.” The stars shine like sporadic reflections of broken glass, illuminating the river and the stillness of the night. I make it as far as Pendleton before I pull off.

Pendleton was like any other non-descript Midwest small town: flickering lights of TVs shining from windows. A few high school kids cruising around in beaten-up cars around the same three blocks all night long. Dogs barking in the distance. Main St. closed by six o’clock and the night was filled with the metallic smell of rusted industry.

I settled down in a bank parking lot. Any romantic notions I’d had about the road were quickly dispelled as I tried to get comfortable in the driving seat of my truck. The passenger side was packed and it was impossible to lie down. I leaned my head against the window with the steering wheel in my gut. It was right then a police car pulled in behind me. He stopped for about a minute and then drove away. Shortly after, I heard a shotgun being fired in the distance. The cop car peeled out and raced down the road. The same ordeal took place about fifteen minutes later and, figuring that at this rate I wouldn’t get any sleep, I drove around town and settled on a spot behind a semi-truck next to the Wal-Mart parking lot.

I had my windows cracked, but not fully down, and my knife at my side; you read the papers and you watch those crazy cable documentaries about murderers in small towns and maybe it’s just paranoia, but you get thoughts about places like this. Five minutes later, a woman appeared out of the shadows of the railroad tracks like some hobo ghost of the Union Pacific. She circled around the truck. I had the sun shield up and a shirt covering the side window for some sense of privacy, but through the cracks I could see her out there looking in. Eventually, she left. Around four she was back, her shopping cart wheels scraping along the asphalt to let me know of her arrival. At this point I had to laugh, raising my hands up; a little sleep, that’s all I’m asking here. Is that too much? But, truth is, I’ve traveled enough to know that the road is unforgiving; it could care less either way, and whatever plans and months of preparation you’ve made leading up to this moment all go out the window once you’re out there, once you’re in the thick of it. So, realizing the idea of sleep was nothing more than a cheap illusion, I stuck the key in the ignition and headed towards the Idaho border.

As I drove straight into the early morning sunrise, I had plenty of time to reflect on what had transpired over the past few years. It was an entirely different journey in itself, one I often times felt trapped inside of. Now, here I was in the middle of the summer moving to New York on just a whim and a dream. Maybe it was crazy. Maybe it was half-ass-backwards. I don’t know. I gave up a long time ago on trying to put too much faith in what makes sense. I won’t say it hasn’t gotten me anywhere, and I guess it works for some folks. It’s just that sometimes you have to go with your gut and that little voice in the back of your head. As far as everything else; well, in one way or another, it all falls into place.