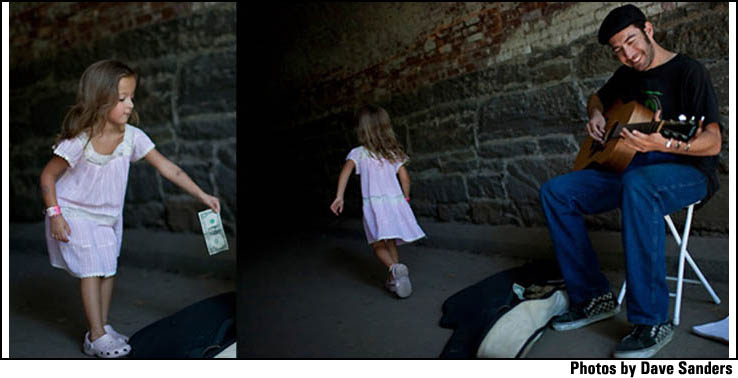 High, Low, and In Between: Chapter 13: Denouement

New York is a hustle town, I suppose more than any other I’ve ever been in; you see the prosperity in the suit and ties and sleek dresses on the streets of upper and lower Manhattan and in the trust fund college kids and you see the fallen dream in the raving chalk-legged men on 3 a.m. subways and sleeping on benches and in front of storefronts in the dead of winter. So I laid the guitar down and went out and got a job bussing and bar backing at big Texas BBQ restaurant in Manhattan. Although it isn’t much of a skilled trade, I can honestly say that I enjoy the work, much more so than I did being an electrician. Every day I ascend from the subway up into the streets and often I question whether or not—the buildings touching the clouds and the sun and moon somewhere out there though you can’t ever see them, the millions of cabs and people bustling about—I’m not still sitting in Portland, fast asleep; instead in some rather strange industrial dream in which I’ve yet to wake up from. Maybe something out of Metropolis. Soon I will open my eyes to the dark light of the morning and a constant drizzle and find myself stumbling around in a foggy haze and putting my boots on and grabbing my tool bag and growling back at the mean raccoon that hugs the tree in my front yard.

Thankfully, that’s not the case, so in my spare time I decided to type up all of my journal writings from the park and other musings from New York rambles. I also went through old columns from when I was writing for Razorcake and put them online. I hadn’t hardly written in over four years and now I felt rejuvenated with the word; not knowing if it was any good, but enjoying going through old and new tales, some happy, some sad, but stories all the same. I figured they were just gathering dust, sitting on the shelf along with rejection letters from a few I tried sending to other magazines, so why not throw them out there?

Now, as I sit in front of the window of my apartment, staring out at the warehouses and a huge carwash billboard and an air conditioning rooftop unit with wires fully exposed (definitely an electrical code violation. Stop it! Those days are over. Let it go!), a mysterious pair of underwear that hangs on the barbwire surrounding the back perimeter (foiled burglar maybe?), listening to the cars and semi-trucks racing along the Brooklyn-Queens Expressway towards the Battery Tunnel as the rain washes the Christmas snow away, sending me into a calm, meditative trance of sorts, I’m left with these thoughts: