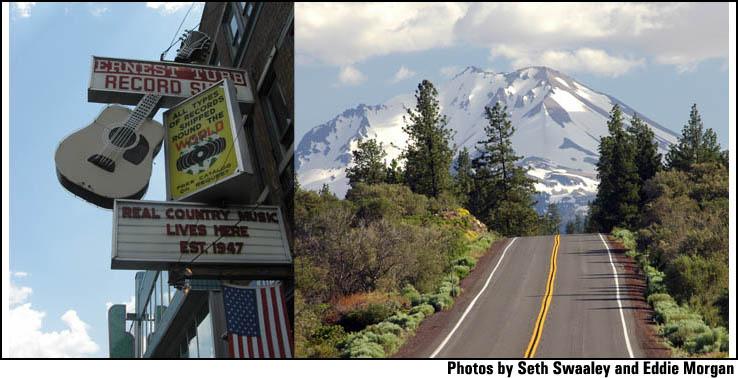 High, Low, and In Between: Chapter 10: Nowhere but South

By the time I got to Nashville, it was midnight and I couldn’t find the hostel I’d heard about. I camped out off of Broadway near the Cumberland River, which, for some reason—maybe geographical dyslexia—I was convinced was the Mississippi.

I slept in my truck, but by six in the morning the summer heat was too much, so I went out and found a breakfast joint downtown. Sitting there, I knew I wasn’t quite in Mississippi, but I truly had the feeling that I was in the land of Faulkner. I was taken back to a time years earlier, driving through the Delta, in the land of abandoned churches and plantation homes. Muddy Waters on the speakers and catfish and kids on bicycles followed by their dogs. Hanging out on 61 and 49, eating a pulled pork sandwich at Abe’s, and staring out at the legendary crossroads. An old dilapidated donut shop next door and thinking of Robert Johnson and the nice fat waitress and the cops in the corner. The mother of the family all wearing U. of Mississippi shirts raving about, “That rhubarb pie. Oh honey, I jus’ got to have that rhubarb.”

And now, years later, I was in a similar joint in Nashville. There was an old black lady serving grits and eggs on a paper plate. A younger Italian guy (son of the owner, judging from the pictures on the walls) stood behind the register. A friendly cook huddled over a steamy pot and another guy who looked and acted mentally challenged walked around the kitchen in circles. The random cast of regulars filed in through the door, all on a first name basis, ordering the same exact thing I imagine they’d ordered for the past twenty years.

The owner asked me if I was doing all right in a weird tone and I took it the wrong way, thinking, jeez, I must really look like shit. I did look rather ragged without much sleep. My stomach was a little shaky and I was feeling a bit lonely. Some days the blues get you; they get you good. Where was the woman of my dreams? Where was the romance along the road? Where was the great story I’d read about from countless writers who had traveled all around? Was it all just fiction? I didn’t want to wrestle with that thought so I brought my guitar down to the river with visions of Southern grandeur. I thought, it is times like these when great songs are written. Yes, it is in these moments when inspiring lyrics pour from the blood of the poets within all of us. But that heat was getting hotter and hotter: hell-hot and humid. All the benches shaded by the trees were taken up by the homeless so I was sitting out on the concrete, ass on fire and sweat dripping onto the guitar.

A little while later a guy, I’d say around forty-five, approached me.

“Hey partner, you got a song for me?”

I looked up at him and could smell the hard liquor on his breath. He was short and stocky, with fairly clean-cut blond hair. He removed his sunglasses and I noticed his eyes had a hard, reddish glaze to them. They had that strange, lost, glossy look. Eerie almost. I kept hoping he’d put those sunglasses back on and, eventually, he did.

I played one, but half way through he didn’t seem all that interested. His name was Jim. He sat down alongside of me and stared out at the river. I suppose the real reason he came over to me was that he had a story and he wanted to tell it.

“Damn. Sorry, man. Yeah, I spent some time out of work. How was driving a truck, as a trade and all?”

“Fuckin’ sucks. You ain’t got no friends and all you do is talk to yourself. You can’t never sleep. And they let me go in the middle of Tennessee. No loyalty. Nothing. Didn’t even give me the money for my last check. Just like that, I’m stuck in Nashville. No money. Nothing.”

I wondered how he could go straight from having a decent job to having no savings whatsoever. Something else had to have gone on. It wasn’t any of my business, though. I’ve learned there are some folks you just don’t pry on certain things. Jim seemed to be one of those types.

Jim noticed me looking at two large scars on his arms.

“That one’s from a Sawzall. Tried to cut a piece of aluminum gutter off a roof and fell. Sawed straight into my arm. Never was one for construction. This one’s from my ex-wife. Stabbed me when I tried to leave her. But look here, bud, that ain’t what I came over here for. Now you look like the hard-working American type, and I figure you might want to hear about this. The thing is, we’re in an economic crisis here. Just look around. People like yourself, hard-working blue collar workers are out of work. And you know why? Because everything we buy now days is going overseas to China. Instead of putting it back in the pockets of us Americans, it’s all going to them immigrants in them other countries. It ain’t right. No money coming back, no money to spend, no money to manufacture. We’ve eliminated all the good jobs.”

To an extent, I agreed with him. We’d pretty much sold our souls to foreign countries in the name of a few dollars and now we were paying the price. It was no different than what we’d done to other nations and I found myself remembering a poem I had once read by Pablo Neruda about the United Fruit Company and the impact it had on Chile and Latin America. Jim wasn’t bringing up anything new, but then he started to get real heated up on the immigrant slant.

“What it is is these damn Mexicans and Asians. Taking all these jobs for nothing, undercutting American wages. A man can’t earn a decent livin’ with these fuckers stealing our work. Don’t even pay taxes. I say we stick them all in jail. Yup. When they pay all the taxes they owe the government and the American people, we’ll let them out.”

I didn’t know if this was really a healthy solution, but I nodded my head and let him continue. I was kind of regretting telling him I’d been a union worker that had been unemployed. I suppose it gave him the wrong impression.

“But here’s what I’m getting at. See, I got this idea to make some money. I’m gonna start up an internet website. I’m gonna’ call it “Taking Back America.” Anyway, look here partner, this is my idea. I’m gonna go around the country with a camera interviewing people out of work, hard-working Americans, just like you. I’ll have them tell their stories on camera. Then I’ll put it up on a website and people will pay to watch the videos.”

“Isn’t most of that stuff free now days?” I asked, not trying to kill his dream, just being realistic.

“Sounds like a good idea. Do you have a computer?”

“No, not yet, I’m working on it. Just need to take some classes, get a laptop, figure out how to use the internet. Get some money coming in, get a consultant, you know.”

It was then that I shut up. My days of playing devil’s advocate are over. I wasn’t going to be the one to keep the guy from his career aspirations.

“Listen here, Seth. When it comes down to it, I really need some money to get this thing going. I swear to you, a little dough for a camera and a laptop. So what do you say? You look like someone who would be into this. You got anything to contribute towards the cause? Whatever you can spare. It’ll go straight into the business. It’ll be like an investment. I swear to you man. No bullshit.”

“Sorry, Jim. Sounds like a good plan, but I don’t have anything.”

It was a nice hustle, but I had nothing financially to offer him. I told him I’d spent most of the past week sleeping in my truck.

Jim stared out at the river for a few seconds shaking his head, not really angry that I hadn’t given him money. His mind was somewhere else. Maybe with that woman who had given him the scar. Maybe with all the money he’d blown somewhere along the line. It was hard to tell. He then got up, bid farewell, and walked down towards Broadway.

An hour later, a kid with a ragged-looking mutt on a frayed rope approached me. His name was Matt. He had a guitar on his back.

“Oh, yeah. I play here on the streets. Only Christian music, though. I play for the Lord. That’s what God wants. I’m recording here for an album. This big label, they’re all into my music. I trained under the world’s number three-ranked guitar player. I’ve got a whole crowd of regulars that come back to see me. Sometimes they throw in twenties. Guitar Gary was giving me shit for playing on the corner the other day, but screw that guy.”

“The hippy dude?” I’d seen some guy on the corner who couldn’t even muster a single chord earlier.

“Yeah, he sucks. He kept telling me this was his street. I told him to fuck off.”

I saw him scratching at a yellow and purple infected hole on his arm. It wasn’t pretty.

“Recluse bit me last night. I dug the poison out with my knife. You have to get it all. I learned all that survival shit from my dad in North Carolina. I’m going back there soon. Been staying at the Flying J with my wife in our van. I’m so sick of that place. Almost fought one of the drug dealers the other night. Kept coming up to my door, asking if I wanted drugs. I don’t do that shit. I’m done with it. He wouldn’t stop banging on the door. He’s lucky I didn’t kill him. I’m trained in karate, you know. Black belt.”

“Are you trying to stay in Nashville?”

“No way. I’m sick of living on the streets. I’m sick of Nashville. This place sucks. Once I get some money, I’m going back to North Carolina. I’ve had it here.

I stuck my hand out and petted the mutt on the top of the head. Neither of us said anything for a while.

“Yeah, good luck with everything.”

The kid was nice enough, but I had the feeling that everything that he said was a lie. Maybe just extreme exaggerations. The road allows for this, though. Be all you can be, but a little different connotation than what the green camouflage-wearing men in the commercial portray. After talking to him and Jim, I reflected that the hobo life is all and well, but nothing I wanted to delve too far into. Maybe the train-hopping punks I feel very indifferent to would beg to differ, but it was there, sitting on that bench, staring out at the river, that I said a prayer: “Please, Lord, Buddha, Abraham, well whoever it is that calls the shots, let’s not let things get to that point.”