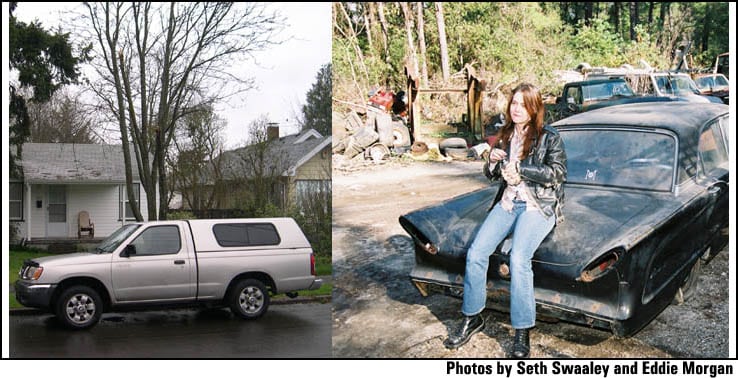 High, Low, and In Between: Chapter 1: Overture to a Ramble

The truck was loaded down with guitars, records, books, tools, and some clothes. There was a tent, a sleeping bag, a toothbrush in bad need of a replacement, and a crusted Colgate tube; the last drop of toothpaste rolled up like it was some long-lost relic that I just couldn’t part with. I had a large crowbar underneath the seat (just in case), along with whatever other bare essentials required to make a cross-country journey. Looking at the truck—the back bumper barely touching the rear tires, the front pointed upward much like a spaceship—it looked more like I was taking a trip into orbit rather than down some interstate.

My house was completely empty; the smell of cleaning spray still hanging thick and nauseating in the air. As I stared into the glistening oven that I’d managed to burn myself badly on the prior week while endlessly scrubbing the grime away, I was going through the various memories and emotions attached to a home: all the dreams and aspirations one is filled with in the beginning; and then soon some furniture goes here, some furniture goes there, a mattress and the TV, hang the pictures, paint the walls, and a year later you’re heading off to the Salvation Army, slowly depleting your material objects and hitting the road. You realize, standing there, that after doing this too many times to count, this is just a shell of sorts—some wood, plaster, paint and a roof, land in the back and big trees and the wailing of crows in the morning, and a shack with some tools in it. In a few days, other people will come in here with similar dreams and put down their furniture and sit on the porch and make friends with the neighbors and start the whole life cycle over once again.

On this particular day, though, there were more important things on my mind. Mainly, I was still dealing with a vicious headache and hangover due to going out for “a beer” the night before with a lawyer friend of mine from Kentucky and her beautiful redhead friend from San Francisco. I spent the entire night desperately—like some pimple-covered high school boy in heat—trying to get her to go to bed with me, all to no avail. One thing led to another. Cell phones were broken on stranger’s heads. Ping-pong paddles were stolen. Open tabs were left unpaid. Memories were forever lost to the dark recesses of the mind, and I was left with the all-too-familiar scene of waking up emptywalletalone on a couch in someone else’s home. Now, as I stood in my house, head in a vice, I could hardly find the energy to go to the bathroom, let alone get in my truck and drive some three thousand miles East.

I passed out on the carpet floor in my bedroom for maybe half an hour when I heard my name being called. At the screen door stood Jack and Karen, my retired neighbors from next door. They were the only folks I ever really talked to in the neighborhood in the year and a half I’d been there. Karen sometimes brought over food for me. Maybe she could see the countless cardboard boxes of frozen pizza in my trash and thought—well aware of my lack of visitors and bachelor existence—I could use some good “home cookin’.” Regardless, I was always more than thankful for her generosity. Jack, an ex-diesel mechanic and regular old handyman wizard, fixed a bicycle of mine, loaned me car parts, and always took my trash bins in for me when I was at work. Married for over fifty years, not only were they extremely nice and what seemed like still very much in love, but, together, they were a marvel in landscaping. Their lawn was immaculate: flowers and roses in full bloom, bushes cut precisely, not a yellow-flowered weed in sight. It was quite the contrast from my overgrown and pine-covered yard. Yes, I was that neighbor. Too cheap to purchase a real lawn-mower, I had the rusted push mower provided by the landlord, which, in a place like Oregon, where the grass grows like wildfire and is always wet, is about as productive as using a pair of kindergarten scissors.

“You all right, Seth?” Karen called.

“Aarrggghh,” I mumbled from the back.

I walked to the front of the house.

“Oh, we’re sorry; didn’t mean to intrude. We just saw your door open and the truck still outside. Thought you were leaving this morning. Just wanted to make sure things were all right.”

“Golly. Awfully late to be leaving, isn’t it? Well you be careful, now. Do you know where you’re going to sleep?”

I pointed to the truck.

“Wow, to be young and single. I remember those days. You remember, Jack? I say go for it. Do it while you can.”

“Yup,” said Jack. He was a man of very few words, the type who would listen to my rants about man’s existence over the fence, then give me a big smile, raise his shoulders, and say, “Hmm, well, it’s all going to shit.”

“We’re going to miss you. You were such a good neighbor,” said Karen, a little solemn pout to her lips.

I squinted and smiled, trying to put the two of them into focus. Karen and I embraced in a warm hug, and Jack gave me a firm handshake in which I felt the thick calluses of a lifetime of hard work.

I then proceeded to go back to the bedroom and sleep for another two hours. By the time I left Portland, it was after seven and dark.  It wasn’t exactly a good time to be starting on the road in as desolate an area as middle and Eastern Oregon, but, like the man said: so it goes.