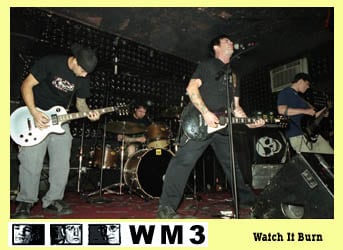 Henry Rollins was tense on the night of December 5, 2002. Of course Henry Rollins has always been the epitome of unbridled tension, but this time he, along with Watch It Burn and Maudlin, were doing it for the kids.

In this case, the kids - Jessie Misskelley, Jason Baldwin, and Damien Echols - are all in prison (the latter on death row) convicted for the rape and murder of three school age boys in the rural, Bible Belt town of West Memphis, Arkansas. The only problem, as anyone familiar with the case will tell you, is the three guys behind bars are almost undoubtedly innocent of the crime.

Misskelley, Baldwin and Echols, collectively known to supporters as the West Memphis Three, were convicted in 1993 of killing Michael Moore, Steve Branch and Christopher Byers in what police described as a "Satanic ritual murder." The three boys were convicted, based in part on a coerced confession given by Jessie Misskelley.

Misskelley, who is mentally challenged, was questioned by local police (who had no prior experience with a crime of this magnitude) without his parents or any legal representation present during the interrogation. Despite passing a polygraph test, the police lied to him, saying he had failed the test and needed to confess. After more than eight hours of questioning, Misskelley told the police a story, full of factual inaccuracies, implicating himself as well as Baldwin and Echols.

Despite a lack of ANY physical evidence tying the three boys to the crime, they were convicted, based in part on the testimony of a police "expert witness" who testified that the boys' love of heavy metal and black t-shirts was concrete evidence that they were involved in Satanic worship.

The controversy surrounding the case, which spawned two Emmy award-winning HBO documentaries, has earned the three defendants legions of supporters, including everyone from Steve Earle and the Supersuckers to Eddie Vedder and Trey Parker.

Sadly, none of the performers at the Casbah this evening had very much to say about the case other than the usual this-is-some-pretty-fucked-up-shit-going-on-and-you-need-to-know-about-it spiels. No matter, as all profits from the show went to support the defendants and their pending appeals.

Kicking off the show was San Diego's own Maudlin, whose short but tight set was a harbinger of things to come. Songs like "Last Night," "Go Around" and their closer, "Adoration," were unusually potent for a band with such a short history.

And while the prospect of Henry Rollins doing an entire night of Black Flag songs was the evening's major draw, a good percentage of the crowd had come out for Watch It Burn, another local band who has honed their chops at venues like UCSD's Che Café and the now deteriorating Aztec Bowl bowling lanes. The band's half hour set smoked with spotlight tracks like "Sleepwalk Talk" and "Zero = Zero." 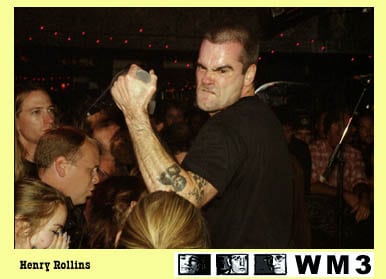 When Rollins took the stage approximately a half hour later, the place had become so packed one could almost smell the sweaty, leather-and-stale-beer stench that permeated early Black Flag shows at punk Meccas like Fairmount Hall and Wabash Hall. Not having a great deal of room in which to move, a barefooted Rollins remained relatively confined to the area of the Persian rug taped down to the Casbah's stage. Crouching then rising, looking then glaring, Rollins was every bit the pumped up uber-punk determined to pour out his angst by the fistful. As the first notes of "Rise Above" rang out, larger, older (but maybe not necessarily wiser) punks shoved their way forward, competing in a sing along that saw the smaller folk pushed up against the stage and then squeezed off to the side like melted cheese.

You could sense Rollins felt a little bit like a rat in a cage, surrounded not just by old fans or WM3 supporters, but by the knuckleheads who, in the iron grip mix of testosterone and beer-fueled machismo, make certain performers' work that much more difficult. Rather than make any speeches or provide any in-between song patter, Rollins pretty much just stuck to the classics - "Nervous Breakdown," "Room 13," "Jealous Again," "Wasted," "No Values," "Six Pack," "TV Party" - firing them off in quick succession, stumping those who didn't know the songs line by line, note by note and rewarding those who did.

To find out more about the history of the West Memphis Three, their appeals and ways you can help, be sure to visit www.wm3.org. The two HBO documentaries "Paradise Lost" and "Paradise Lost II: Revelations" are available on VHS and DVD. Also be sure to check out the "Free The West Memphis Three" benefit CD featuring the Supersuckers, X, Eddie Vedder, Zeke, Nashville Pussy, Joe Strummer and others.