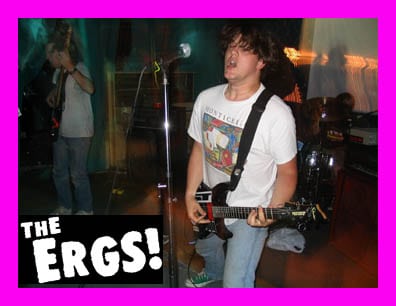 Haunted by the Ghost(s): A Column

The Ergs! looked at her funny. I took up the front-line, tried to be kind, tried to nudge her away. We'd been in this town two minutes and already the crazies had us. She kept insisting. Kept asking questions.

She spun away down the quaint business-strewn street. We all cast uneasy eyes. They widened as she turned back.

"The river's that way. It's a nice place to visit. There's the casino. But up here's the Internet cafe. It's cool. You can use the Internet for free if you buy something. You should go. You'll be glad."

She wasn't just crazy; she was helpful, too. She walked off again.

We found the Copyrights, our tour partners for the week, and muscled down the street. We went right to the Internet cafe, not because she'd said to but because the town was dead. There was nowhere else to go. As we stumbled in, our wandering guide was sipping tea.

"I know them. They're a band on tour. I told them to come here," she beamed crazy.

We slipped past and infested the chairs. Most of the eight pecked, stared, and sipped. I lay on a bench and darted about. I kept spying sideways at her. Not our guide. The cute punk girl behind the counter. The one with the rad tattoos and tugging eyes.

All great summer tours are filled with fleeting romance and heartache. So far this entire year had fallen quite short. I was starting to think I'd never find another chest-thumping girl. I was starting to forget crushing. I spied and figured the odds of her reminding were good.

I wanted to stare but knew I shouldn't, so Brett and Jeff and I sulked out the door with plans for the river. I cast a testing glance and she passed. I almost smacked the frame in awe. They never look back! It was a sign. Maybe I can crush again.

This I rambled at Brett and Jeff and the river's edge. The city seemed to have poured lots of money into doing the same with cement all about the river banks. We marveled at giant concrete steps as we sat on them and talked. I took off my San Diego-stunk Converse and waded about. Six weeks of no socks was catching up. Brett figured my feet about to rot off. But there was still a thousand miles and many days until we reached home. They couldn't rot now.

I forgot toes and rattled about her. About this year. About lack of love. About her eyes. They nodded. Jeff asked questions. He too was seeking romance in the summer roads. He was new to it. He needed advice.

"If it's meant to be, it will be," I offered begrudgingly.

We waved at leering locals then cut a new path back to our friends. They were scattered about the barren streets, stomachs squawking. A plan was hatched. Some would drive, some would walk, others would run. Food would be bought or stolen or scrounged. But where was Mike? Back at the cafe.

Only one was needed to fetch Mike. But I went too, for her. Outside the cafe a band was lugging amps. Another show? Down the street?! We groaned on our way in. Inside we found Mike and her. And nine pizzas! To feed the band! 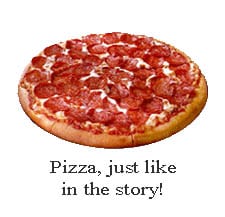 "We're playing the wrong place," I whispered while plotting.

I made a move. To talk to her or get closer or just get free pizza.

"Is the pizza place walking distance?"

Her coworker answered as I stared at arms, "No, but you can get it delivered."

I grumbled while amazed. Her arms... her tattoos! Holy shit! They weren't just rad. They were familiar. I hadn't seen them in over two years. Then they had been serving beer at the cowboy bar back in Pennsylvania. And before that plucking salad at the university cafeteria as I shot glances over lettuce leaves. Or at the punk show downtown or the art building or the park...

While my mouth hung she stared too. "Do I know you?"

Sparks shot out our mouths as we jabbered like only two familiar faces can in a desert of strangers a thousand miles from home.

"What are you doing here?"

"Well, I'm on tour... A better question is what are you doing serving coffee half way across the country?"

"I came here two years ago, liked it and stayed."

We smiled at this fateful meeting. Smiled because we'd found each other a thousand miles and two years apart. Smiled because, after seeing each other around campus and town, this was the first time we'd spoken with more than eyes. I hid my hands. They were shaking. I told her my new plans to move to the Copyrights' nearby town. She smiled and handed me her shaking email address. I tripped out the door, lips unable to catch up with thoughts.

"She looks so different! I wouldn't have known her without those tattoos! Holy shit!"

My companions smiled and pretended. But did they realize? This was amazing! I'd had a crush on her four years earlier but had a girlfriend. Then I didn't but we never spoke and I only saw her that one time at that bar and we didn't speak then either. And now it's two years later and I thought I'd never crush again but now my chest hurt. They smiled more while I pondered. This wasn't a new crush. It was an old one. Maybe all hope was lost.