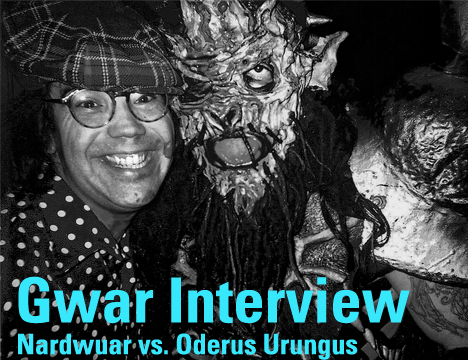 Since this interview ran in 2003, Gwar has continued their relentless attack on the human beings of planet earth. From their home base of Antarctica (or Richmond, VA, depending on who you ask), these mutant maniacs have not let anyone or anything deter them from their ultimate mission of complete annihilation and degradation of all humankind. And from 2003 to the present day, the world is still reeling from the antics of the Gwar.

In 2004, Gwar’s most overtly political (and shortest) album, War Party, was released to positive acclaim. In early 2006, the members of Gwar were forever immortalized as the gods they are in the form tiny action figure versions of themselves. Not long after, Gwar opened a gallery show called “The Art of Gwar” at Art Space gallery in Richmond. The show displayed the many props, costumes, and various forms of art produced by Slave Pit, Inc., Gwar’s artist collective/production company (founded by that Dave Brockie person Gwar’s leader Oderus Urungus would, for some reason, always get asked about). Later that year they released Go to Hell! and followed it up with two years of performing at the Sounds of the Underground tour.

Over the next few years Gwar expanded their global invasion by making popular technology their slave, raiding computers and TV screens in the process. In 2010, Oderus Urungus hosted the “Crack-a-Thon” at the MF Gallery in Brooklyn, NY (a charity for kids, or for crack money for Oderus? You decide.). A second Crack-A-Thon followed in 2011—both of which were available for live stream on the MF gallery website.

In 2012, a TV sitcom called Holliston, created by horror filmmaker Adam Green and starring Oderus Urungus, debuted on the FEARnet cable TV network. Oderus starred as Green’s imaginary alien friend who lived in his closet. Gwar continued their digital assault on the masses with a live broadcast of their 2013 Fate or Chaos tour, which was then followed by their thirteenth studio album, Battle Maximus.

Sometimes, though, life can be rough even for almighty war-gods. On November 3, 2011, Flattus Maximus (guitarist Cory Smoot) was found dead by his fellow band members on the band’s tour bus. The cause of death was complications from coronary artery disease. Flattus Maximus was retired out of respect to Smoot, and Brent Purgason of Cannibal Corpse took over guitar duties, portraying Pustulus Maximus. Donations can be made to the Cory Smoot Family Fund.

March 23, 2014 also marked yet another unfortunate day for Gwar. Oderus Urungus—the last original member of Gwar—made his great return to space. Rumors of his disappearance have been varied (a new character named “Mr. Perfect” claims to have stolen Oderus’s immortality and impaled him on his own sword). In his wake, a new leader comes: the antlered-and-uddered Blothar (former bassist Mike Bishop/original Beefcake the Mighty), who is on the search to find Oderus in the form of Gwar’s most recent tour, Gwar Eternal.

Oddly enough, at the same time, that strange Dave Brockie fellow passed away unexpectedly at the age of fifty. The other members of Slave Pit, Inc. have created the David Brockie Fund in his memory, which is a charity fund for the encouragement of future talent and the preservation of Dave’s body of work.

No words yet on if an official Oderus Urungus charity will be created to continue raising funds for crack money for Oderus as he floats through the galaxy for all eternity.

The fifth annual Gwar-B-Q continued as planned in August 2014, where an official viking funeral was held for the late, great master Oderus Urungus (and one for that Dave Brockie guy, too, for some reason…). With his signature cuttlefish prominent for all to see, Oderus went in a blaze of glory as any good evil leader and intergalactic warlord should.

But Gwar continues on. They later played the 2014 Riot Fest in Chicago and debuted a new character: Vulvatron, who left the group following the Gwar Eternal Tour—though she may return in the future. In another furthering of their immortalization, January 2015 saw the opening of GwarBar, an upscale dive bar, opened in Richmond.

Gwar can currently be seen on the “Road to Gwar-B-Q” tour, leading up to their sixth annual Gwar-B-Q on August 15, 2015, featuring Cro-Mags, Clutch, The Descendents, The Dickies, Cancer Bats and more, where they will be celebrating their thirtieth anniversary as a band of fear-mongering space menaces.

Things may have changed for the Scumdogs of the Universe, but one thing still holds true: Gwar lives. –Jamie Rotante, 2015

Nardwuar the Human Serviette Vs. Gwar

Nardwuar: Who are you?

Oderus Urungus: I am Oderus Urungus, lead singer of the most dangerous band in this or any other universe… Gwar!

Nardwuar: Oderus, the bitch is back?

Oderus Urungus: Yes, the bitch (Slymenstra Hymen) is back. She’s here to claim a bloody vengeance. She wanted to castrate me, chop off my penis, and put it in a zoo.

Nardwuar: What was she doing before? She was in the circus?

Oderus Urungus: She was in the circus, the girly freak show circus, doing things in Hollywood, with her Hollywood friends, but now she’s back. As I said, she wants to chop off my pee pee.

Nardwuar: Oderus, are you the first band ever to spew on the audience?

Nardwuar: But you guys have new spew chambers?

Nardwuar: Oderus, is your cuttlefish, is it in the Hard Rock Café?

Oderus Urungus: It was in there before, but they made me take it out. But look at that thing [points to his cuttlefish], look at it, dripping with infected East Nile Virus. It’s a beautiful thing, a beautiful thing.

Nardwuar: What is your view on Viagra? What do you think of Viagra?

Oderus Urungus: Well, I don’t need it personally, but if it helps midgets who are impotent to fuck animals in the yard, then I think it’s a good thing, as long as the animal gives consent.

Nardwuar: Oderus, who designs your loincloths?

Oderus Urungus: He does! [Points to another GWAR member]

Oderus Urungus: This person needs to be killed. Look, touching himself like that, what is that? What is that shit? He’s fat, he’s fat, fat, fat.

Nardwuar: Oderus, you are Canadian. What is a Canadian killing dinosaurs for?

Nardwuar: What is a Canadian killing dinosaurs for?

Oderus Urungus: What, what?

Nardwuar: Why are you killing the dinosaurs?

Oderus Urungus: Because they drove cars. I didn’t like cars.

Nardwuar: But they are from Alberta, The Badlands?

Oderus Urungus: They wore shoes. I don’t like shoes.

Nardwuar: What about the movie Mystery Date, Oderus? Wasn’t that filmed in Vancouver?

Oderus Urungus: Stupid. I never saw it, I never saw any of the movies we were supposedly in, and we never made a fucking penny.

Nardwuar: Oderus, what are the new ways to kill people that you guys have developed?

Oderus Urungus: Ah, well, it’s hard to, you know, when you kill people so many ways for so many years, but the more interesting way that we’re killing people is slowly through alcoholism.

Nardwuar: If the guy from Lord of the Rings walked out, how would you kill him?

Oderus Urungus: Which one?

Nardwuar: Tell me about your influences. Wendy Williams, how important is she?

Nardwuar: Oderus, what are the similarities between Gwar and pirates?

Oderus Urungus: Parcheesi and four rows over on the Jeopardy board.

Nardwuar: Oderus, did Gwar once do a show with absolutely no music, just acting it out?

Oderus Urungus: Yes. I would do my interpretive mime. Would you like to see it?

Oderus Urungus: [Silence, then sounds of a beating/struggle] That was JonBenet.

Nardwuar: Are there any challengers to Gwar at all, Oderus?

Nardwuar: Are you mad about the song “Gwar, what is it good for? Absolutely nothing! Gwar!”

Oderus Urungus: [sings] “Gwar! What is it good for, absolutely nothing!” … and that’s fine with me!

Oderus Urungus: You are the most annoying human I’ve ever met! [Oderus then grabs Nardwuar by the neck]

Nardwuar: Thank you, Oderus, thank you, I appreciate that. Now, what was it like playing with Thor tonight?

Oderus Urungus: Thor is a little heavier than he used to be, but very, very, fun, funny… but he should get rid of the chick.

Nardwuar: Oderus, golf. What are the perks of being in Gwar? You play celebrity golf with Tommy Lee?

Oderus Urungus: Aren’t you interviewing any of them? [Points to other bandmates]

Nardwuar: Well, okay, tell me which one I should talk to?

Oderus Urungus: No, shut up. Just interview me, I’m the funny one.

Nardwuar: Now tell me about playing golf with Tommy Lee.

Oderus Urungus: I didn’t play golf with Tommy Lee. He wouldn’t get in the same party with me. He wouldn’t ride around in a golf cart. But I did go to his house and we went to the hot tub, and drowned a child.

Oderus Urungus: No. There’s no role-playing game, or is there? I don’t know. Look at those guys over there looking at me like I’m crazy. There’s games, there’s products, there’s merchandise. Be assured we sell millions of them and we never see a fucking penny. I’m paid in crack.

Nardwuar: Were you a spokesman for CircuitCity, Mr. Oderus of Gwar?

Oderus Urungus: Yes, yes. There’s no level to the degree of prostitution I will whore myself out to in order to continue my existence as a fucked-up drunken piece of shit.

Oderus Urungus: It’s a fake. There isn’t even a moon! Everyone knows it’s made out of cheese.

Nardwuar: Oderus, why did you sink Atlantis? Why innocent people?

Oderus Urungus: Because I needed to usher in the era of the railroad.

Oderus Urungus: So what? We raped Liv Tyler in the bathroom, and it’s not rape if she enjoys it halfway through.

Nardwuar: What about being in thirtysomething, that TV show? That was pretty good, eh, Oderus?

Oderus Urungus: Oh my God, what are you on, anyway? Thirty, forty, fifty, seventy, eighty, a million, who gives a shit?

Oderus Urungus: I don’t know. The World Maggot. Okay? I’ve got a show to do, could we fuckin’ hurry this up and finish this shit?

Nardwuar: Last question for you, Oderus.

Oderus Urungus: Thank you. [Oderus takes Nardwuar’s hat and puts it on his head]

Nardwuar: You hate hair farmers. Gwar was formed as a reaction to the hair farming bands, right?

Oderus Urungus: Well, actually, the hair farmers were using way too much hairspray and the ozone there opened up and as a result we were born, and as much as we hate them, we still love them.

Nardwuar: So why did you have Sebastian Bach of a hair metal band in your video?

To hear and watch this interview go to www.nardwuar.com

Gwar playing at the Sherman Theater on their Gwar Eternal Tour, October 2014