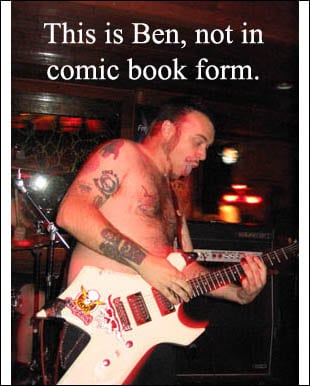 At first glance, the comics in Snake Pit are charming and unassuming. Every day of Ben Snake Pit's life is distilled into three panels. Many days, he doesn't do much beyond work at a video store, go home, get high, and watch movies. Other days, he goes to parties, where all of the inhabitants turn into monsters. But then something strange happens. Months of his life whiz by, and it's almost impossible to not start caring for Ben. You start realizing that he's an extremely decent guy, cash poor, yet living a life rich in experiences. You start rooting for him when he joins a band, and want to console him when he's having lady trouble. It's those sneaky yet real hooks of empathy, wonder, and enthusiasm that'll make you fly through his self-titled book, which chronicles three years of his life, three panels at a time.

And in case you're wondering why we're running an interview with one of our own contributors, it's because we gave this interview to Clamor Magazine and we have no idea if it ran or not. And also because we're egotistical assholes who like to fuckin' pimp our shit.