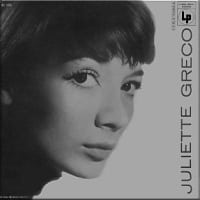 Juliette Greco was the inscrutable, unsmiling face of French existentialism in the 1950s and 60s -- the Beat Generation's equivalent of Marlene Dietrich or Edith Piaf. In her bohemian realm of Saint-Germain-des-Pres, Left Bank Paris's intellectual epicenter, the Parisian singer and actress ruled as black-clad high priestess, the elite muse revered by highbrow literary bad boys like Jean-Paul Sartre, Albert Camus and Jean Cocteau. Delivered in a cracked, brandy-saturated voice, Greco's best songs (usually written by Serge Gainsbourg or Jacques Brel) are wrist-slittingly bleak laments like "Les Amours Perdues," "Strip-Tease," "Les Feuilles Mortes," and "Bonjour Tristesse," on which she makes her own depression sound like an almost desirable state of mind. 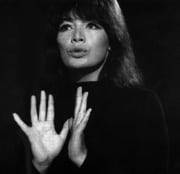 Greco's rise to stardom coincided perfectly with the specific post-war mood of disillusionment, alienation, and new possibilities, when European art and literature (like the existential writers and the newly stirring nouvelle vague filmmakers) were questioning old values and struggling to express the horrors witnessed in World War II (or what film critic Pauline Kael once jokingly dubbed "the sick soul of Europe"). It was something of which Greco (born in 1927 in Montpellier) had first-hand knowledge. Her father was Corsican (hence her dusky Mediterranean appearance); he abandoned the family when she was still a child. Greco's mother and sister Charlotte participated in the French Resistance movement during the Nazi occupation in World War II and were arrested. In 1943, the 15-year-old Greco herself was arrested by the Gestapo and interned in a prison camp for a month. Her cellmates were three prostitutes. For the lapsed ballerina with a strict, sheltered convent education it must have proved an eye opener.

Upon her release, the homeless street urchin found herself adrift in Paris. Greco claims she was so traumatized she didn't speak for a year. In the Gitanes -- smoky subterranean caves (cellar nightclubs) of Saint-Germain, where former members of the Resistance congregated -- she found a spiritual home. The tough, self-contained adolescent cut a distinctive figure (due to poverty, she wore men's oversize thrift shop clothes; her Lily Munster complexion was so ghoulishly pale Pablo Picasso gushed, "You moon bathe while others sunbathe.") and found herself embraced by writers, poets, singers, and intellectuals as their kindred spirit and muse. In photographs of the gamine-like Greco at this point, she resembles an earthier, Gallic Audrey Hepburn. It was the existential philosopher Jean-Paul Sartre who encouraged her to sing, personally selecting the poems that would be adapted into her songs. Her singing debut at the Le Boeuf sur Le Toit nightclub created a sensation. It obviously didn't hurt that Greco -- with her Nefertiti profile and almond shaped eyes -- was morbidly beautiful and possessed a dramatic, almost Vampira-esque, dress sense (stark black clothes, pageboy hairstyle, cadaverous white lipstick, winged Cleopatra eyeliner) that would prompt female beatniks worldwide to iron their hair and purchase black turtlenecks in emulation. Present at the club that night was an upcoming young American actor called Marlon Brando; he gave her a lift home on the back of his motorcycle. Her first record ("Si Tu T'Imagines") was released in 1949 and cast a spell over France. The gravely composed chansonniere became the romantic ideal for Europe's post-war angry young men, the pin-up on every art student's garret wall. When intellectual types returned home to have a heated debate over the artistic merits of the new Jean-Luc Godard or Michelangelo Antonioni film over a bottle of vin rouge, the latest Juliette Greco album inevitably provided the soundtrack.

Gradually, Greco would literally emerge from underground, graduating from playing basement beat dives, like Le Tabou and La Rose Rouge, to headlining choice concert halls like Paris's Olympia and the Waldorf Astoria in New York. An emerging generation of besotted French songwriters (including Serge Gainsbourg, Jacques Brel and Charles Aznavour) tailored world-weary melancholy protest ballads to her throatily sensual, almost guttural alto tones. Greco's defiantly rebellious personality, bad girl image, and turbulent, unconventional private life would provide the subject matter for songs like "Je Suis Comme Je Suis" ("I Am Like I Am"), "Je Hais Les Dimanches" ("I Hate Sundays"), "Dieu Est Negre" ("God is Black"), and the (in their context) sexually frank "Deshabillez-Moi" ("Undress Me") and "Dans Ton Lit" ("In Your Bed"). Greco obliged by marrying three times and conducting affairs with fellow French stars like Sacha Distel (of "Rain Drops Keep Falling On My Head" fame) and Serge Gainsbourg, earning herself a reputation in the popular imagination as 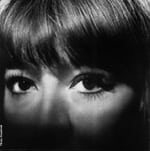 a croqueuse d'homme (man eater). In 1965, she made a highly publicized suicide attempt: The front page of Paris Jour pictured Greco, emotional and disheveled in a leopard skin coat, with the headline "Juliette Greco Tente De Se Suicider." Greco was also making an impact as an actress. Her smoldering screen debut was as the antagonistic queen of the Bacchantes in Jean Cocteau's 1949 surreal art house classic "Orphee." (Cocteau had reportedly based the role on Greco's own confrontational personality.) By 1956, Greco was so in demand she found herself simultaneously filming "Paris Does Strange Things," acting onstage at night in the lead role of the play "Anastasia," and afterwards, singing at nightclub engagements until early the following morning.

Perhaps most notably, in 1949, in an example of genuine rebel grit when interracial relationships were hardly the norm, Greco embarked on a love affair with the visiting black American cool jazz hero, Miles Davis. When they met he spoke no French and she spoke no English. In his autobiography, Davis dreamily recalled how they used to walk along the Seine kissing and holding hands. Their relationship would last on and off for years, resuming when both were in the same city. When the couple was re-united in New York in 1954, they were confronted with overt American racism when a restaurant maitre d' refused to seat them together: Greco spat at him. She would leave a lasting impression on Davis both professionally and personally. It was Greco who introduced him to her friend, the filmmaker Louis Malle. He commissioned Davis to provide a cool jazz soundtrack to his 1957 film "Ascenseur Pour L'Echafaud" ("Lift to the Scaffold"), a turning point in Davis's career. Less happily, Davis blamed his anguish over their separation when he returned to New York for his heroin addiction, the start of a lifetime of substance abuse. He would eventually become a pimp to finance his drug habit.

1957, though, witnessed the unlikeliest episode of Greco's career when, as prot*g*e (and mistress) of married cigar-chomping 20th Century Fox studio executive Darryl F. Zanuck, she endured a two-year stint as a Hollywood starlet. Zanuck had seen her photo in Time magazine and became infatuated. In his book Hollywood Babylon II Kenneth Anger claims that "Of all Hollywood's 'piggy' moguls, Zanuck was the biggest casting couch hog." He certainly had a history of (unsuccessfully) trying to turn his mistresses into film stars. (Ever heard of Bella Darvi? Irina Demick? Precisely.) A supporting role in a prestigious, big-budget adaptation of Ernest Hemingway's The Sun Also Rises (1957) marked Greco's American film debut. Unfortunately, even with Zanuck's patronage the rest of her films are mostly long forgotten B-movie trash: by the mid 1950s Zanuck's influence (in fact the old Hollywood studio system as a whole) was on the wane. While never becoming a major American star, Greco nonetheless worked with some heavy weight directors (like John Huston and Otto Preminger) and co-starred alongside the likes of Errol Flynn, Tyrone Power, Ava Gardner, Ingrid Bergman, and Orson Welles before ditching her much-older Hollywood sugar daddy and successfully resuming her singing career in France. Ultimately, the most permanent legacy of her Hollywood period is the plastic surgery Zanuck insisted she have. In the Hollywood starlet cookie cutter nose job convention of the time, her Roman nose was whittled away to just two nostrils. When he saw her, Miles Davis was horrified by Greco's altered appearance: not just that she'd mutilated her nose, but that she was so willing to compromise her ideals and individuality for stardom.

Now in her mid-70s, Greco still wears her signature black clothes and remains an iconic grand dame figure in France (she was awarded the Legion d'honneur, France's highest award for cultural achievement, in 1984), a fragile lifeline to a sepia-toned, romantic conception of French-ness that no longer really exists. (For example, in recent years Greco's old beatnik playground, the artily derelict Saint-Germain-des-Pres has been ruthlessly gentrified into a virtual luxury shopping mall.) When I saw her perform last year in a rare appearance in London, Greco was in fierce, imperious form. The crowd of 1,900 (predominantly French) treated her like the second coming. Still beautiful and sheathed in the kind of bat-winged black dress Morticia Addams would covet, she visibly seethed with emotion. On a rendition of Brel's "Ne Me Quitte Pas," she stripped away all melody and turned it into a savage plea, actually stomping her foot and shaking her fist in a diva's wrath. All of this may sound pretty un-rock'n'roll. And certainly Greco's music -- typically laced with mournful accordion, gypsy violin, and strings -- is wildly sentimental in the ultra-French chanson tradition that's very much an acquired taste. But both Marianne Faithfull and the late Nico (the Velvet Underground's erstwhile German chanteuse) were hardcore fans, re-interpreting Greco's elegant high European gloom and austere stage presence for a wider rock audience. Faithfull and Nico, of course, would subsequently launch their own legion of imitators. Today, every trip hop diva who's ever bared her anguished soul -- in fact, everyone who ever wore black and smoked a cigarette onstage -- owes Juliette Greco a debt.