All photos by Toby Tober

A punk rock show at a dj/rave/dance club? I found this to be very odd. However, when I got inside, I found there was a rectangular bar in the center of the place that you could actually sit down at. This is quite unusual in Atlanta. Most places I see shows at have bars, of course, but nothing you can actually belly up to. As a result, I am left standing there for the duration of the evening, which might be three to four hours sometimes. I’m a fat old man. I hate that. My bones tire from my girth after about an hour or so. So, it was a breath of fresh air to find this club fat man friendly. So, as the bands took time to set up, I sat down, reached across my belly and gladly enjoyed my beer without having to use my legs like a sucker.

Mother Fucking Tourettes was first to play. Before the show, I had talked to the girl setting up the show for some general info. At that time she informed me that she was performing in the first band. She mentioned that it was kind of experimental and that she would be doing some performance art in which, at one point, she would be shooting fire out of her pussy. This immediately got my attention and had my mind filled with all kinds of pictures of fire-breathing pussies. I knew I had to get there early for that. So, as I waited outside the doors, alone, for the place to open so I didn’t miss my chance at seeing my very first Dragon Pussy, I wondered, “What does she use?” “Flammable substances can’t be healthy for the longevity of a vagina.” “Does her pussy look like one of those creepy burn victims you see with the scarred and deformed skin?” “Hey, who cares, I’m going to see some pussy.” (giggle, giggle)

10 o’clock finally came around. Gladly paid my five dollars, got my two-dollar PBR, and made my belly rest happily against the bar in a sitting position. Out comes this local four-piece band with a cute female singer. The curiosity is enough to pry me from my stool. I get right up front. The band began to play. No sign of the Dragon Pussy. They had a disjointed, experimental, jazzy type sound. It was very obvious that all the musicians were quite talented. The singer kind of did this poetry/rap/stream of consciousness thing vocally. I don’t usually listen to this kind of stuff, but it seemed like an easy way to slowly start the evening off. After they played, the bassist, Jason, informed me that it was all completely improv. No person in the band had any plans on what to do. They just got up there and did it. Knowing this made the experience much more enjoyable and made me appreciate their talents even more. The fact that Jason, who used to be in a hardcore punk band called Clocked In, showed what kind of diversity he had.

Near the end of the set, the singer lights these sticks on fire and proceeds to put them in her mouth. After doing this for a few minutes, up went the skirt. To my disappointment, she had underwear on and a little canister strapped to the inside of her leg. She pressed it and had fire shooting out about three feet from her crotch area. “Well, crap!” I said as the thought of an actual fire breathing pussy was extinguished. Well, at least the band was enjoyable. The Dragon Pussy, like the Loch 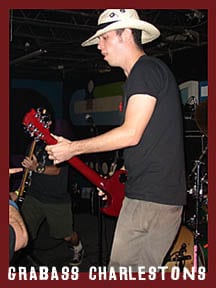 Next up was The Carbonas, a local act that seems to end up on EVERY fucking line up I see. They have that retro rock’n’roll punk sound (for example, The Hives) that a lot of bands seem to be trying to do now. Nothing about it really grabs my attention. This was very evident when I chose to watch the DVD of The Family Guy, instead, that was playing at the opposite end of the club by the merchandise table, and I’m not a big fan of that show.

The Tim Version were up next. They were great. I never expected such energy and passion to come out of a man wearing a brim hat and flip-flops. They played and sung their asses off. I’m very familiar with their music and was delighted to hear the majority of their set was new songs. They also did an awesome cover of an old Dinosaur Jr. song called “Freak Scene” from the Bug album. After they played, I discovered that those new songs were from a new CD they had for sale, Prohibition Starts Tomorrow. I instantly grabbed it. Been listening to it ever since and it’s awesome. Has a great cover of Merle Haggard’s “Swinging Doors” on it. I tried to pick up a shirt, but they had no XL. Damnit, fat men like The Tim Version too!

North Lincoln were up next. I was told that they were just added to the tour. They were a good band. Fit in well with The Tim Version and Grabass Charleston’s sound, but not quite as good as those bands. They would have done much better to go before The Tim Version. It would have made for a much better progression. I did enjoy them but they couldn’t hold a candle to the two headliners. 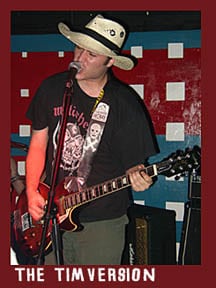 I think there was a drunk guy in the crowd who realized this and took it upon himself to spice things up a bit. Down went his pants and up on stage he went. Now I’m trying to enjoy that band in peace, and all of a sudden I’m looking at the nastiest, hairiest ass I’ve ever seen. He was dancing around and bending all the way over. All I saw was hair and balls. It immediately reminded me of Sean’s brother Scott’s name for such a horrific display – The Double Hogback Growler. That’s a monster I never like to see. All of a sudden, giving in to all the nasty excitement, this girl falls back onto the floor with a skirt on and lifts her legs in the air waving them around wildly with no panties on. That got my attention. As I quickly fumbled for my camera to capture such a wonderful display of Drunk Punk Girls Gone Wild On A Floor Covered In Beer, down came the legs and I had nothing left but the beautiful memory of it, due to me being too slow on the draw. 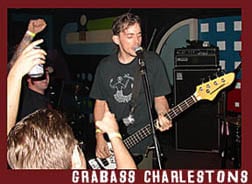 Grabass Charlestons took the stage. I’ve been eagerly awaiting their performance. I can’t stop listening to their first split CD and their new CD, The Greatest Story Ever Hula’d. Like The Tim Version, they played an incredible set, putting everything they had into it for the modestly sized crowd mostly composed of the other bands (I’ve got serious issues with Atlantans taste in music, but that’s another story). Having heard all the music they have out, they played a bunch that I have never heard before and it was all awesome. I was happier than a pig in shit listening to them. PJ later told me that they have fourteen songs ready to go for yet another album. Woo hoo!!

I believe this is the end of their tour, but I’m sure it won’t be long before they tour again. You can keep with their latest news about touring and releases at their websites, http://www.home.earthlink.net/~timversion/ and http://www.grabasscharlestons.com/. Neither band disappoints. As a matter of fact, they will exceed your expectations. Say hello to them at the shows as well. You couldn’t meet a nicer group of guys.