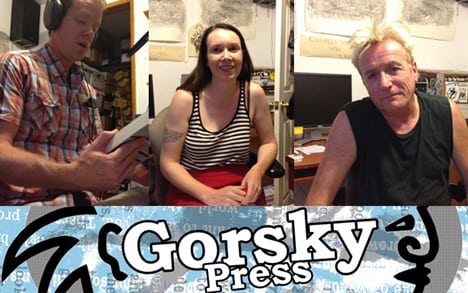 Each month, Gorsky Press will be posting up three new short stories for free download and streaming.
http://gorskypress.bandcamp.com

Patrick O'Neil reads "Something's Wrong"
Ex-road manager for TSOL, Flipper, and Subhumans reads about robbing a corner store and uses a therapist visit as an alibi for dodging the cops. (http://www.facebook.com/pages/Patrick-ONeil/237337516342648)

Sarah Tomlinson reads an excerpt from The Year of Mister Nobody
Self-professed “nerd for music trivia,” Sarah reads a piece embodying the spirit of The Rolling Stones going to Marrakesh in 1967, after a drug raid on Keith Richards’s home. Infidelity and the future of the band hang in the balance. Unsavory circumstances abound in this novel-in-progress.
(http://www.sarahtomlinson.com/)

Scott O'Connor reads an excerpt from Untouchable
A trauma site cleanup technician who’s lost his wife and is raising a child by himself, Untouchable is set in Los Angeles in the shadow of Y2K. This is the opening chapter of the novel.
(http://scott-oconnor.com/)

If you enjoy those stories, check out the first two rounds:

Ben Loory, “The Man and the Moose”

Jim Ruland, “The Jungle for Real”

Todd Taylor, “We Called It War”