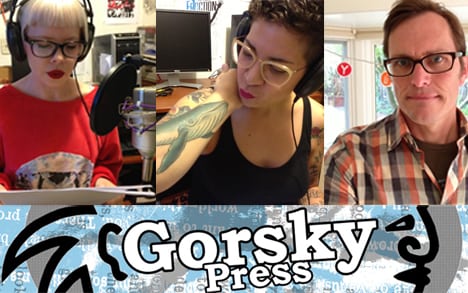 This month, we proudly present:

Kim’s Fairytale Wedding is a faithful transcription of Kim Kardashian’s internationally televised wedding to basketball player Kris Humphries, after which she filed for divorce from Humphries within 72 days. Kris Humphries has been erased from the text.

Todd Pound reads an excerpt from All & Nothing, a novel-in-progress.

All & Nothing stars an aspiring editorial cartoonist suffering professional and personal crises amid the waning days of the 2004 Presidential campaign. It's a somewhat cautionary, romantic tale about a nagging tendency of young men to second-guess most everything, particularly big decisions with long-term implications. The story features pages of the protagonist’s sketchbook interspersed within the text, along with odes to Peanuts, baseball, the punk zine Cometbus, The Mekons, Northern California surfing, and, especially, the sound advice of grandmothers.

This snippet features a reunion of sorts between the story’s protagonist, Charlie, and an old flame, Kate. While the surfing and punk scenes have been well received by readers, I really wanted to try reading this section. It was a pain-in-the-ass to write.

Todd Pound is a writer, illustrator, and designer living in Northern California. Right this very second, he is probably playing baseball with his two sons, while humming a Mekons tune and wondering (selfishly) if the surf is any good.

If you enjoy those stories, check out the first six rounds of Gorsky Press Short Stories: