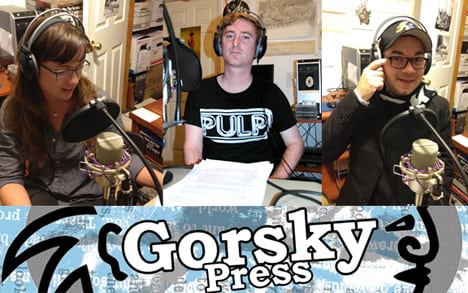 Amelia Gray reads “On the Illness”
Collection in progress, online at Vice.
A post office employee with a curious compulsion to vomit after every sentence he speaks meets a woman in the post office.
http://www.ameliagray.com/, https://twitter.com/grayamelia

J. Ryan Stradal reads “The Augustus Mackinnon Story” from Hobart (issue #6), and forthcoming in Outpost 19’s anthology The California Prose Directory.
A recent college graduate with a degree in Poetry takes a job as a furniture mover and finds that his passion bleeds into his occupation.
http://www.jryanstradal.com/, https://twitter.com/jryanstradal

If you enjoy those stories, check out the first three rounds:

Sarah Tomlinson reads an excerpt from The Year of Mister Nobody.

Ben Loory, “The Man and the Moose”

Jim Ruland, “The Jungle for Real”

Todd Taylor, “We Called It War”