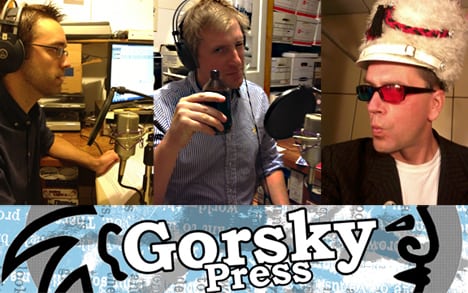 Rev. Norb reads the preface ((aka "Pogologue")) to his book, THE ANNOTATED BORIS: DECONSTRUCTING THE LYRICAL MAJESTY OF BORIS THE SPRINKLER ((AND OTHER TALES AS THE NEED ARISES)), which constitutes pages 3 thru 5 of 288 or so. He has a cold and learns new words on the company dime!
Bulge website: $5.99 a year! Can't beat that with a rake.

Justin Maurer reads “Down on the Boulevard” from his short story collection, Seventeen Television. The story is about Justin's first day of work at a Hollywood tour bus company.  His new boss, a raving lunatic, introduces him to a world of pain.
Blog * Facebook

Gabe Durham reads “Tough Love Couples” from Meanwhile, a book-in-progress. Meanwhile is a manuscript about the perils and benefits of living in an America where each of us has windows in the lives of one another and access to the whole of human wisdom. The book collects stories and facts and stats as it snowballs through a single day in the author’s life. This chapter discusses Courtney Stodden, Jezebel comment boards, the ages at which young people can marry, VH1’s “Tough Love Couples,” divorce, “Whitney,” and “Keeping Up with the Kardashians.”
Blog * Twitter * Facebook

If you enjoy those stories, check out the first four rounds: