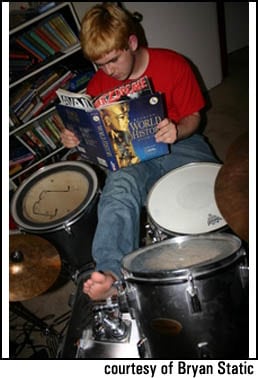 There were two questions I absolutely hated begin asked as a kid. Possibly because I had an advanced understanding that adults were assholes (Never grow up, kids! Always rock out to Raffi!) The questions, in order of hatred (#1 being absolute disgust and #2 being utter loathing), go something like this:

1) What’s your favorite color? “I am not racist or biased in any sort of manner. People of all races can be my friend.” “No, no, son. I didn’t mean people. I meant… if you could paint your room, what color would it be?” “I wouldn’t. It seems like a good waste of paint.” I can’t remember if this conversation actually happened, or if it just was my brain making an amalgam of my thoughts and speech. The answer was actually red, and I didn’t seem to understand why people cared so much about what color I fancied. Was it some kind of psychological test to see if I was a future killer? Once, some woman seemed shocked I chose red, as if blue or green were the only acceptable answers. Nowadays, though, everybody’s favorite color seems to be black.

Funny story about favorite color, as far back as I can remember (breakfast), my favorite color was red; blood red to be specific. So, being the logical genius that all people are at five years old, I assumed everybody’s blood was their own favorite color. One day, my dad was doing his favorite pastime of doing handyman things around the house. He was fixing this week’s broken object in the garage. The work warranted the use of a giant saw that particular afternoon, and one way or another he managed to cut himself. Of course, being the little idiot that I was at the time, I didn’t automatically think “DANGER! DANGER! BLOOD=PAIN! GO GET HELP!” I thought, and verbally expressed “DAD! WHY ISN’T YOUR BLOOD PURPLE?!”

2) What do you want to be when you grow up? I have a simple reason for hating this question: I could never figure out the right answer.

Every kid seems to give the same damn response to said question. There’s only so much variety you can have with limited understanding of the world (“I want to be a vegetarian!” “Don’t you mean veterinarian?” “Yeah, that!”). Of course, I’m sure almost every kid goes through either a doctor phase or an “I WANNA BE FAMOUS, BITCH!” phase. Sometimes both. I’m sure there were even a few kids that had an “I wanna be a famous bitch!” phase. I never had a doctor phase. Growing up, I had dreams of being a rock star, but never learned to play guitar or drums until I was a teenager. I spent most of my time in elementary school air-guitaring and starting bands with people who also didn’t know how to play. I still seem to do both from time to time.

My father is and was a stand-up and improvisational comedian, who did some acting on the side. He sparked my interest in being a thespian, which I held in high hopes for a few years, but the dream was ultimately crushed when I found out how vain and selfish a majority of major actors were. Not wanting to be associated with such trash, I chose to pursue something else. Though my dreams of being a rock star were never really destroyed, I realized around ninth grade that my chances of being a punk rocker and making enough money to sustain my life were smaller than a brick floating in mid-air propelled by nothing other than my willpower. I still dream that dream, and fuck no, I’m never waking up.

I never showed much interest in school. Every year or two, my attention would be caught by some academic subject, but would soon fade. I was insanely good at math from third to sixth grade, and then I gave that up. I began spending that time to write songs. Horrible, horrible songs. I loved science until about ninth grade when we got into physics, which I’m sure you all know is possibly the second most boring subject in the world (the only one beating it is Migrating Habits of Albino Pack Mules 101). In ninth grade, I couldn’t have cared less about school. I spent all my time writing a comic I dubbed “Rather Disturbed,” about two talking tennis balls with arms and legs who liked to mutilate each other. In tenth grade I somehow found a new interest for world history. I was absolutely enticed by it. I excelled in the class and just fell in love with the subject. I began to realize how important of a role teachers had in shaping kids’ lives. They helped shaped kids’ personality growing up and helped them on their way to doing what they wanted later on in life, but only if the kids were willing to accept their help. Of course, not all teachers care. Like my eighth grade U.S. History teacher, who only seemed interested in making us waste an entire rain forest for assignments that she only graded on completion.

I had it. The answer! The glorious answer! I wanted to be a teacher! (Oh, come on, you all saw it coming from a mile away.)

I could picture it vividly in my head. I’d be that weird teacher who comes to work in punk shirts and would know more about music than most of his students. I’d bring in my guitar and play songs about the Spanish Inquisition to help my kids understand the subject. I’d play Situationist Comedy (or hopefully by that time I’ll be playing C I V I L W A R, I’m not saying Dillinger Four should rush, but COME ON, it’s been five years!) as the kids walk into class. I’ll think of weird projects for the kids to do (Make a video reenacting the Battle of Hastings using only two people as actors and a duck, due by Friday.) and tell them the stories that history teacher’s tend to leave out (like how Shakespeare used penis jokes in Romeo and Juliet). I’ll be friends with the weird kid who wears The Lawrence Arms’ T-shirt and never talks. I’ll be the coolest fucking teacher ever. I don’t care much about the pay. I just need enough extra for my music and my Razorcake subscription.

As of now, I’m still in 10th grade, and I have no idea if this whole idea will pan out at all. For heaven’s sake, even with my incredible passion for punk rock now, who knows what kind of ideology or music taste I’ll have in ten years? I could give up on all of this. The future is uncertain, but not to me, because I finally have an answer to that damned question. I want to be a teacher. I never wanted to be a fire truck anyway.