When I heard that the New York peace punk band, A.P.P.L.E., was reuniting and touring the west coast, I was pretty excited. They were one of the first bands that introduced me to the whole anarcho and crust scene when I was a freshman in high school. I decided to go to the show at Rabid Records because it was only six bucks, and about twenty minutes from my house.

I showed up right as the show was beginning. The store was pretty compact, reminiscent of Headline Records, but was the perfect setting for a small show like this. There was a hefty collection of band T-shirts covering one of the walls, and a plethora of rare books and old zines in glass showcases.

The first band to play was called God Equals Genocide. I’ve seen these guys at least ten times, and this was by far the best performance I’ve seen by them. They blazed through about ten or eleven songs, with the drummer and guitarist/singer switching positions between certain songs. Their mix of abrasive and upbeat folk anthems with thrashy punk is highly contagious. The alternating male/female vocals sum up a perfect breath of fresh air for the music scene. Unfortunately, a number of attendees of the show were outside, smoking cigarettes, probably discussing their favorite Punk Core Records bands, while they played. Anybody reading this needs to definitely check out God Equals Genocide. 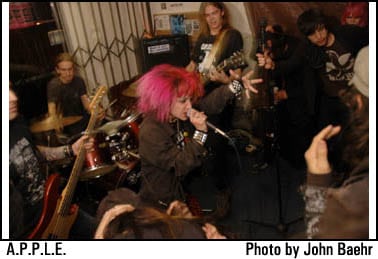 Next up were A.D.S. and Parity. I’m sure they were both great, but a pizza place down the street was calling my name, so I had to miss out on both bands. I came right as A.P.P.L.E. began setting up. They were missing their original drummer and bassist so they found replacements they taught about twelve or thirteen songs to the day before the show. The room was filled with energy the instant they began to play. Once they played their classic “Peace Is Possible,” everyone was moving, singing along, spilling beers, and laughing. All of their songs have positive messages that put a good vibe throughout the room. Towards the end of their set, they played a rendition of Bob Dylan’s “Blowing in the Wind” which, in my opinion, is one of the best punk covers ever. It definitely put everyone in a positive and caring mood. After they finished, lead singer, Jae, stayed around to talk with people hanging out in the room. I spoke to her for good twenty minutes and have to say she’s one of the nicest people I’ve ever met. She really respects the whole scene and the DIY attitude.

Overall, the show was a fun and uplifting experience. If A.P.P.L.E. ventures back to Southern California, you should definitely go see them.