I know I’ve mentioned ABC No Rio attempting to raise money in hopes of being able to buy the building from the city and renovate it. So, apparently, they’ve become successful and decided to celebrate by having a hell of a reunion show, because reunion shows during the summer in New York City are all the rage (looking back to the number of reunions at CBGB’s fundraising marathon last summer, as well as some other notable rumors that have come up for this summer [Dick Army, I’m looking in your direction]).

When I walked in, I was surprised; granted the show room has looked different every time I’ve been there, but today the bands were not only playing on the opposite side of the room than usual, but a small stage had been set up as well. At first I thought it was a little unnecessary, considering how small it is, but I decided I liked, it, and that it gave it a little more of a Gilman Street feel to it (by which I’m going purely by what I’ve seen in magazines/tapes, since I’m too lame to have ever actually been there myself). The first band (and only non-reunion) was GoApeShit. I wasn’t familiar with them, but they were good, fairly straight-up hardcore, with some metal and grind core/power violence to them. I was reminded of Allergic To Bullshit, but that may have been mostly because of their names. All in all, they gave me the impression that they were simply a bunch of friends who’d recently decided “Dude, screw this. Let’s just start a band,” which is always awesome.

Now, I was totally psyched to see Bugout Society. I’ve seen pictures and videos and read reviews/stories of “back in the day ABC” bands like Animal Crackers and The Manacled. Compared to so many bands that insist on taking themselves 110% seriously, I couldn’t wait to see the band that had a reputation for starting food fights in the middle of their sets. Introducing themselves with “YO!” (which was also repeated many, many times during their set), they opened up with “Hard Rock Café,” playing a fair selection from their catalog (though, sadly, no “Don’t Piss on My Barbecue”) and cracking everyone up in between, be it with ridiculous dancing or taunting. Things picked up even more halfway through with “Castle Carnage,” prompting an infamous battle with a certain very cheap brand of fast food burgers, which pretty much lasted the rest of the set. The whole thing literally greased the floor up enough for MC Charlie Boswell to run to the back of the room and slide back to the stage, for a truly triumphant finish. 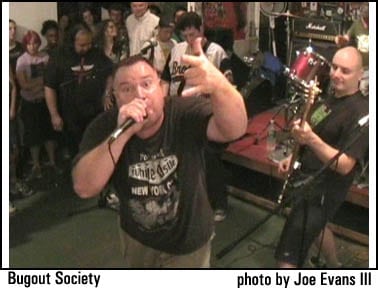 Finishing up the afternoon/evening was a reunion of early ABC No Rio house band GO!, apparently prompted to reunite in honor of celebrating ABC’s acquisition of the building, as well as a fairly recent remembrance piece in the Jersey Beat zine. I wasn’t as familiar with any of their records as much as Bugout Society, but it was pretty much what I expected from an early generation hardcore band; incredibly short, speedy songs, many addressing various political/social issues, and some that were just down right silly (i.e. “MILK!”) My only real complaint was, that since that was probably the only time I’ll see them, that they fit more songs into their set instead of banter. 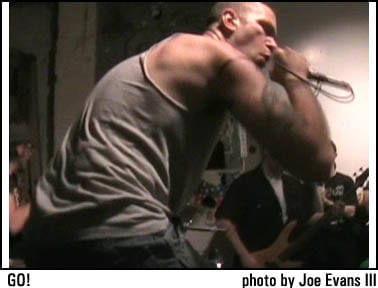 All in all, I was pretty happy to get somewhat of a glimpse of what was going on amongst the New York City punk and hardcore scene when I was roughly eight years old.