I wrote another brief show review recently, and at the beginning I noted that sometimes I really have good luck. The above-mentioned show points to yet another one of those times.

As I noted in the other review, I had to go to Sweden earlier this month for work, and had decided that I’d better take some vacation afterwards to poke around. After a little over a week’s worth of work, I stayed in Sweden for another six days, and then I hopped on a train and headed over to Copenhagen, Denmark. As with my vacation in Sweden, I didn’t do very much planning ahead of time in terms of what I wanted to do and see in Denmark, but I did do some searching online to see if any Danish bands that I like (not that I know very many to like!) might be playing while I was there. Priorities! I also looked up some record stores and stuff like that. Sadly, I didn’t find very much in the way of shows, but I did track down this record store, Repo Man Records in Nørrebro (suburb of Copenhagen), that I thought I might need to pay a visit to.

After spending what seemed like an inordinate amount of time trying to figure out the transport system (metro trains and S trains and so forth) in Copenhagen (Stockholm was just so straightforward!), I finally managed to get myself over to Nørrebro, and had a stroll over to the record store. There were two guys working, no customers aside from myself, and lots of lovely records. After a short while flipping through the bins, I asked one of the guys if he could recommend a good compilation that featured a bunch of different Danish punk bands. From there we got to talking, and I learned that he (Tommas, the owner of the store) was the drummer for Gorilla Angreb (when they were still around), one of the few Danish bands I know (and like a lot!). Excellent!

He and the other guy working there, Lasse (who is the bassist for Hjertestop), gave me some good suggestions of records to check out and played me songs by different bands. They were, overall, quite friendly and helpful. Tommas asked if Parkside is still around in San Francisco and I assured him that it is and that they often have fun shows. I told them that I’d had some trouble tracking down shows in Copenhagen (Unfortunately, I would be missing the K-town festival, as it began the day I was leaving) and asked them if they knew of any good ones happening over the next couple of days. Well, lucky me, there was a free record release (for De Høje Hæle, one of the bands that were on my list of records to seek out) show at a place called “Bolschefabrikken” starting in about half an hour and Tommas was happy to give me a ride if I wanted to go. 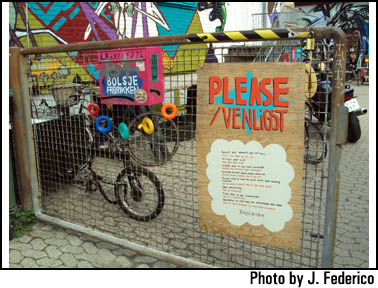 You see what I mean about the luck? If I’d arrived at the record store a half hour later, I would have missed this whole exchange.

So, I spent too much money on records and crammed them into my bag and hopped into Tommas’s car to go over to the show.

The place they were having it looked pretty much like a squat, although I’m not sure if it is, technically, or what. It was big and warehouse-y, with lots of different rooms (some common rooms, some not) and lots of graffiti. Outside there was more graffiti and some pleasant “rules” posted and a shop-looking area where a guy was welding something onto a bicycle and some other areas that I didn’t see too much of. There weren’t tons of people there yet but a fair amount milling around and drinking and smoking.

…do not be deceived. Yes, it is a bottle of beer or a glass of wine for approx US $1.65 each. Fantastic! I know it might be hard to understand for a moment, not only because of the price, but because the “Øl” looks like it might be an abbreviation for something and the “vin” also means “wine” in French (and yet you’re sure you’re in Denmark, right?), but it is true. At least it is when you’re at Bolschefabrikken and the helpful, be-dreadlocked young sprite behind the counter confirms it.

Anyway, shortly after I arrived and got myself an øl, a young guy got up with his guitar and sang two songs and they were, I thought, quite nice. However, it almost seemed like he was maybe just checking the sound system (which was surprisingly not bad in my opinion, considering this was pretty much the equivalent of a house show), because that was it, two songs, not much ado about anything. I’m not sure! 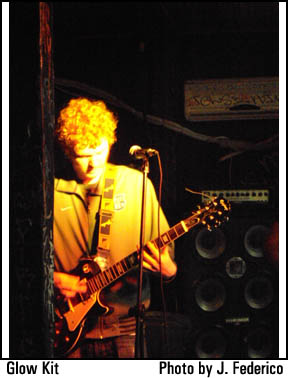 Next up was a band called Glow Kit (http://www.myspace.com/glowkit), and I liked them right off. Their songs had a distinct, energetic bass, were a little poppy and very catchy. They almost reminded me of Clorox Girls a bit at the beginning, but got a little heavier as they wore on. They were simple, straightforward, and fun. I totally liked them.

Following Glow Kit was a band called Even Dwarfs, which seemed like a strange name to me, but may very well come from a Werner Herzog film called Even Dwarfs Started Small. Who knows?! They were made up of just a guitarist/singer and a drummer/singer. The drummer played standing up, with what seemed to be only a tom, a snare, and a cymbal. When the guitarist sang, I couldn’t really hear him and felt like maybe he shouldn’t really bother, or that they should get a separate singer. Yet, when the drummer sang it was a lot louder and clearer and I liked it. The guitar seemed to have piles of effects on it, which sounded cool. The first two songs I’d say sounded a bit melancholic, but then when the drummer started singing, it became different and lost the melancholic edge. The last song they did was a cover of “I Wanna Be Your Dog.” I liked them!

The next band was called Undergang (http://www.myspace.com/undergang666) and they had quite a few fans (it was starting to get crowded) but they were pretty death metal (which is not my thing) and I took the opportunity to go find an ATM down the street.

When I got back, they were still playing so I stayed outside and had a chat with a nice guy from Australia and a nice guy from Spain. It was drizzling on and off, which was unfortunate. My canvas sneakers had begun to get wet and it was starting to soak through my socks to my feet.

The next band up was called Moonless (http://www.myspace.com/moonlessdk), and Tommas plays drums for them (He informed me that their bassist used to play for No Hope For The Kids). They were apparently not supposed to play, but all band members were at the show so somebody asked them to. They decided to go ahead. I am quite partial to the name Moonless for a band. They were not really my thing, having a sound pretty Black Sabbath-influenced, and reminding me a bit of Wooly Mammoth or maybe The Sword or something, but they seemed to be tight and the singer had a good voice. This guy I spoke with briefly outside later—who is apparently really into that sound—was raving about them, so if that’s your cup of tea, you could give them a listen: http://www.myspace.com/moonlessdk 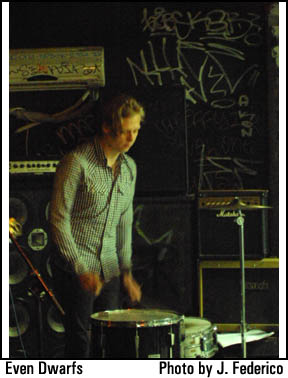 Unfortunately, during Moonless I was starting to wind down a little. I’d had a few beers, I was getting hungry, my feet were wet, I had already been there for at least four hours, and De Høje Hæle, who I actually really wanted to check out (as well as Hjertestop) were scheduled to play last, at around 11:30 PM. That was still five hours away! I tried to hang in. I went back inside, but I wasn’t into the band that played after Moonless (Although of all the bands that had played so far, it was the first with any female band member. I hoped there were more to come!). Plus, seriously, the smoke was out of control. There didn’t seem to be any windows in the (small) room where the bands were playing, and since it had begun to rain intermittently, all the people who’d been smoking outside (in addition to all the people who were already smoking inside—which, by the way, was a lot!) had come in. I am a smoker (sometimes?), but this was way, way too much. I don’t know how anyone could stand it, seriously. I guess that, living in a place that has tons of smoking restrictions, I have become (luckily!) un-used to it, and it totally influenced my decision to split.

I might have stayed longer if I’d had some friends there, or if I’d arrived later. I thought about leaving to go get some food and then returning, but the prospect of returning to a crowded, smoke-filled room and potentially sitting through some more bands that I wasn’t super into was not actually terribly appealing. The people I’d met were nice, I was excited that I’d been able to check out at least part of the show, and seen a few bands that I liked, but I didn’t really know that I’d last another six hours. I admitted defeat and began heading back towards the S-station, with only mild regret. I hope there will be an opportunity for me to see De Høje Hæle another time. Who knows, maybe they’ll show up at Thee Parkside!

P.S. After returning home to the States, I listened to the De Høje Hæle record (Skal Vi Aldrig Videre?) and became totally bummed that I didn’t stay to see them. Argh! It is great. Check it out! http://www.myspace.com/dehjehle I am totally in love with the song “Avantgarde Symfoni,” which, unfortunately, is not available to listen to on their myspace page, but you can find it on the worldwide web if you look and you can order the record here: http://hjernespind.com/index.php if you can’t dig it up at your local record store.

P.P.S. Other lovely records I picked up at Repo Man:

When Lasse and Tommas recommended this to me, I think it was Lasse who said it sounds like a cross between NickCave and Tom Waits, and I thought that was a fair statement. To me Rasmus sounds quite a lot like NickCave. So you can add that to what Todd described in the link above. I really like it.

Got a few more records but haven’t yet had the opportunity to give them a proper listen. Looking forward to it, though!