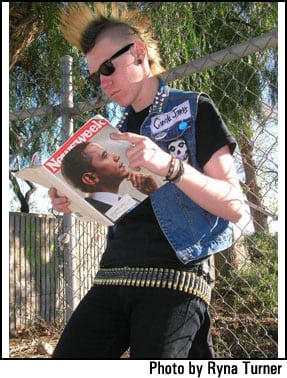 Give Change a Chance: Punklightenment 7

It was incredible. The presidential inauguration of Barack Obama, the 44th and first African American president of The United States, was so awe-inspiring that it seemed like a dream. I still feel a strong sense of amazement when I see President Obama on television or when I read about him in the news. I had grown so accustomed to the internal cringe and the conscious decision to turn away in disgust whenever I saw G.W. Bush and Dick Cheney during the past eight years that the readjustment to a new dawning of American politics is taking a considerable amount of energy to reformat my personal consciousness. It wasn’t just that I was elated to see the Bush-Cheney fascist-leaning co-presidency come to an end, but to see how far our nation had come from its inception was simply mind-boggling. I wish my Latino grandparents who died early last year had lived to see it. They were both rooting for Obama. A definite and much-needed change had come our way, but there are some who still reflexively and ignorantly reject the idea that a revolution of sort has taken place.

Our nation has gone from enslavement of the black race to elevating a black man to the highest position in the land. If that isn’t change then I don’t know what is. When I was taking an ethnic studies class in 1994 at Berkeley, Professor Robert Allen, a former member of The Black Panther Party, taught us that The United States was founded by wealthy white men, has been under the control of wealthy white men, and will always be under the control of wealthy white men. For the most part, Professor Allen was right, because despite all the civil rights advancements that have taken place over the years, it has always been wealthy, white men in the highest levels of office. There have only been four black senators since the Civil War reconstruction and, up until now, the notion of a black president was outrageous. I wonder what Allen thinks today.

This country, love it as much as I do, has always had a Jekyll and Hyde persona. It was built largely on the genocide of the Native American and the enslavement of Africans, but it also created the written guideline known as The Constitution that—despite all previous attempts to circumvent and/or strip away its legal mandates and protections—still stands and provides the means by which “We the people” can constantly renew and improve American society. Thomas Jefferson said, “Every generation needs its own revolution,” and this recent presidential election is precisely that.

Of course, the extreme right wing is going to bitch and complain about anything and everything our new president tries to accomplish. One thing the Bush-Cheney reign taught me was that there are always people who will reflexively accept anything the leaders of their party do or say, while also impulsively rejecting anything that comes from any other source. It gives us insight into how people like Hitler and Mussolini, and so many other horrible tyrants came to power, and also how so many citizens—essentially no different than you and I—could get behind things like torture, genocide, and preemptive war. Mindless loyalty leads to catastrophe. Unquestioning faith is sure a lot easier than gathering information, assessing it in a critical fashion, and making an intelligent decision. That’s why so many people turn their minds over to things like politicians or religious figures who tell them what to think. It must be a relief not to have to put mental effort into life. Such unthinking adherence and loyalty is not only a right wing trait. Left wing extremists also exist. I met plenty of them while in college and I still encounter them from time to time. I am sure that if BarackObama said to walk off a cliff, a lot of people would do it. That is simply the power and danger of the cult of charisma.

I first became interested in politics due to my discovery of punk rock somewhere around 1978. The music of Black Flag, Dead Kennedys, and many other bands of the same ilk permeated my young, impressionable mind and my social angst began to extend itself beyond contempt for the gang bangers and stupid stoners at my high school. I had a new target: the government. Fuck the government, fuck those assholes at my school. All I wanted to do was skateboard, go to gigs, and hang out with people like me. JimmyCarter was president then but I did not pay too much attention to what was really going on until the failed attempt in 1979 to rescue the hostages in Iran. Operation Eagle Claw was supposed to bring our people home, but, instead, a sandstorm caused the crash of the rescue helicopters and the deaths of eight American servicemen. I wondered why the Iranian students took our citizens hostage and soon learned it was because of the U.S. support of the brutal Shah of Iran, MohammedRezaPahlavi, whose tyranny and violence against his own people eventually led to his overthrow.

RonaldReagan became the next president, but I already thought he was a monster because when he was governor of California, he had the students at U.C.Berkeley gassed and beaten during the Free Speech movement during the mid-1960s. After a few years of the Reagan administration, I remember thinking that “The Great Communicator” seemed “out of it,” somewhat confused, (presumably due to the onset of Alzheimer’s disease) and knowing that he had previously been an actor, it appeared to me that our government was nothing more than a lying puppet show. I was an angry and alienated teenager who had relatively recently discovered vertical skateboarding and punk rock, which were excellent venues for channeling all that energy, but I had yet to develop. Still young and naïve, I had already fallen into the trap of automatically accepting my chosen (punk rock) leaders’ views and actions while perceiving the entire governmental system as my enemy and everything it did as oppressive and/or destructive.

This seems to be a phase that many punk rock fans go through. Over time, most of us grow, mature, and learn to see things in a more mindful and accurate way. After some time, most of us begin to realize that nobody is all good or all bad and the government is a creation of our own collective design. We begin to see that the government may be oppressing and killing innocents in other nations while simultaneously coming to the rescue of many others. It is obvious that our system is far from perfect but it provides us with things like public schools, roads and bridges, clean drinking water, and police and fire protection. Today, I often laugh at extremists on both sides. I tell the Rush Limbaugh fans and die-hard Bush supporters that if they hate socialism so much, then take their kids out of school, dig your own water wells, and never call the police or fire department ever again, because those are socialist programs. I say the same thing to the extreme left wing fanatics who unthinkingly reject everything the government says and does. For example, the controversial Rap group Dead Prez recently released a statement that says, [BarackObama] is as much a white supremacist as GeorgeBush…” What a ludicrously asinine and hilarious statement. Listening to ignorant reactionaries is just like listening to a punk kid bark out a song about how much he hates his parents while playing the guitar they bought for him. Despite all the negatives, we are all very fortunate to live in the United States.

When Barack Obama put his hand on Abraham Lincoln’s bible to take the oath of office, it was incredibly significant. The Great Emancipator could never have imagined this day. Only a year ago, I was asking my young tutoring students if they ever thought this country would elect a black person to the presidency. Almost all of them said “no” and I agreed with them. The only ones who said “yes” were the youngest (kids in first and second grade). Sometimes innocence and naiveté hit the nail right on the head. As I sit here in the middle of the night at my little tutoring center business, I can see that far too many clients have dropped out of the program due to the current recession. Every day, more and more people lose their jobs and giant corporations continue to tank. Will I survive? Tomorrow is a new day, and I will once again commit myself to the task of getting people in here so we can help them succeed. The future looks uncertain, but I share in the renewed energy and hope that must prevail. Failure is not an option. Finally, after so many years, we now have an honest president and we have successfully subverted the dominant paradigm. Today, there is only one choice: we must give change a chance.

*Write to Marcus at: [email protected]