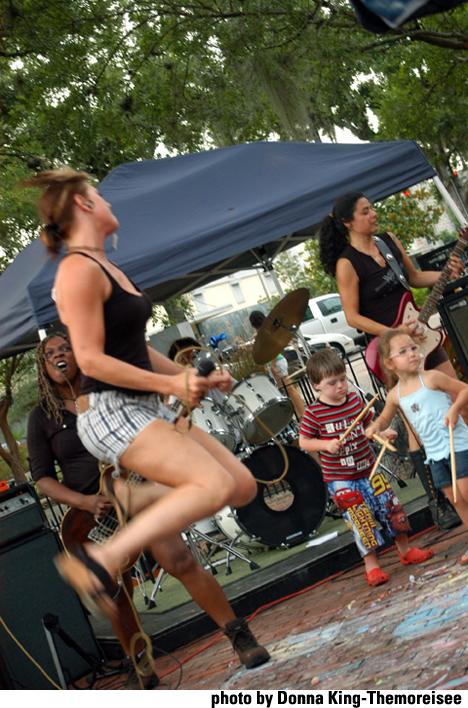 “Isn’t it cool the way this tangerine comes apart in slices?” That was a question Tate Clair posed to me in 1991 after I was first introduced to him driving back from a skate park in Daytona Beach with our mutual friend, Chuck from Hell. Tate has always possessed that endearing quality of seeing the world through a child’s eyes so it came as no surprise to me that he would wind up opening a punk sandwich shop / snack bar in GainesvilleFlorida in 2009 while also singing in bands such as The Ruins and years earlier in bands like Sick Dick And The Volkswagens.

When Michelle Parker recently approached Tate about having a benefit for Gainesville’s first Rock Camp for Girls, naturally Tate offered to open Lunchbox on Sunday even though it’s usually closed on the weekends.

The camp headed up by Jennifer Vito and Chelsea Carnes runs August 5 through August 10 in Gainesville for girls ages eight to seventeen years old.

Chelsea was inspired to bring the camp to Gainesville after volunteering at the Jacksonville, Florida Girls Rock Camp last year. The camp will use music and performance to help foster self-esteem, community and creative expression. There will be workshop leaders, counselors, specific instrument instructors, a videographer, sound people, and additional helpers all of whom are female. One hundred girls will be participating in the camp.

The Lunchbox chipped in for the upcoming camp and donated one dollar from each draft beer that was sold. There were also raffle prizes such as Driver CD’s donated by the band and T- shirts from some of the other bands that performed. Proceeds from the sale of donated vinyl went toward the camp as well.

Those who came out to support the benefit were treated to live performances from bands that included Seed Memory, Julie Karr, The Ones To Blame, Waylon Thornton And The Heavy Hands, and Driver.

The musical sounds ranged from acoustic guitar solos with Julie Karr to country rock and sass from The Ones to Blame. The all female band, The Ones to Blame includes Emma on guitar along with Jenarchy on drums, the Jennifer who is organizing the Rock Camp for Girls, Jackie on bass, and Su who plays mandolin. They all sing and the crowd happily took the band’s cue and sang along with them during their forty minute set.

Jennifer Vito is also in the two-piece band, Seed Memory with her boyfriend, Sterling Stokes. They describe themselves as new indie post-rawk and rock they did!
Waylon Thornton and the Heavy Hands is a two-piece band that packs a punch with Waylon on guitar and his wife Meg pounding away on the drums. They formed in 2007 and have a hard and heavy sound with twinges of country. Link Wray’s influence can be heard along with bands such as the Cramps, Black flag, and the Germs. Waylon was literally all over the place during their set. He walked into the crowd continuously playing his guitar, which really amped up the audience! The band drives a 1970s white hearse that in my view competes with the Jodie Foster’s Army school bus back in the day for coolest band vehicle.

Driver played last but we were all anticipating an amazing set from this group of veteran musicians who did not let us down! They are a rock, punk, and sludge band with former members of the Mutley Chix such as English Seck on bass and Naheed Mojadidi on guitar along Dave Peck on drums. During Driver’s set they announced that all the kids should join them for their last two songs. Most of the kids were preteens who felt shy and will gain a lot of confidence from the camp. Some of the girls there will be going to the camp and I know for sure that they will be more apt to run onto the stage after they finish the week long session at the Rock Camp for Girls.

Two youngsters showed no inhibitions, one of whom was given a set of drumsticks from Dave while the other, Aiden, took over the microphone but not before local rock goddess, Deb Fetzer, who also used to play with the Mutley Chix came up and lashed out the Bad Brains song, “The Regulator” HR style, fast and furiously!
Mostly everybody in attendance feels strongly about empowering girls, giving back to the city they call home and rocking until they are rocking in their chairs.
Cheers to everyone who made the event a success and day to remember. The rock camp will surely have a positive impact for the girls in the community.

More information can be found at girlsrockcampgainesville.com
The camp costs one hundred dollars, but there’s a sliding scale for those who find the camp cost prohibitive.  Lunch is included and comes served with performers for a daily rock and chat session.