I have tried to see Les Hormones about three times now, and each time something has foiled me. On Wednesday afternoon my friend was coming in from DC and I thought the show would be a nice way to introduce him to San Francisco. Little did I know I would be foiled again!

We first went to Argus Lounge and had a drink, then headed over to the Knockout (http://www.theknockoutsf.com/). Even with stopping on the way (for some of the worst guacamole I have ever had), we still (apparently) arrived a little early and the first band was still setting up. When, oh when, will all the stars align and the planets come together and all that mystic shit to make shows start either: a) on time, or b) early (not before it’s supposed to, just early from the get go) during the week? I’ll still go, okay. I think that’s been established, but I honestly see nothing wrong with starting a show at 8 PM Monday-Thursday. Really. Not a thing wrong with it. 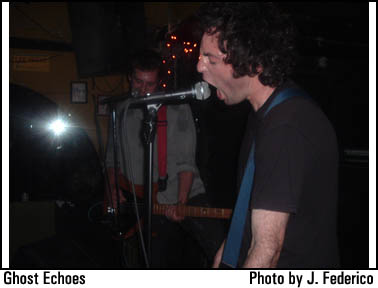 Anyway. I’d never heard Ghost Echoes (www.myspace.com/ghostechoes01) (from San Francisco) before and I liked them. They seemed to me a little all over the place. The first song had some major Sonic Youth guitar feedback thing going on. The second song sounded to me like pure Black Flag. The bassist sometimes played his bass like a guitar (the way he strummed), and sometimes he didn’t. When he sang, there were often major effects on his voice, reminding me of The Cure’s, “A Forest” or something. Later, he sang without all the effects and I liked that better.

The guitarist / singer was sometimes quite screamy / angry, but other times he was a bit easier to understand (although that could also have been due to where I was standing in the club). At one point, I thought he sounded kind of like Guy Picciotto (Rites Of Spring, Fugazi), only with more balls. It seemed like his guitar was tuned kinda funny, but in a good way. Really liked his style.

One of the songs I particularly loved sounded like a warped airplane coming in for a landing. They also had some more sludgy stuff going on that made me think of the Melvins or Killdozer. (By the way, did anyone go to the Turks / Hank IV/ Killdozer show at Bottom of the Hill awhile back? It ruled!) Overall, I thought they were interesting and I liked them.

The Outdoorsmen (www.myspace.com/theoutdoorsmenmusic and http://www.wildamericanrecords.com/) (also from San Francisco) were up next. They were straight-up garage. They didn’t blow me away with their originality, but I liked them fine. They were fun.

They’re a three piece, with the guitarist taking care of the vocal duties. The drummer had a pretty sweet and light touch; I thought he was the extra flakey croissant of drummers. It was funny because he had almost the same exact set up as the drummer from Ghost Echoes (plus a high hat), but they both sounded so different. I love that!

The singer / guitarist’s guitar seemed extra small, but I think that’s because the guy in Ghost Echoes had this nice fat Rickenbacker and, by comparison, it just seemed that way. He had a nice voice; reminded me of the guy from the Starvations sometimes—very natural and well suited for the style of their music. I really liked a song that they played after one about blow jobs—might have been called “I’m a Goner.” They may have done some Smugglers covers, but I only mention this because I heard chatter about it, not because I’m familiar with the Smugglers myself (although, clearly, now I will have to see what’s up with them).

I liked when they ventured into darker territory the most. There were some guitar solos which were not bad, fitting for the tunes, but that didn’t really get my blood going (not many guitar solos do, though). They had a couple of false starts but, overall, they were a fun, dance-y band.

Les Hormones (www.myspace.com/leshormones) were up last. By this time, my friend, rather drunk and working on East Coast time, was fading pretty fast (although I was also kinda tired, I’ll blame this one on him). I think because I keep trying to see Les Hormones I have quite high expectations for them, yet the first song / song-and-a-half didn’t provide the excitement needed to reenergize us and keep us there for the whole set. I can’t say that as a reflection of them as a whole—they may have just been getting warmed up, and, as I said, we were both pretty tired. However, we only managed to stick around for about two songs, and then decided to call it a night.

Looking forward to Les Hormones Round 4!

PIZAZZ, THE: Get out of My Kitchen: Cassette