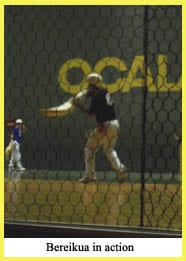 Get Yer Yellin' Shoes on: It's Jai-Alai Time!

In my opinion, professional sports have gotten too overwhelming. These days it seems that it's all about sponsors and egos and endless posturing. A few months ago, though, I was introduced to jai-alai and found a professional sport that I can believe in. A sport that is about everything sports should be about: gambling, danger, emotion, hand-eye coordination, and yelling.

So what exactly is jai-alai (pronounced hi-lie)? It's a sport that originated in the Basque country (an area in the western Pyrenees between France and Spain). In the Basque language, it is translated as "merry festival." That means it's a sport of joy.

The players wear brightly colored jerseys, rubber-soled shoes, white pants with a red sash, and a white helmet. They wear a leather glove on their right hand that is attached to a long, curved wicker basket called a cesta. The cestas are custom made to meet each player's specifications. They use the cestas to catch and hurl the pelota.

The pelota is the deadliest ball in all of sports. The center of the ball is made of a special Brazilian rubber, then covered with a layer of nylon thread. The final two layers are composed of a specially hardened goat skin.

Jai-alai can be played either as singles with two players, or doubles with four. One team serves the pelota against the far wall, which is made of granite. The other team has to catch it and hurl it back at the wall before it bounces a second time. Every time someone misses, the next team comes in and a point is scored. After all eight teams have been through once, points double. The goal is to get up to seven points first. Sounds simple enough, right? Kind of like racquet ball maybe? No, not at all. The pelota is much more lethal than a racquet ball, or any ball that isn't on fire. It's 3/4 the size of a baseball, harder than a golf ball, and travels at speeds exceeding a hundred and fifty miles per hour. So if it hits you during play, you're fucked.

Then there's the gambling element. It's along the same lines as betting on the ponies. You can bet on a player to show (come in first, second or third). You can bet a quinella (pick a few players and hope that two of them come in first and second). Or there's the most profitable and risky bet - the trifecta. That is where you choose who will come in first, second, and third, and you don't win anything unless you're exactly right. Watching jai-alai is a hundred time more fun if you place bets. Even if you only bet three dollars. You feel as though you have something invested in the game. Also, it makes the yelling and screaming that inevitably takes place a bit more rational. 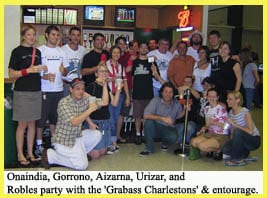 Yelling is a crucial part of the jai-alai experience. A mesh screen is all that separates the fans from the players and they can hear pretty much everything that people shout at them. Because of that, there are a lot of interesting comments that you'll hear, particularly coming from the fans of the redneck persuasion. You'll hear them shout things like, "Your mom's a lesbian!" or, "C'mon Todd, fuck'em up!" or, "You get an E for effort, but that's all you get!" Somehow people always end up sitting behind us. When my friends and I go, we try to shout only encouragement, but when a player loses a point and you lose your last six bucks, some profanities are bound to slip out. Also, the kids from Gainesville have started shouting, "Ey!" every time a player bounces the ball in preparation to serve, then when they do serve we all shout, "A-ooooh!" Sometimes the players mess with us and pretend like they are going to bounce the ball just to see who screams.

So, I got curious about what sort of person gets into playing jai-alai professionally. To further my quest for knowledge, I skipped work one Friday night and drove out to Ocala jai-alai to talk to some players. Seven of them were gracious enough to sit down and answer a few of my questions about their own experiences with jai-alai. They all play under a one word name, which is most commonly their first or last name. Here is a quick overview of the guys that I talked to and how they became involved in the greatest sport on Earth.

Onaindia is a thiry-year-old who began playing when he was eight years old. He went pro in Spain at the age of eighteen, before being offered a contract in Orlando.

Laurent is a twenty-three-year-old Frenchman who started at the age of eight. He turned pro two years ago and has played in Daytona, FL as well as Ocala. 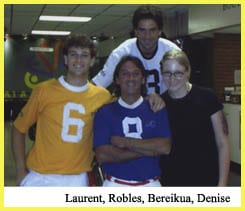 Solaun II has been immersed in the world of jai-alai since the age of five, with a father who had a twenty-seven year career in the sport. Though 2003 is this twenty-one-year-old's rookie season as a professial player, he has the knowledge of a veteran, having started his jai-alai career long ago as a ball boy.

Robles is thirty-five. He turned pro at sixteen in Spain, before coming to West Palm Beach, FL at seventeen, since the U.S. is where the money's at in jai-alai. He's a big rock fan and listens to bands like AC/DC, Def Leppard, and Metallica.

Bereikua had played for five years before going pro at nineteen. He played for four years in the Basque country before coming to the states. If anything can prepare this twenty-eight-year-old for a game, it's laughter and listening to music from the 1950's and Aerosmith.

Todd's professional career began three years ago in Ocala when he was twenty-one. His twin brother plays pro in Rhode Island. To get pumped for a game, Todd likes to listen to Eminem on his headphones.

Gino got into jai-alai thanks to his parents, who would bring him to watch as a child. He went pro six years ago at the age of twenty-three in Orlando. Though he doesn't listen to music while he's getting ready to play, he is really into southern rock, like ZZ Top and Skynard.

One of the things that pleasantly surprised me during these talks was that everyone was very friendly and down to earth. They were, by far, the nicest group of professional athletes that I have ever met, and each made apparent their voracious love for the sport of jai-alai. 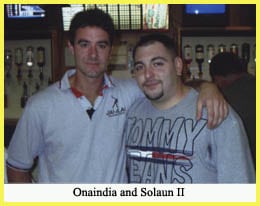 Watching the players give a hundred percent to each point is one of the most exciting things about this sport. Everything happens so fast - they're diving to make a catch and just as fast they've whipped the pelota out of their cesta, they're back on their feet ready for whatever happens next. With all of this action six days a week, it appears as though jai-alai would be extremely hard on the body.

The guys explained to me that common injuries include those to the elbow, knee and shoulder, as well as the rotator cuff on the right arm; not to mention injuries inflicted when they are hit by the ball. Todd has been hit three times in practice. In one instance, messing his nose up pretty bad, though not breaking it. Gino, on the other hand, has fractured a vertebrae, broken his collarbone, and received eight stitches above the eye as the result of collisions with the deadly pelota.

Another thing that I talked to them about was the yelling and heckling. The consensus was that yelling is always good. They are usually able to sufficiently block out the negative comments. More yelling means more people have shown up to watch. Playing in front of a big, loud crowd makes them push themselves harder. They play even better because they're having fun, and they enjoy themselves more if they're playing their best possible game.

And to think that I was first lured into the crazy world of jai-alai fandom by the endorsement of an enthusiastic friend (thanks Replay) and rumors of cheap beer (on Wednesdays it's fifty cents). As soon as I walked into that building, I could tell that I was in store for something amazing. It was evident in the way that my more seasoned friends' eyes glazed over and their mouths began to salivate. What hooked me, though, was the energy, the tradition, and the disbelief that something this cool was going on unbeknownst to the majority of the population. I guess those are some of the same reasons why I first got into punk rock. Unfortunately, professional jai-alai is exclusively an East Coast deal in the United States, with the vast majority of frontons located here in Florida. That is, until the rest of the country gets wise to the fact that it's missing out on the best sport ever and everyone gets a chance to know the joy that jai-alai brings into peoples lives.