Ah! Being one of the old men of the bunch, I get to relive my childhood. GBH and the Circle Jerks in one show! I have to admit, I haven’t seen GBH since 1985 and the Circle Jerks probably since not much later. It’s amazing that after all these years I can still see punk bands from my teen years. It’s also scary that they perform as well now as they did back then.

I got to the show kind of late, due to the early start time being right in the middle of rush hour on a Friday. A fifteen minute drive becomes forty-five minutes of bumper-to-bumper traffic. I entertained myself with a good conversation from my punk rock date, Matt. (My wife has been ill and she has been at my side for the 20+ years when it comes to gigs.) We eventually found cheap parking and made it towards the venue.

The Palace has weird security measures. As I figured, they sweated Matt over a belt that had no studs and also told him that his necklace was not allowed. We had to hike back three blocks to my car so he can remove his contraband. He was finally contraband-free and we caught the last few songs of the Amazombies. I’m guessing that was the band because of what was listed on the most recent advertisement for this gig. I thought they were the Japanese band, Thug Murder. The two women who fronted this band had Asian characteristics to the appearance. Street punk with superior power. The sparse crowd that was present formed the circle of appreciation and danced to their energetic but short set. 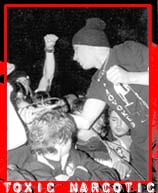 Toxic Narcotic took the stage shortly afterwards and electrified the crowd that was increasingly expanding. I only have one single and maybe some comp tracks by them but their popularity showed. Kids slammed with enthusiasm and the those who crowded up front sang with sheer conviction to every song that they played. I, not that familiar with their material, enjoyed their set that was laced with fierce thrash and vocal energy. The only draw back was the size of the venue was not to their benefit. The acoustics of the room were not tailored to their sound and it came off, at times, like a wall of mud. The crowd did not make the same observation and enjoyed every minute of their set. 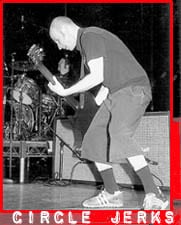 The Circle Jerks were next. I was worried that they were going to be lame. I was wrong big time. They played many songs from the first two records, Group Sex and Wild in the Streets. In fact, they opened the set with “Wild in the Streets” and the crowd went wild. I felt like I was in junior high when they played early hits like “Red Tape” and “World Up My Ass.” Another highlight was when they performed a couple of songs from singer Keith Morris’ former band, Black Flag. I knew that “Wasted” was part of their set list for decades. But when they performed “Nervous Breakdown,” I was stunned. They have a new drummer whose name I can’t recall, but the second generation incarnation of Keith, Greg Hetson (who also plays in Bad Religion and was also an early guitarist of Red Cross) and Zander played to perfection. 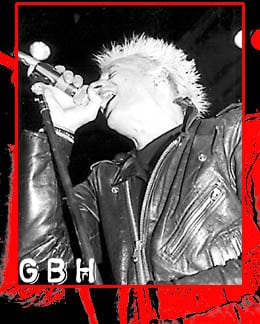 I wasn’t too sure about GBH but wanted to see how they were playing these days. I wasn’t their biggest fan by any stretch. In fifteen years, I only owned the Catch 23 / Hell Hole 7″ as my only release. I only recently, in the last ten years, bought a couple of records, but not the two most current. I am a snob sometimes and will not buy something if I find it popular with people who I don’t find dedicated. They fell into that trap. But I did see them probably two to four times in the early ’80s.

GBH hit the stage and the crowd looked like it had thinned a hair. Those who left missed out in a great show. I was shocked at how well they can still bang out the songs. They definitely showed the physical signs of age but you wouldn’t be able to tell if you closed your eyes. Also, they couldn’t be nicknamed Great Big Haircuts anymore. Sure Colin, the singer, sported spiked hair and the clothes to match, but it sure wasn’t as extreme as in their heyday. I ignored their recent material but felt like I was transported in time when they played their earlier material. Hearing songs like “City Baby’s Revenge,” “Catch 23,” “Alcohol,” and “Give Me Fire” reminded me on why they are so important in punk history. Another thing that caught my attention was the drumming. It was more powerful due to the addition of the drummer playing double bass kick. It took those metallic elements in their music and just carried it farther into the senses. The closer was in tribute to the late Joe Strummer. They played “White Riot” and the crowd continued to show their appreciation to the bitter end of the evening. 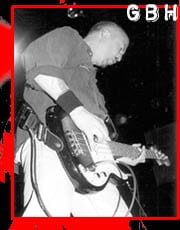 It’s was good to see a couple of old school bands display what made them great. It makes me feel younger in age to the majority of the crowd. As long as punk is relevant, I hope many bands from the past continue to perform their craft even if it might be deemed nostalgic. We need to expose where the current bands of popularity got their wares. I didn’t drink one ounce of alcohol, where I would have in the past, and enjoyed the show with merry cheer.