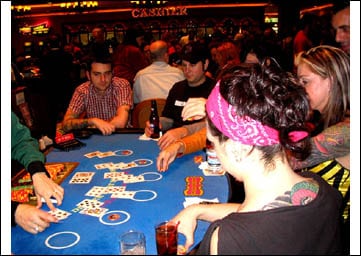 In order to accurately depict this story, I encourage you to sit down with two lukewarm and stale beers that have been sitting in your room for a week and sip them, all while you pretend you're sitting on my lap and I recall the tale of the punk rocker bowling tournament in Las Vegas, America.

Once upon a time, there was a gigantic purple dragon with big old yellow fucking teeth that ate little boys and girls and then shit out candy bars and gummy bears. No wait, let me start over. The dragon is a metaphor for the Gold Coast Casino where the shit had hit the fan over President's Day weekend. And the shit was already being sprayed around the bowling alley in human form, not candy bars or gummy bears.

What the fuck is I talking about, you ask? I don't really know. Just keep reading I'll tell you about this dude that did stuff.

Phuuacken el mehn, it was two months ago and still this ghost hangover creeps up into my skull like it was a haunted house just at the thought of that wonderfully horrible weekend. And if that ain't dumbfuck enough for you, since I suffered from this thing many in the industry refer to as a bender that weekend, I'm the last person who should be telling you the story of what happened. But I am Gabe Rock and I love a good run-on sentence. So let's get started. 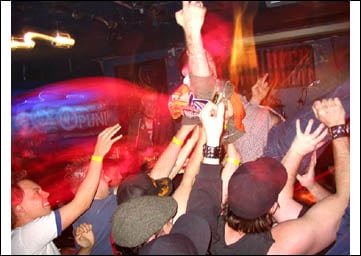 I started out writing this story for the Oakland Tribune but since I got totally shitfaced and lost my ass at the roulette table, I didn't make my plane or my deadline. So here we are.

But it's okay, 'cause I don't really know how to tell a bunch of John Doe normal people why a bunch of punks go bowling. Sure, some network. A lot go to get laid and or see friends and make new ones. But it's also a great place to share a beer with that guy or girl you met at a show years back.

It took me two weeks to recover from the goddamn trip. But since I interviewed like a million people for the Tribune story that never ran, let me tell you what went down right now.

There were more than a thousand punks at the Gold Coast throughout the weekend. When I first arrived, I paced frantically through the casino searching for a beer and a familiar face, 'cause after a two-hour cab ride with a driver on methamphetamines, I needed a hug. 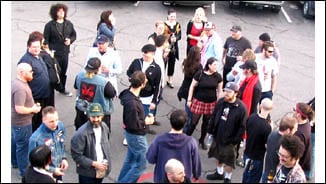 Twenty minutes after I hopped out of the cab, I stumbled across the tail end of a punk show Vena Cava just finished playing only a half a block away from the casino. The human shit fan sprays were all shitty with stupid written all over their faces. Vena Cava had plugged into some power outlets on an abandoned street and played a short set that I was unlucky enough to miss. By the time I got there they were loading up and people were tackling each other and breaking bottles in the streets. I was about as sober as a newborn baby Jesus, so naturally I wanted to kill every drunkass person that threw themselves all over me. Add to that the fact that half of them were popping trucker speed, and you got yourself a rip roaring whatthefuck festival, also known as the 7th Annual Punk Rock Bowling festival.

You could tell the staff at the casino was kind of wondering what the fuck was going on. But I talked to a couple of the casino cops and bartenders and it turns out they get all kinds of freak shows at the Gold Coast every year. From a rockabilly fest to some rodeo belt buckle award thing. One of the casino cops was like, "You guys are a lot better than the cowboys." I figure 'cause it's one thing to get a bunch of punks together with their punk mohawks puking, fucking, and doing heroin all over everything. But cowboys have like stampedes and Wild West shootouts and shit. 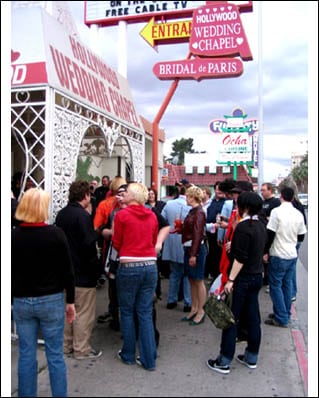 Highlights and regrets owned the weekend. Vena Cava's lead singer April got married in front of about fifty or so obnoxious dr/punks while some plastic Elvis sang them into eternal bliss. The year before that, Frankie Stubbs from Leatherface got married. And five years ago Erik from Dillinger Four got married, too. All at punk rock bowling. So it's like an anniversary at this point, since it's around the same time every year. If you get your ass out next year, just run up to strangers and tell them happy anniversary.

I never got to bowl. But the Tiltwheel douche bags managed to take last place again, continuing their losing streak of forever. But I heard they made a bowling human pyramid and almost got thrown out of the casino. And the Stern boys, the same gents who organize the whole event, took first place. Mostly thanks to some wonder bowler named Sergio, who bares an uncanny resemblance to a punk Jesus man, so you can't fuck with that. 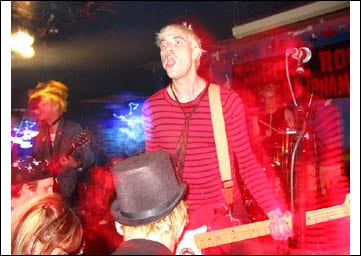 The awards show is always my favorite part. It's like the last hurrah of the weekend: twenty-five-cent beers and some great bands. The Briefs and Manic Hispanic played and both of them almost brought down the house. Luckily, The Briefs made it in there in one piece. On the way to the tournament they escaped fate when their tour van collided with a space ship. It didn't really collide with a space ship, but Chris Brief said the accident could have been a lot worse and they got lucky. So did everyone who got to see them play. They are the kind of high energy band that is so fucking catchy you start singing along even though you don't know the words. And then you look dumb but you don't care because it's funny. Then after the Brief boys played, Manic Hispanic took the stage. This is probably the third time I have seen them and it never gets old. These pinche vatos always make me laugh. And their covers of old punk songs with Mexican twists are always going to be good times. At the show, a bunch of skinheads were about to fight and Manic Hispanic stopped and made sure that before they fought they knew violence was a product of a little dick. I love Mexicans.

The tournament is about as gnarly as it gets, bra. Not only is everyone on vacation, but all the bands, labels, and everything in between get to kick back and abide like the mothafuckin' dude, or the duderino if you're not into that whole brevity thing.

And even if the Stern BYO brothers fix the tournament, nobody really gives a shit 'cause everybody comes out en masse to get shitfaced and spend money they probably can't afford to lose. And they have so much fun doing it that by Monday morning when they are battling their serotonin-deprived brains and the quiet lights of their lonesome homes that separate them from the old and new friends who were in Vegas, mean they can look in the mirror and tell themselves that it was almost worth the shitty tattoo or over-drafted bank account. And I'm sure the rash on your genitals will go away with a little ointment and that special person won't tell anyone that you cry during sex.

Those romantic neon sparkling lights that sent you into seizures of spending hypnotized you into betting that last time or having that last beer. But it was worth it. You went down swinging.

Besides, when or where else are you going to get the opportunity to forget an entire weekend in the presence of people you might only get to see once a year?

Worst advice I can give you is to always bet on black, like Wesley Snipes, and the best is to get the following Monday off of work. See you next year, fuckface. 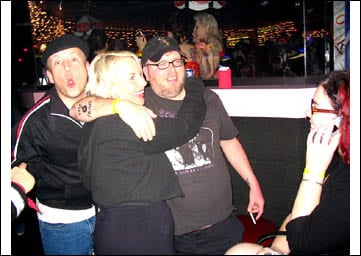