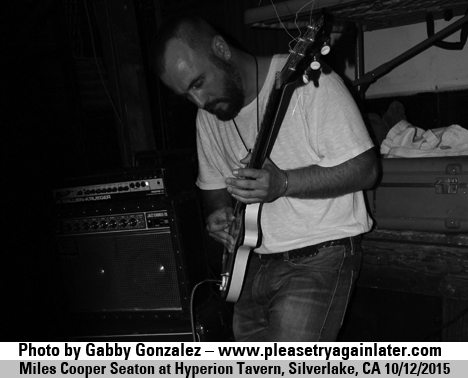 I was thirsty for new blood. It was one of those nights where I went to a bar I've never been, my mission was to fill my ears with noise. As I made my way through the tiny bar, I found a seat right in front of the stage and deadlocked eyes with the solo artist.

Miles Cooper Seaton rapidly thumped on his guitar strings as he looked down at his pedals. He swayed slightly to the right then a bit violently to the left in a constrained motion that poured beautiful distortions into different tonalities. I realized he was dancing with his soul trapped inside of him. The sounds coming out of his amp were melodic rocks melting in acid rain. It was the best electric slug of music; so deep I could cry and I didn’t know why. It was everything I ever hoped for from an avant-garde, anarchist perspective in my tiny adult life and it got me hella inspired.

Seaton is a Los Angeles local who has escaped to various parts of the U.S. He spent time in the Seattle hardcore scene as a high school drop out with his band John Q. Fascist, who had a split with The Displacements that was saved from a basement flood years later.http://hesheattle.blogspot.com/2011/03/john-q-fascist-displacements-split-7.html

He went to New York in 2002 and was introduced to a raw and more intuitive way of playing.  There, he co-founded the experimental collective Akron/Family, which has performed around the world and collaborated with Michael Gira, Keiji Haino, William Parker, Hamid Drake, and the Sun Ra Arkestra. Seaton is my savior in punk because the mix of spirituality in his music with his confrontational improvisations—they were perfectly blended in his self expression as a DIY artist. The wrath of what is breathing in the mind of true chaotic grace is something I feel you can only understand through his solo performance. www.milescooperseaton.com.

I also made a playlist of my favorite experimental tracks of his that is for your droning-out pleasure—do or die, because in crust we trust.
https://soundcloud.com/clownpony/sets/miles-cooper-seaton


If you enjoy our weekly photo columns and stories from photographers, consider donating to Razorcake!