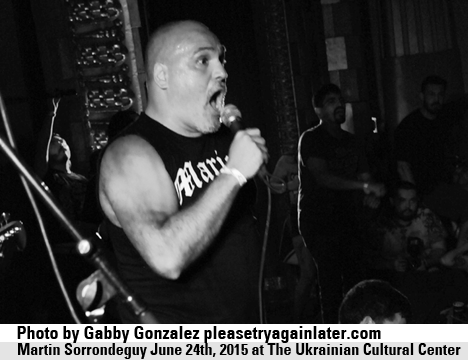 Gabby Gonzalez Photo Column - Los Crudos: I finally got to see them!

My friend Bill General and I arrived at Heliotrope and Melrose a little after 6 PM. The show had already started so we decided to ditch the liquor store and make our way in. As we engaged with the small mosh pit in the center from the last opening band, it began to cycle and turn us all which ways. We made our way to the front left side of the stage. As the punk contingency transfixed on Los Crudos setting up, I took advantage as Bill gave me a lift on to the side of the stage with DSLR in hand before the place got completely packed.

Ten minutes or so later Alice Bag showed up, and after a brief introduction, started spitting mad poetry. It was pure magic; completely unexpected, a moment of clarity for Chicanos and people without a voice of their own. It was the beginning of a live show turned into a revolution.

Immediately after the loud thunder of the drums and a shout out from front man Martin Sorrondeguy: “This song is about something I still don’t like… and that’s how they still treat us.” After a roar in unison from the audience the real pit began. I had never been so happy to be on a stage taking photos during this pit because it was the craziest mosh I’ve ever seen and thought possible. I’ve been dragged out of many punk shows at local venues in the past, such as Los Globos and The Glass House. It was because I thought I was big and bad enough to hang. So yeah, seeing a friendly massive mosh pit was very out of the ordinary for my Los Angeles lifestyle, yet it was like I had been reborn somehow and no longer had that inner fear of getting sent to a hospital again because I danced in the pit.

Anyways, with that, Martin did an exquisite job of bringing up topics he was passionate about in between songs, such as keeping people safe at punk shows and respecting women in the pit. It was phenomenal. The crowd was ecstatic to no limit. The last song they played was “Asesinos,” and that was the cherry on the freaking cake. Everyone in the crowd—Hispanics, White, Black, Asian, and many other ethnicities, went completely nuts. It was like a sea of flying fish, and for a second there I thought the pit was going to take over the somewhat small stage. I wanted to hug every single person at the show that day. There was a sense of love for humanity in the air and it was contagious. It was the best show I have ever been to. They played every single song and they sounded just like their records.

My advice for those of you who deep down inside fear going to punk shows because of the chance of total unnecessary violence and/or trauma (like me), go to a Los Crudos show and support their record label (Lengua Armada Records). You’ll be glad you did.