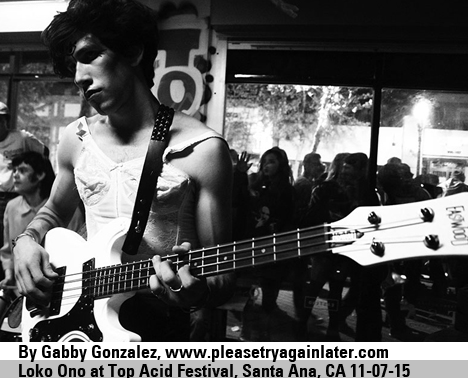 I was stoked to be meeting up with my long time homies Loko Ono. We ran into each other by an alley and toasted one another. Several high fives and peace signs later, I followed them to a venue on the side streets where I could smoke inside. It was warm in the venue and all the local punks huddled about in small circles as if pre-moshing was a thing.

Loko Ono frontlady Kathleen began shredding and howling as every member of the band created clouds of shred in their sound check, feeding the crowd in their anticipation for the pit in action. “Do you wanna hear my Dad voice?” Kathleen asked over the mic. Someone replied, “Fuck yeah!” Another member of the audience asked, “Holy shit! Is this gonna be rock and roll?!” Kathleen replied, “Pinches cabrones!” and the moshing was enticed. Drummer Jason Adams killed it steadily with Vyvyan and Eddie swerving to the tempo and dancing with the beat as if in a jungle dodging unstoppable daggers and darts. Kathleen, with her mad-powerful vocals, was perfectly in synch with their performance. The pit was a whirlpool in full effect, and there was no mercy shown.

Loko Ono is most certainly the real deal forever. After every song, my love for this band and their style grew deep and made a serious gash through my heart. I’ve known Kathleen and Jason Adams since they were tots and it really has inspired me to reconnect with them through their rigorous acts in random L.A. shows. I’m so very proud to claim that we are from the same hood because this is seriously one of the best live bands out right now, period. Representing Santa Maria, I hope that they will empower others to not forget the hometown, barrio, or neighborhood they are from and the awesome community that helped shape who they are today.

Loko Ono will be coming out with a split tape oh so very soon with L.A. locals Sloppy Jane, so look out for that. In the meantime you can check out their super rad bandcamp page [http://loko-ono.bandcamp.com] because it’s stocked full for your virgin ears. Also, send Loko Ono snacks. They love snacks.