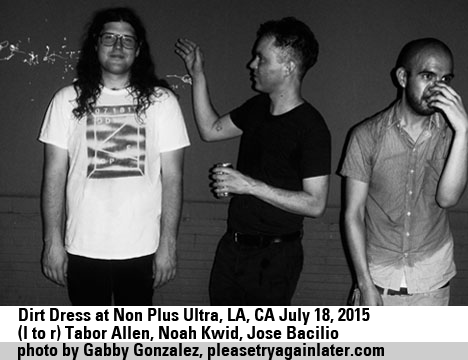 It was Dirt Dress's last show ever. It was time to party hard. Dirt Dress, run by frontman Noah Kwid, is one of the best bands to ever emerge out of Los Angeles. These guys are awesome musicians. Noah is also a killer singer/songwriter. They have a very distinctive twangy folk sound that is lavish with heavy drums and that garage sit-in feel. Noah’s vocals are like no others. It's soft, melodic, and has a boy-like innocence, yet is bold and loud all the way through. Dirt Dress has forever jumpy guitar beats and killer baselines to leave you dancing for days. A “Won’t stop, can’t stop” kind of vibe.

The crowd got rowdy and ready. I stood there with my camera, right in front, and just lost control with the rest of the mosh pit. It was so great to be a part of such a sad day. These guys know how to please a crowd and kick some ass. It went from shredding to passing the bass to friends in other bands. It turned their entire set into a wonderful group effort.

Dirt Dress was not only amazing to see live, they could stop a room and have all eyes on them. They were a band I cried to, laughed to, and moshed to... heck, I met my first love while listening to their tape.

The good news, folks, is that Noah Kwid is not stopping. He’s got a few acts already in the making, including collaborations with Tracy Bryant, and a sick solo project—Kwid—which you can get a first-hand listen to on Mono Records' new compilation Life Is… 2015.

For those of you who have never even heard of Dirt Dress, I recommend you start with the album Perdido en La Suciedad 1 immediately.

No fear? No regrets.