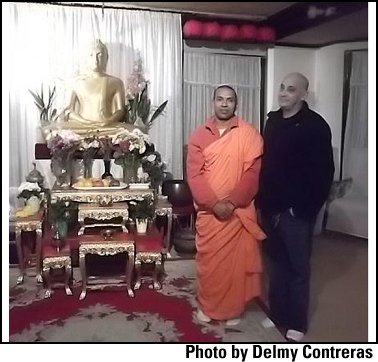 Four at the Door: Punklightenment, March 2011

“Thank god it was just a dream!” Everyone has woken up from a nightmare with the relief of discovering the just-experienced horror was only a dream. But what if it wasn’t just a dream? What if the excruciating events of the past are simply replaying themselves on the mental screen of the subconscious? Waking up makes very little difference in that case and one feels drained and devastated after a restless night on the torture rack of a painful memory. This is what had been happening to me for the past year and a half, so, as always, I was off to see the wizard—another esteemed Buddhist monk—so he could imbue me with more mental medicine. Having lived with the monks from time to time, having studied with and from them even more, and perhaps also from attending a few too many Grateful Dead shows back in the late ‘80s, I firmly believe the dream world is just another dimension, a parallel plane just as real as this one. But never mind that for now….

“Bhante, I need direction” I humbly stated. “You have direction” was his curt reply. “I am haunted by the past” I succinctly elaborated. “That is your choice,” the monk replied without even looking at me. “What is your advice?” I implored. “Keep teaching, keep learning, and keep writing.” Then, the overworked and fatigued Bhante Piyananda excused himself and went to bed. “Fuck, that wasn’t much help,” I thought to myself as I made the dark drive home from Los Angeles back to the Inland Smogpire. Basically, he was saying I already have what I needed, that I create my own mental reality and to keep doing what I do…but, I wasn’t able to get to the heart of the matter.

Sometimes, all too-often, I lie in bed at night and relive the past and the battle begins. I try to think lofty, benevolent thoughts and to wish for the well-being of everyone on this planet, but then the mind drifts to a dark and destructive place,a place where regret, jealousy, and the powerful lust for revenge lurk in smoldering silence. The war is on. The enlightened self wrestles with the demon of disgust. Wicked fantasies begin to form. The mind gives in to the seduction of resentment and anger. I think the most vile, horrendous things; blood-soaked images of clever and violent retribution that I would never act upon or even dare to put in print. This is definitely not the best way to approach a night of restful slumber, nor is it a good way to put the past to permanent rest. I know I was choosing to let my mind chew on itself, but just like listening to Black Flag’s “My War,” Smut Peddler’s “Fuck You, That’s Why,” or Descendents “I’m Not a Loser,” it sometimes feels good to be mad, vengeful, and vehemently disgusted…for a while.

This is what I wanted to discuss with The Buddha, so I went back to the Dharma Vihara with a few close friends the following weekend.Without any prompting from me, the very psychic Bhante Piyananda began his Dhamma lecture (truth talk). This is what he said, and this is what he told me to write to you: Four travelers arrived at a family home. Their names were Money, Prosperity, Peace, and Happiness. The husband and wife of the home greeted them at the door. Money spoke (doesn’t it always?) “You may let one of us into your home. If you choose correctly, the other three will follow. If you choose incorrectly, then only that entity will enter your home.”

Now, before you read any further, stop for a moment and think about it. What would you choose? Who would you let enter your home in the hopes the other three will follow?

The husband of the house chose Money, but his wife quickly scolded him. “Don’t you realize that money will not keep coming unless we choose Prosperity first? The two argued long and loud until their daughter implored, “May we please invite Peace into our home? That is what we really need.” The daughter then became embroiled in the quarrel.

I chose peace because that is what I have been seeking (with only limited success) for so long. It seemed logical to me to deduce that there can be no peace without happiness, and while prosperity and money are both important, neither are as important as peace and happiness. Three of my companions chose the same; we chose peace to enter first. Only Chris chose correctly, “Happiness” he said and the Bhante affirmed his choice.

The sage explained that peace is in short supply in this war-torn world. Even so, people can find happiness in the midst of chaos. Happiness takes precedence over all the others. We must strive for happiness first and foremost no matter what our state or condition.

I remember once seeing a dying woman at a nursing home and I asked her if I could get her anything. Surely, she was miserable and wracked with pain while waiting to die in that stark, cold, and empty room. “No,” she smiled as she held up her Bible. “I have everything I need right here,” and she started singing. It totally blew my mind and taught me to respect Christianity a lot more. It was working for her even if it did not work for me.

Bhante Piyananda then taught us that ideas come in three phases. One, the idea is vague and barely recognizable. Like a person on a far away horizon, we can see, but are not sure what or who it is. Two, the idea becomes clear. We see who or what it is in clear focus. Three, the mind decides how to act upon the idea. I raised my hand and asked to summarize in respect to my own dilemma. “When I notice the hateful thoughts begin to form, I must not let them crystallize into tangible focus. I must force myself to think something else; anything else. Thoughts and feelings are like visitors; unwelcome visitors who cause bad feelings should be turned away long before they reach the clarity threshold of admittance to the mind. Otherwise, I am just setting the stage for another round of nightmares and I can never truly be liberated from the past.” “Precisely” was the monk’s reply. He then had the four of us repeatedly recite in unison, “I renounce hatred,” and, “I will not surrender to the past.” Strange, I already knew all this, but when Bhante told me again, it seemed to suddenly make a whole lot more sense. I slept better that night than I had in months. I guess that’s why it’s not a good idea to listen to Conflict, Dead Kennedys, or Subhumans right before going to bed…unless that works for you. Goodnight dear reader. Sleep well.