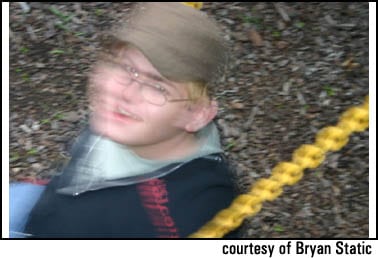 My mind is playing tricks on me. I know it’s a cliché and I know we punks hate clichés (Up the punx, right?), but it seems more appropriate now than ever.

I’m not talking about the standard tricks minds usually play on people, like moving their car keys, absent mindedly filling out paper work, or removing their internal organs as a practical joke (“Oh, brain, you got me good that ti—AAAAAH! I TASTE BLOOD!”) Oh no, my brain is a little cleverer[1] than[2] that[3].

I’ve been blessed/cursed with an abnormally short attention span and horribly bad memory, which is not such a bad thing. It only distracts you by making you write notes on yourself because you never remember to bring paper with you anywhere. Or a pen. So you choose to engrave the message into your arm with your keys. But it has its perks, with my brain, I can have a ten CD changer and, to me, it’s like an endless supply of new music! (Wow, who is this? Ramones? Doesn’t ring a bell…)

Over the years, I’ve learned to accommodate my particular situation with sticky notes at home and a sharpie to write on my arms. Most of the important messages of my life have sunken into my skin in the form of ink. Somewhere in my ink-stained insides are some rather stupid things I have written on my appendages over the years. Like in ninth grade when I wrote “Free” on my right hand over and over again and proceeded to do likewise for my left hand but switched words to “Time” instead. All for a joke that only got three laughs (Yes, I keep track of how many laughs I get for every joke. If I meet you and you laugh, you go on the list.), but the Volleyball Net Incident was supposedly hilarious.

Let me set the scene. This story took place in seventh grade, hanging out with the usual gang of idiots. It started one day in gym class, which, despite its name, mostly took place outside the gymnasium. My friends and I got into a conversation about our physical abilities: jumping, running, double-jointedness, that sort of thing (I can bend my top knuckle without bending the middle or bottom knuckles on several of my fingers, but I didn’t find that until two years later). One way or another, we decided to see which of us could jump over the tennis net that was right next to us. It seemed like a grand idea at the time (like most things do), how could we help but agree?

Two of my taller friends preceded me and missed the net by quiet a few inches. I of course saw no reason not to try jumping this… uh… this net of … evil? Sure, let’s go with that. So I began my run…

And here my memory gets a little fuzzy.

I remember leaving the ground, I remember seeing a kid in a yellow shirt doing something at one end of the net, and I most definitely remember falling and landing on my wrist without making it over the net. My next clear memory came from a lunch time that followed the episode at a time in the future which I can’t recall, but I remember we discussed the event of Bryan hurting himself. I gathered from what they said that the kid with the yellow shirt pulled the net up on me and I tripped on it. I also apparently got out of gym for the next day or so. I spent the next week or two with a support bandage on my wrist to help it heal and was the butt of many masturbation jokes.

THE POINT IS, however, that I have no point.

My brain keeps tricking me by making me think I have something either important or relevant to add to one conversation, whereas, in reality, I have absolutely nothing to say. I will begin my sentence, which is the build-up to my brain’s private joke, with elegance and sophistication. I will make a logical and easy-to-understand transition from the current topic to the point my brain is tricking me into believing, and I’ll arrive at the big moment of my spiel and all of the sudden… the term “brain fart” comes to mind, and it seems appropriate.

The tragedy of all of this is now you are in the middle of a sentence with people staring at you waiting for you to finish. If you’re lucky the people around you will be in an apathetic state of mind or so out of it that you couldn’t talk to them if they wanted you to. If your case is the latter, it’s easy to dismiss your faux pas by simply just lowering your voice and beginning to mumble and everyone will agree so they won’t look stupid in front of their friends. Another technique to try is simply stop talking and act like you didn’t say anything, but there is no guarantee that will work. If your case is with normal people, you have a few options.

If you are in possession of a slightly above average vocabulary, simply begin a reverse transition to the last subject talked about. When you deliver your sham of contribution to a conversation you were never really a part of, think of an excuse that allows you to wonder away before any questions arise.

Example: “I think the movie was a metaphor for struggling”

“Well, if you look at in a certain light, the movie could, uh… (BRAIN FAILURE), be seen as a story which represents lifetime experiences in the context of turmoil and fighting for the cause that not everyone supports. Perhaps it questions human mortality as a whole in the fact that it shows the hardships we endure for nothing. Excuse me, but I think my arm is on fire.”

2) Pretend that present company is stupid for being interested in the subject in the first place.

I have a friend or two who seem to love this technique. The title is pretty self-explanatory. All you have to improvise is a few choice insults that will leave your comrades wondering if you were shouting Shakespearean text at them.

Example: “I thought the band could have used more bass in their second-guitar amp tonight.”

“Well, I remember that along time ago, the bassist had said ‘We have traveled across the country and lost more members than people have seen our shows.’ So once they decided to… (BRAIN BLARF) you know what? Who the hell still listens to that band? Their last good album was in 2002! 'Tis well thou art not fish; if thou hadst, thou hadst been poor John!” (EXIT STAGE LEFT)

“What the hell is up Bryan’s ass?”

This is seemingly the easiest technique to exercise. It is meant for those with a quick mind that goes a thousand mile an hour. It consists of trying to start answering the question, failing, thinking of something else, verbally expressing it, and then coming full circle without ever really answering the question.

“It was the strangest book I had ever read, but at the same time the metaphors seemed oddly familiar. I mean… you know, the best book I ever read was Hop on Pop, and I don’t think anyone will ever top it. Speaking of words that rhyme with drop, what was the last hip-hop album you ever listened to? I think the last one for me was the Dwarves. I know they aren’t technically hip-hop, but you know that song “Massacre” off The Dwarves Must Die? It’s catchy and it’s definitely rap. I still haven’t gotten around to reading Blag’s books.”

This is the method I use the most. It’s simply saying, “I totally forgot where I was going with this.” If more people could remember to do this, Rev. Norb’s column would only be a quarter of its normal length. This is why most people avoid this choice for as long as they can.

This is the entirety of my existence when I am in any sort of social setting. Perhaps one day they will find a cure, but until that day, let us all exist as poor Johns. Because, in the end, isn’t that what life’s all about?

[1] I had no idea “cleverer” was a word; I always thought it was “more clever.” When you say cleverer out loud, it sounds funny.

[2] Also, why is every time I get into a band, Razorcake does an interview or article about them in the next issue? I was just saying three weeks ago how Stressface – Oh… You’re Welcome was an ingenious album, and then BAM! Someone goes and interviews them (I’m not sure who yet, as my issue has not arrived in the mail).