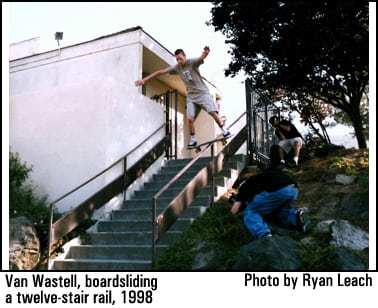 The first annual Jam for Van event was held this April 18 and 19 in Arvada, Colorado. The jam was put on by Dave Tuck and Van’s oldest brother Jeff Wastell, with assistance from the Arvada Army skate crew and many others. The aim of the event was to celebrate the life of Van Wastell—a great person, artist, and skateboarder who left us way too early last September.
Unfortunately, it snowed a good foot in Arvada (a town just outside of Denver) the day before the two-day jam. Dave Tuck’s pool—the focus of the event—was buried in fresh snow, raising the ugly possibility of the event’s cancellation. Luckily, by Saturday the inclement weather had abated, with light rain replacing Friday’s intense snowfall. With newfound hope, Dave and Jeff shoveled out the pool, writing Saturday—the first day of the event—off. With total aplomb, the two assured all in attendance that the pool would be skateable by Sunday. Sure enough, Sunday was perfect: the pool was dry, the BBQ was active, and there was still enough snow on the ground to bury a twelve-pack of beer (nature’s perfect refrigeration). People started to session the pool at around noon. Not surprisingly, the Arvada Army—a group comprised of Colorado’s premier pool skaters—went to town. The Army’s Cam Dowse was throwing down some mean backside disasters; Jeff Wastell backside Smith grinded the shallow end with regularity; and Dave Tuck blasted frontside airs. Foundation pro Angel Ramirez threw backside tailslides over the pool’s stairs and pulled a frontside invert in the deep end. Mike Taylor—a guy known for assaulting mile-long handrails and Los Angeles ledges—surprised everyone, 5-0 grinding the deep end only an hour into his pool skating career. While people came out hard, the session was totally relaxed, allowing newbie pool skaters a chance at runs lined with kickturns and slams.
The first annual Jam for Van event was unquestionably a success. The atmosphere was laid back and friendly—just how Van would have liked it. Van’s closest friends and family came out from all parts of the United States to celebrate his life—people like Alanna Gabin (Van’s good friend), Tina and Eddie Villa (Van’s sister and brother), and Jennifer Villa (Van’s mother). So many people helped out in the preparation for this wonderful event. And certainly Van deserved it. Like so many others who knew him, I miss Van’s presence in this world and cherish the time we spent skating together. 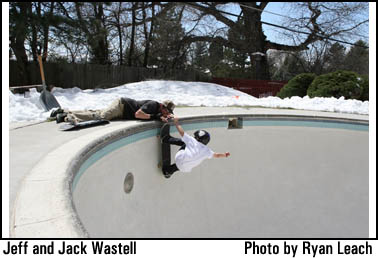 Ryan: Van’s Memorial Skate Jam was held in a somewhat unorthodox place: your backyard. Like the Basic Bowl in Huntington Beach, you built a pool in your backyard for skateboarding. Tell me about it.
Tuck: Yeah. About four years ago, the guys from Team Pain helped me build a pool. The Arvada Army helped out too—which is Jeff Wastell and about a dozen other guys who skateboard. It also doubles as a swimming pool in the summertime, so my kids can swim in it. Although I know Van was more of a street skater, he did skate my pool. So Jeff and I figured we would hold it there. We really wanted to get something off of the ground. My father passed away when I was eighteen, so I know how quickly people sometimes forget. I didn’t want that to happen with Van. I’ve known the Wastell Family for almost twenty years. I remember meeting Van when he was a ten-year-old kid.
Ryan: Tell me about Van’s first setup, Jeff.
Jeff: It was a Billy Ruff deck that I had to cut down for him because he was so small. I also had to re-drill it to get his trucks on there. Everyone in my family skateboarded. Van was the youngest brother. He was probably two years old when he started skateboarding. We had a vert ramp at our old house in Simi Valley, California.
Ryan: Can you tell me a little bit about organizing this event? I know the date had a special meaning.
Tuck: We started organizing this event in January. My friend Mike Daniels—a big computer person in San Francisco—donated some of his time to help us get a website going. There were some ups and downs. It’s hard to get an event like this going for a number of reasons, but the date of the event was really important. Van’s birthday is April 22—which was a Wednesday; he would have been twenty-five. We decided to hold the event the weekend before—on April 19—to help out with people’s work schedules. We wanted the event to be more upbeat, so to celebrate Van’s life, we held the event around the time of his birthday.
Jeff: Tuck and I had been talking about doing a jam event to celebrate Van’s birthday for a couple of months. We wanted to get Van’s friends out here to Colorado. I also knew a lot of my pals out here were going to be down—the Arvada Army skate crew. Those two groups of people were who we really wanted out for this event.

Ryan: Some serious skating went down at Van’s Jam. Who impressed you?
Jeff: The Arvada Army guys. Those are all of my buddies. I skate with them every week. Angel Ramirez—I liked how he could show up and just rip Tuck’s pool. I was also impressed by my son Jack, who is only eight years old. He really recognized what was going on. Jack understood the reason behind the event. Usually, when Jack and I skate Tuck’s pool, I’ll say, “Come on, Jack, let’s take a run.” And he’ll go, “Okay.” And after a little bit, he’ll start jumping on a trampoline or playing make believe. But on Sunday he took so many runs. Jack knew he was skating for Van.
Tuck: Cam Dowse of the Arvada Army was killing it, for sure. Prior to Sunday, Mike Taylor had never skated a pool before—and he really impressed me.
Ryan: Mike was scrapping 5-0 grinds in the deep end only an hour into his pool career. That was pretty gnarly.
Tuck: Exactly. Angel Ramirez’s frontside invert was crazy too. It was just a good show all day long. I’m glad we didn’t get invaded by a bunch of skaters. I would’ve turned them away had they shown up. Crashers like that would have just made my pool crowded. And people like Mike Taylor—guys that had never skated a pool before—really wouldn’t have gotten in any runs. It was just a nice, mellow session all day long, which is what we wanted for this event.I’m just glad we had a broad base of people who came out. (Van’s good friend) Alanna Gabin flew out from New York. You and Mike Taylor came all the way out from California. A lot of Colorado people who knew Van showed up. It was a good core group of people.
Ryan: How do you feel about the event now that it’s over?
Alanna: I felt it was a total celebration and remembrance of Van. It helped me out—being with people Van loved so much. I hope we will do it again. It wasn’t just people coming to skate. Everyone went there to remember Van. And it certainly wasn’t a day to be sad.
Jeff: I feel good about it. That storm put me in a bundle of nerves. We lost Saturday. We had all of these people coming from far places. And if it were just a couple of degrees colder on Friday, we would have lost Sunday too. It could have snowed up to three feet in a day had that been the case. I was thinking on Friday, “Man, I hope this event isn’t going to be shot to hell.” And Sunday turned out to be awesome. No doubt about it. It turned out great.
Ryan: Tuck made the observation that Van’s Memorial Jam wasn’t your typical skate jam. People weren’t sweating each other. No one was trying to show the next guy up. It was so relaxed. That really was appropriate. Van would have liked that atmosphere.
Jeff: Definitely. That was the focus. If it would’ve been serious, Van would’ve thought, “To hell with this.”
Ryan: Like Van, Tim Brauch was another amazing skater who passed away too early. I really like how the Brauch Family and some of Tim’s friends hold a skate jam every year to celebrate his life. Are you already thinking in those terms with Van?
Jeff: Yes. We just don’t know if we’re always going to host it here in Colorado or other places. It is really hard for people from California to make it out to Colorado. We just wanted to do it. And Tuck had the perfect place for it.
Ryan: Is there a characteristic or crystallized memory of Van you’d like to share?
Jeff: Van was like me—quiet. He didn’t like the spotlight, although he was in it quite a bit. Van was just a genuine guy. Also, if I had asked him to come out to Colorado from California to skateboard, he would’ve hesitated. But if I had asked him to come out to Colorado to go camping, he would have been here in a heartbeat. Van loved hiking and camping.
Alanna: Van was a Renaissance Man. Skating was just a part of his life. It wasn’t what drove him. I knew Van differently than other people did. We would go to music festivals, talk about books, go hiking, and play music together. A lot of people didn’t know that Van was an avid hiker. He had so many interests—from art to writing to acting—especially admiring Crispin Glover. I could see Van following in the footsteps of his brother Andy—doing environmental or even urban research. Skateboarding sometimes frustrated Van because it limited him. People would focus on things that he felt weren’t important. Van was just one of my friends—we could be anywhere in the world and he would not complain. He was always grateful for the opportunity to travel and for the things given to him. More than any other person I’ve known, Van cared incredibly for his family.