All photos by Katz

I had been anticipating this festival for many months like a child waiting for that quarter from the tooth fairy. Balzac from Japan would be touring on our shores for the first time. I hadn’t seen The Dickies in ten plus years, D.I. in fifteen plus years, The Misfits in twenty years, and never had seen the Damned. Agnostic Front were on the tour but did not play this show.

Shit, what a drive. I hate driving. This was pretty far for me to go see a gig, but the line-up was fantastic and you couldn’t asker for a better roster. I don’t know why they couldn’t secure a venue in Hollywood. I made up my mind and made the arrangements to go. I enlisted the help of my brother, Katz, to handle photo duties since he is the photographer of the family. I drove and drove and drove. I’m exaggerating, but it did take a little over an hour getting there.

We arrived and tried to get in. The list that I was on wasn’t there yet. The band had not shown up yet. I was having images of a previous concert I went to where the list didn’t show up and me standing out front, losing out. Luckily, said band showed up a half an hour later and we were in the venue. With photo pass in hand, I set my brother up to shoot at the front of the stage.

The local promoter put on three local bands, which I never got the name of and didn’t find that entertaining. I don’t know why they were needed since there were already six bands on the bill. It only took time away from all of the sets and made the night longer.

D.I. took the stage and Casey Royer, the singer, was his usual self, talking to the audience and trying to push people’s buttons to get them more energized. It was a super short set, but I was glad they included old favorites like “Richard Hung Himself,” “OC Life,” and “Johnny’s Got a Problem.” They can still play a tight set after all these years.

Problems arose after the set because the photo pass that my brother had on was the wrong one to be issued for that night. The chief of security confiscated the pass that Katz had on and he told my brother to get the proper pass from the box office. Seemed easy enough. He went up to the box office. They had no more passes and needed to look for more. Typical. They couldn’t find any. Shit, no fucking photo pass. My brother talked his way back into the barricaded area in front of the stage for the next band.

Balzac was next. They were the baby band of the tour, only existing for a mere eleven years. I was excited to see these Japanese devil rockers in action. As soon as the first chords rung out, the crowd felt their energy. A small pit was started and arms were in the air cheering them on. I figured that most of the crowd had never heard the band, but they were truly won over by their catchy songs, Misfits image, and tight set. A young gentleman standing in front of me said that the band was great, whoever they were. I can’t recall what songs they played because I don’t really know the song titles to any of their songs. I do know the songs when I heard them. I guess I need to cut back on my music purchases and pay attention to what I have. I do own quite a bit of their CDs and sung along to most of the songs that I recognized. Another short set. I think they barely got twenty minutes. I felt like I was in a time warp. The set started and soon ended. I was like an addicted crackhead. I needed more of my drug to keep me happy.

My brother was sweated like a two-dollar prostitute by the vice squad and was told that he couldn’t shoot from the protected barricade area anymore since he doesn’t have a photo pass. He was allowed to shoot from the crowd on the other side of the barricade. So, he squeezed his way to the front to get a good position for the next band. 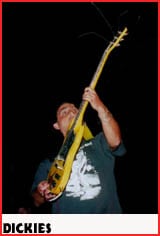 The early forefathers of the LA punk scene, The Dickies, soon mounted the stage. I think Leonard and Stan Lee are the only original members. Leonard looks like he has gone to hell and back and Stan Lee looks perpetually thirty. But the music is timeless and never disappoints. Leonard continued on the tradition, using various puppets and stage props to play out the lyrics to the songs. He also had a ton of energy still while on stage. I was worried that he might collapse from all the jumping and twirling he was doing while on stage. They played old classics, like “Paranoid” and “Gigantor,” to songs off their current Fat Wreck album, like “My Pop the Cop.” Leonard brought out the penis puppet for “If Stuart Could Talk.” One thing I can say is I have never seen a bad Dickies set in twenty plus years. They didn’t play “Manny, Moe and Jack,” but I was truly entertained.

Then came on the UK forefathers, The Damned. I was never a big fan. I got into punk on the second wave in the late ’70s. I have heard the songs through the years, but I was never intrigued enough to buy any. Seeing this band live is another experience and their records don’t really do them justice. Dave Vanian should have been the singer for the Misfits for this tour. He was that good. Captain Sensible played the guitar with precision and looked, from my view, to be enjoying every minute. Patricia Morrison is such a good bass player. I wanted to quit playing myself because she put me to shame. Pinch is an underrated drummer and holds his own. The songs I recognized were “New Rose,” “Democracy,” and the set closer, “Smash It Up.” I was truly blown away by their set.

As the set ended, I saw bouncers carrying my brother away out one of the side doors. Did he get in a fight? Did he get kicked out? No. He passed out from heat exhaustion. I ran out the side exit to see my brother on the sidewalk, exhausted. I ran back inside and bought the expensive water that the vendors sold and gave it to him to drink. Shit! I lost my photographer. Once he regained his energy, I had him sit in the back with some friends who also attended the gig.

Now headlining: The Misfits! The only remaining semblance of the once classic band is bass player Jerry Only. Joining this circus show, vaudeville act is Dez Cadena on guitars and Marky Ramone on drums. All the opening bands had to share a small set-up of amps and drums. The Misfits had their own gear and it monstrous. The only other band that I can compare the set-up to is Motorhead, just a mountain of speakers. Jerry had the biggest rig going with six humongous bass cabinets and Dez had four. Even Marky had a bigger drum set than the openers. Did they sound louder? Definitely. But they sounded like wall of white noise. All I could hear was bass guitar, snare and bass drums and barely any vocals. If the kids didn’t sing along, I wouldn’t have known what the hell they were playing. The band started off with Misfits songs to lure and capture the young crowd. Let me tell you, Jerry is no Glenn Danzig by any means. Also, to hear Jerry and Dez sing Ramones covers would make me assume Joey Ramone is doing cartwheels in his coffin. The Black Flag covers were equally as bad. To top of this madness, they were previewing songs off of Project 1950, which is a collection of ’50s cover songs. I saw the Misfits in 1982 and this incarnation feels like a parody. Adding Dez was a good thing, but don’t market his past membership with Black Flag. Marky Ramone, in my opinion, should not be in this band. The Misfits and Black Flag songs were not good for his style of play. It was punk rock karaoke at its saddest time.

Burnt out from that noise set at the end, we packed up the car and looked forward to a long drive home to a burrito, a beer, and bed. The perfect recipe to end a night.