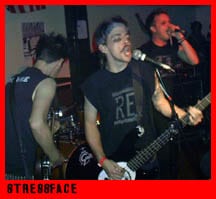 ALL PHOTOS BY DENISE ORTON

There are a lot of things that I absolutely love about living in Gainesville. To name a few: the people, the shows, and the abundance of cheap beer that flows like a river into our guts. This past weekend was the epitome of everything that is right and good in our world. The Fest II took over, and for two days, everyone was on vacation. Even us townies.

It all started on Friday, October 17. Three shows were taking place in unison throughout the town, and I opted to start out at Market Street Pub. With my twenty-first birthday a treacherous thirteen days away, I brought along the early birthday present I'd received earlier that day: a flask which I had filled with a mid-grade, though potent tequila.

After two watered-down Sprite and tequilas with a squeeze of lime (sounds gross, but it's pretty good) and three horrid games of pool, I headed toward the stage area to watch Stressface, who were pinch-hitting for the absent Small Brown Bike. They were awesome and hilarious as usual, but the edges on everything were still a bit too sharp for the festing mentality. I headed down to the bar and ordered another Sprite, into which I dumped the remaining tequila. Deciding that it was best to quickly down that drink, I sent someone to the bar to order me another.

During that blur of a time span, Chicago's fabulous Lawrence Arms took the stage. By the time I made it back to my vantage point near the front, they were about done. They played some of my favorites from the new album and some great old ones in the measly thirty minutes that they were allotted. 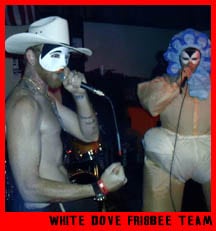 By the time that last double tequila drink was down, I was completely prepared to watch White Dove Frisbee Team. This group is comprised of two men, presumably Gainesvillians, who wear masks and a variety of costumes while rapping about such things as George Rebelo's (Hot Water Music's drummer) foreskin, fecal matter, and Shermy D (a fellow Gainesville rapper). I laugh my ass off every single time they play and that night was no exception, though I think my laughter was mostly induced by the bewilderment of the young audience before them waiting to see Against Me!. 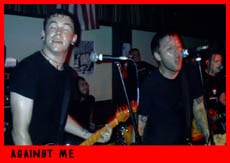 Up next was Against Me!. The crowd was a turbulent sea during that last hour and a half. I was able to elbow my way to the very front to take some pictures. Only a few shots are without a stray limb of some sort right down the middle. It was a wonderful set, though. Full of all the heart-wrenching energy and the envy-inducing youthful idealism that we have come to associate with Against Me!.

When Hot Water Music took the stage, the temperament of the crowd escalated from a tropical storm to a full-fledged hurricane. They played remarkably as always, feeding off the energy of the screaming mob. Fresh off tour, they were tight and impeccable. I just wish that I had been sober enough to recall any of the specifics of their set list. 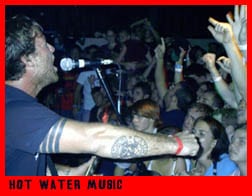 After the Market Street show ended, I got on my bike and hauled ass across downtown to Common Grounds, where another show was taking place. I managed to get inside a few minutes before they decided to call it officially sold out.

House On Fire was about to take the stage. Before their first song, they announced that with their recent line-up change, they had chosen a new name: Black Cougar Shock Unit. My friend, Jen Davis, and I kept screaming, "Cobrafied! Cobrafied!" in recognition of the discarded name that we had chosen for them weeks before while drinking on our porch. After every song, we continued to scream, "That was so fucking cobrafied, man! So cobrafied!"

After their set, I stepped outside for a bit of fresh air and saw a large, stumbling man with arms flailing about in the gas station parking lot across the street. It was none other than the patron saint of Gainesville himself, Davey Tiltwheel. He was over there with a whole crew of San Diego kids who couldn't get into the show.

I spent the rest of the show drinking beers in the alley next to Common Grounds. Surprisingly, the only nudity that I saw that night was a well-timed and tasteful naked handstand executed by Travis Dukes [of Hillsborough]. When that occurred, it became abundantly clear that the real party was outside in that alley, not inside the venue. When the show ended, there was talk of an after party across the street from Replay Dave's house.

As people started to disperse, I grabbed my twelve pack of Busch Light and headed off on my bike. I don't know what I was thinking, but a few wrong turns were made and I ended up a couple blocks off course. Every once in a while, you hear about some drunken jackass who gets a D.U.I on their bike or on a skateboard or in a canoe. That night, I was convinced that I was about to be that guy. I was swerving like hell because I could not for the life of me figure out a proper way to balance the beer. It all came to a head when I unexpectedly flew off a curb and ended up impaled on my handlebars, legs tangled this way and that throughout the bike, with my twelve pack scattered across the sidewalk and street. I scrambled to get up when I saw headlights approaching, certain that it was a cop. The car never slowed down, though, and proceeded to run over one of beers, causing the delicious liquid to explode all over the road. All I could do was recover the surviving brews and limp the remaining blocks to the party, dragging my mangled bike with me. The rest of the night/early morning was a blur of beer consumption and slurred speech.

I woke up way too early on Saturday morning. Bodies were crammed onto every upholstered surface in my house. The smell of old beer and sweat hung pungently in the air. Sore and blistered, I took a shower. When I emerged, some of the bodies had begun to stir and rise. 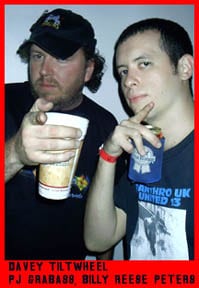 Half and hour later, Davey, Darren [from Brooklyn], and I were making the rounds about town to see that everyone was accounted for and to get supplies for that afternoon's barbecue/ Roots Rock Show at The Future House. Going to the grocery store with Davey Tiltwheel is always an ordeal. No matter how simple your intended purchase is, be sure to allot at least one hour of in-store time. Too many distractions, too many noises, and too many old ladies giving out samples of salmon to talk to for twenty minutes.

Upon arrival back at the house, everyone was awake. Ten to fifteen people were crammed onto the front porch, most of whom were already drinking Busch or PBR. I mixed two pitchers of mimosa, hoping to catch some sort of buzz before heading out for a day of bluegrass and country music under the sun. A whole pitcher later and I felt nothing, so I gave my guests directions to the Future House and departed on my bike, which was acting a little shifty from the night before. When I left, Davey was sitting in one of my van's captain's chairs on the porch, drinking mimosa from a vase.

The afternoon at the Future House was one of the best parts of the whole weekend. Two hundred hung-over people were crammed into the backyard. Gainesville is a town of troopers, that's for sure. Practically everyone was drinking again, making burgers and hot dogs and steaks on the grill. After the previous night, that barbecue was just what the doctor ordered.

Guerilla Grass, Gainesville's resident punk-kids-who-play-bluegrass band was next. They are one of those bands that gets better every time they play. Instrumentally very good, vocally a little rough, but all around a great band to lay in the grass and drink beer to on a sunny afternoon.

Last up was Whiskey and Co., Gainesville's resident punk-kids-who-play-country band. They were a lot of fun, as always, sticking to the good country music formula of songs about excessive drinking, drugs, and love woes.

Later on that night, painfully sober, I rode up to Market Street again to watch Savage Brewtality. I got a whiskey sour and stood on the outskirts of the crowd. They are a new band that everyone in this town has embraced with open arms. As indicated by their name, they are pretty much all about drinking a lot a lot. It features members of Army of Ponch and Rehasher. Keith Boyle, their animated first-time front man lets his inner demon out as he screams tunes such as, "Pink is the New Black, "Burrito Attack," "Monkey Hate Clean," and "I've Got a Problem, I've Got a Boner." It's pure gold. 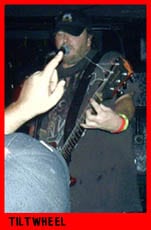 That was the moment when every single person became focused and unified in our various states of sobriety. People threw their arms around each other, raised their drinks in the air and then rocked the fuck out. By the end of their set, half of the guys in the room were shirtless, everyone was sweaty, and most of us were a little hoarse from screaming along at the top of our lungs. It was the most amazing feeling to be in a room in this little corner of the Earth with so many other people who appreciate a band that is seemingly the best kept secret in punk rock. It was the moment that we all long for every time we venture to a punk rock show.

There were a few other shows around town still going on, but for me it wasn't going to get any better than seeing Shitwheel play in a room full of fifty of our drunkest and dearest. My Festing was over. I'd reached the peak and it was going to be all downhill from there. The Fest III will have a lot to live up to.