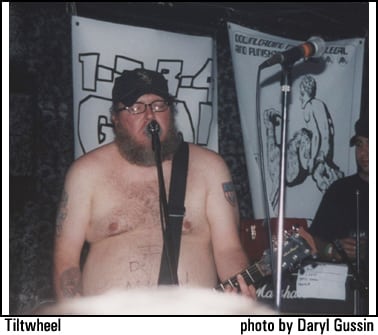 The Fest. To those not in the know, it may seem to be just a weekend of good bands. To others, it may be an excuse for those who like to drink to just get drunk. While there are both a lot of good bands and a lot of getting drunk, the Fest is much more than that. To me (and many others) it’s a family reunion. Yes, there are a lot of good bands and yes, there is a lot of getting drunk , but it’s more than the two of those. It’s being with friends from all over the world for three days: friends who you met solely based on this thing called “punk rock.” I’ve been going to shows now for over ten years and working at venues/booking shows for about seven of those years. Weekends like this make all those nights of being one of five or six people at a show worth it.

Enough nostalgia. Back to The Fest. This year was my third year to make the eight-hour drive with fellow Birminghamians. Hayley, Leslie, Will and I got on the road around 11AM on a rainy Friday morning. I was still very hungover from a long night at the Plaza the night before (side note: another benefit of the Fest is having some amazing shows the days leading up to it).  Because of this, I opted to sit in the backseat with my pillow. Everything was fine until we hit Georgia traffic. I, like a few others, have a particular statred for Georgia, so it was no fun at all. Once we got out of the two hours of traffic, we were cruising along just fine, singing along to our favorite punk rock tunes like any good Fester. Then out of nowhere, our VW Pasat starts yelling at us to stop and pull over. We do, but everything seems fine. We call our friends who are behind us and let them know they may have to pick us up and we keep going. The car yells at us several more times, until finally we decide the best idea is to pull the dipstick out and drive the twenty some odd miles to the exit. I call the hotel and let them know we won’t get there until after midnight. Everything’s cool. 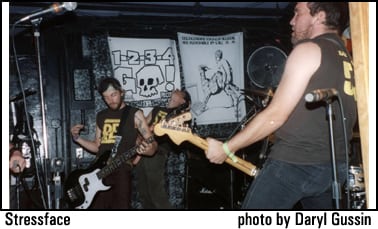 We get our first of 6,549,871 arm bands for the weekend and I decide to head on down to Common Grounds. Leslie, Hayley, and I walk the few blocks down to the venue. They realized they didn’t have their IDs so they headed back to the car to get them while I got in line. I immediately see two friends from Boston who I haven’t seen in almost a year and a half. I realize just then that I’ve been in Gainesville for less than a half hour and it’s already begun. As soon as I get into the venue, I’m overwhelmed with joy as I look around and see so many faces I haven’t seen in a year. I go out to the porch and start my tab, then get busy giving hugs and high fives (shameless plug) to all these people I love.  I really don’t think there are words to describe the excitement I was feeling. The meet and greet was paused while I went inside to see North Lincoln. It’s been over a year since I had seen them and though not their best performance (Kevin had lost his voice from the show the night before) it was a fun time. After their set I went back out on the porch to talk and wait for Smoke or Fire. During this half hour, I think I consumed at least two beers and a couple of shots. They set up to play and the girls and I went back inside to get a spot up front for their set.

Now, most of us know that I’m not great at describing bands or giving reviews for shows, but holy shit, these guys were amazing. I literally had tears come to my eyes when thinking of how much they’ve grown into their own over the four or five years I’ve known them. These guys are seriously one of my favorite bands and have been since I picked up the Workers Union EP years ago. After their set, I went back outside to the porch and took a few more shots with friends in the rain. By this point, nearly everyone was soaking wet so I went ahead to meet back up with my crew across the street at The Side Bar for one more drink and to watch The Arrivals. Whilst watching this band, I met an interweb friend named April and she pinned me. It was real sweet. I think we kissed too! We ended the night with a couple of 5 Star Pizzas and then headed to the hotel.

Saturday morning, our room stunk so bad from all the wet clothes and body sweat from the nine people, but it was almost refreshing. We were at the Fest so everything was cool. A quick trip to the VW place (which would later become enemy #1) then we were off to Leonardo’s, but not before finding out that more Birminghamians (Jaybells, Barker, and Diana) were also staying in our fancy hotel. The two of them proceeded to chase us for the rest of the day. We finally lost them when we headed to a house show to see more friends (the band Jena Berlin). To our surprise, there was a keg. Whoever invented the Keg-O-Rater is pretty genius. I want one of these things. The backyard filled up pretty quickly and by 2 PM one keg was killed and another was on the way. We were well into our way of an all-day drunk day and I was okay with that! We left the house after the cops made them move everything inside. 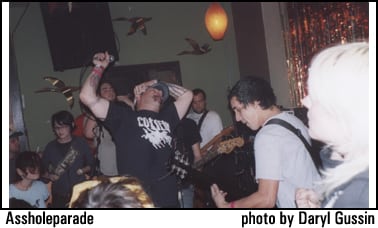 A little more hang out time and then it was decided by Leslie and I that instead of immediately diving into Sparks mode, we needed a nap. It was a much-needed nap, though it did cause Leslie to miss a couple of bands she wanted to see. I’m hoping the fact that we walked dirty around downtown Gainesville made up for that. When we awoke it was off to meet up with new friends and have a couple more drinks and get the night started.

I finally got to see the Ergs! which made me a happy girl. If you’ve never listened to this band you should and now. After they finished, we ran over to another bar to see One Reason. This was by far my favorite set of the entire weekend. The sound guy held my glasses while I danced and sang along until I had no voice. I love that band! We finished up there and I headed over to yet another venue for some much needed hang time with my California friends. Thankfully, I was able to get into the maxed-out venue and as soon as I did, it was shot time with friends new and old. My favorite new shot: casino. It’s Crown and lime juice and it’s amazing, though I don’t suggest having six in one night because you will vomit just like I did. I did make it to the restroom, which is much better than most. 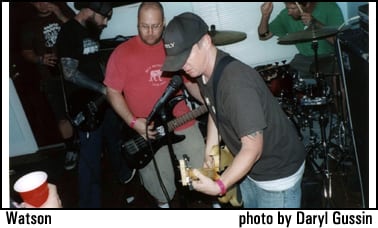 Glass & Ashes played one of the most amazing sets I’ve seen. I spent most of this night catching up with old friends and making new ones. After things ended, we headed over to watch Fest darlings, Dillinger 4. Seeing them on stage at the Fest is kind of definitive of the entire weekend. A bunch of friends, happily drunk up on stage together (some of them nekkid) hugging and singing and just having the time of their lives. Another testament of what this weekend is really all about.

On our way back to the hotel this night we picked up a “hitchhiker.” He wasn’t really a hitchhiker, he was just a fellow Fester whose ride left him and needed to get back. We stopped to get food and then he kind of forgot where we were supposed to turn, but on the third try we found it. Finally, we were back at the room and ready for a good nights sleep. 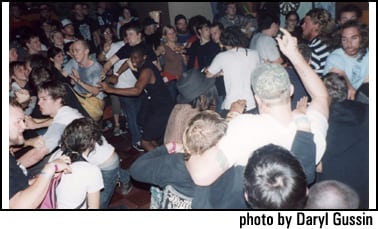 Sunday morning rolled around and we once again woke up and headed to Leonardo’s. This time the Birminghands had a tagalong: Mitch. We ate and then headed down to Common Grounds for mimosas (it’s a tradition to drink mimosas on the porch on Sundays, unfortunately some got there too early and went through the entire stock of champagne, so I had to settle for screwdrivers). This last day of the Fest is the final time to say farewell to those friends who you’ve tried to cram as much time in with as possible. It’s the same feeling you got when you were young and it was the last day of camp. Here, you’ve been with so many people you love for the past forty-eight hours and made so many new friends in that same amount of time and now you only have one more day left. It was bittersweet, but in comes with it, you know? Sunday was a friend day. I watched Defiance, OH with my best friend, then I headed over to watch my friends Ryan and Vera do an acoustic set of their band Lock & Key, and then I almost literally ran the five or six blocks to catch the last two songs of O Pioneers!!! Just in time to catch their song “The Weather Underground” (otherwise known as the “We’ve Got Too Much Heart Song”) and that was the perfect way to end my weekend. 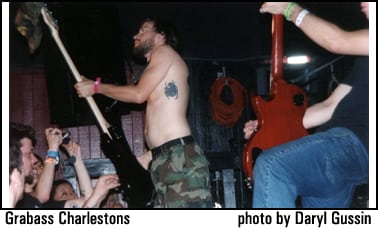 There was more that happened on Sunday night: like watching Vena Cava play and meeting another interweb friend, I vowed to marry Toshi so that he wouldn’t have to leave the States, there was a house show featuring Lock & Key, The Will Butler Death Squad, and a really, really bad Against Me! cover band. But in reality that last song of the OP!!! set was really all I needed. See, that’s what it’s all about. We were all down in Gainesville because we love punk rock music and because we still care about what goes on. It was more than just the $1.50 PBRs, the casino shots, and the amazing bands. It is about being with other people who care just as much as you and I do about what is going on. Don’t listen to those who just sit back and bitch and moan about people not doing anything to make a difference. Those are the people who probably aren’t doing anything. There are hundreds of people who do care and every year we gather together in Gainesville, FL for THE FEST.

NOTES:
-Hotel management found out we had nine people instead of just the two we’d registered and charged me extra money.
-The VW Pasat is still currently in Gainesville, FL. We hate that VW place. We hate Enterprise Rental Car, and we had to take the Greyhound home.
-Our friend, Matt Mexico, almost caused us to miss our bus in Tallahassee.
-Thanks to Matt Seward for picking us up from the bus station at 6:40 AM.
-The following people inspire me to continue on in this “punk rock community”: Floyd, Toshi, Todd, Will Butler, Chuck Daly, Eric Solomon, Fake Problems, OP!!!, Joshua Matthews, Aaron Hamilton, Katie & Allison Crutchfield and so many more.