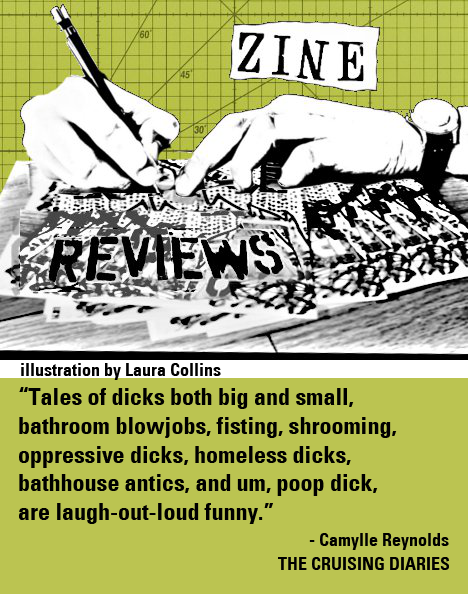 Featured Zine Reviews from Issue #83: Been doing this zine since Methuselah was in elementary school

ARTCORE #32, £5.00, 8½” x 12”, 36 pgs.
Welly’s been doing this zine since Methuselah was in elementary school, and it’s one of the few I look forward to reading whenever I manage to procure a copy. I reckon this is ‘cause he and I, being around from about roughly the same place on the punk rock time continuum, share similar sensibilities regarding this whole punk thing—while nothing beats learning about a new band that makes your head turn or catching up with an older group that’s still slugging it out in the trenches, it’s also just as cool to get some insight on where we’ve been as a subculture, and how it’s developed and expressed itself elsewhere. To that end, this issue features interviews with Zero Boys, Poison Idea, Grand Collapse, Zero Gain, Lobster Killed Me, 1984 (a “reunion,” of sorts, featuring two former members of Crucifix), Static Shock Records, and Young Conservatives, as well as a couple of “Vaultage” articles on Adrenalin O.D. and Celibate Rifles, a repress of a snarky English article on L.A. punk circa 1979, and an overview of the 1980s Norwegian hardcore scene. As per usual, the whole thing’s well written and put together with obvious care and thought, and includes a little something extra for the dedicated, this time ‘round a repress of the debut EP by old Inland Empire punkers Human Therapy. A great read, from start to finish. –Jimmy Alvarado (Artcore, c/o 27 Llantarnam Rd., Cardiff, CF14 3EF, Wales, UK, artcorefanzine.co.uk)

DRUNKEN MASTER #13, 7” x 10”, offset, $5, 52 pgs.
Most of this zine is made up of reprints of “Won Ton Not Now,” a comic by Kiyoshi Nakazawa which has run in Razorcake for years. (In spite of the artist’s inability to spell the fanzine in the introduction—apologies via post-it notes accepted. I understand it isn’t in spell check like “cake”... or “razor.”) It’s nice to see them in here all at once. I had no problem reading them over again and even picked up on little details I missed the first time, for instance, how the skullfaced man cropdusting the party is also flashing a peace sign as he leaves the room in his stinky haze. It’s all here, the irritable advice on bar and social etiquette, (questionable) advice on courting and romance (like using your bare ass to compete with the annoying bad boy punk who gets all the babes [it also involves his face, a bit of cleverness and manipulation of bro insecurity]), a piece on why you shouldn’t serve a shark soup, and a personal childhood story/hypothesis on “how flashers and creeps get their start.” (Kiyoshi implies he was able to resist.) Drunken Master also reprints both sides of the illustrated feud with “rival” comic artist Ben Snakepit. Reading a bunch of Won Ton Not Now together brings seemingly random bits of well-drawn weirdness into a whole... that of Kiyoshi’s warped mind. Yep, this dude seems a little unhinged. On that note, get this and we’ll both stay on his good side? –Craven Rock (luckynakazawa.etsy.com)

MISHAP #33, free/trade, 8½” x 5½”, 44 pgs.
I’m so proud to announce a killer issue of Mishap! It’s one of his occasional “book issues” where he covers books he’s been reading. But it’s so much more. The introduction is immensely relevant, a bold defense of stories of all sorts talking about how they “define how we act as social creatures” and how all stories need to be analyzed and deconstructed. He goes as far as to say that everything we say is somehow a story, so they define our reality. The dominant fictional story, our culture, is an oppressive and hegemonic one, so there are plenty of smaller stories to back it up. He calls on us to resist these stories. He continues this line of thought in his review of Shaped by Stories and more importantly when he deconstructs Louis L’amour’s Western novels, calling them out for being racist, genocide-supporting, historical revisionism that we accept as fact because we’re so used to hearing it. He says, “Most white people in the U.S. are predisposed to believe all that romantic Old West bullshit, so writers don’t have to try very hard. When a writer taps into these national myths, they don’t have to be accurate or true because we already believe the lies.” He ties that to current times and how we accept so much racism in media and how these myths allow racialized oppression to continue. Brilliant! –Craven Rock (Mishap, PO Box 5841, Eugene, OR 97405)

TAPE WÜRM #1, $5 color cover, $3, b&w, 8½ x 11”, copied, 26 pgs.
This zine is the project of a serious tape fiend. Leif Lundgren has a strong affinity for what most people view as an archaic medium, so much so that he’s dedicated a full zine to it. Having relocated from Oakland, CA to Japan, he quickly sorted out where to go tape hunting in his new home. I get the feeling that cassettes are regarded as outdated in Asia as they are in the states, as Leif is constantly buying them up with no prior knowledge in some cases. He gives a comprehensive list of the best shops in Tokyo to scour shelves for these spooled wonders. As he goes over in his introduction, points are dealt out for unique packaging: colored tapes, colored cases, screen printed covers, killer art, etc. The zine aims to elevate an interest in cassettes and reviews any and all that come his way. The reviews are brutally honest, snarky, and hilarious if they don’t tickle his fancy. Though if they do, you’re in for an even better treat! Each review is engaging and very entertaining—even when you have no point of reference for the bands discussed, which was often the case for me. Issue number one covers a lot of heavy, metally grindcore types of bands which the author has a specialized interest in. A good portion of the zine also covers being a foreigner and transplant in a completely different culture. Leif moved to Japan to teach English after college and has managed to transport a life of rock, beer, and zines over with him. The first issue (of what I hope will be many) culminates with a show review of Noise A-Go-Go, a rock’n’roll grindcore band that he saw on a whim. In this he shares his worry of not finding the music niche he so loved in Oakland, and the pure elation of finally experiencing it overseas. – Kayla Greet ([email protected])

WICKED VIBES #2, $4, 6 ¼” x 9 ½”, printed, 52 pgs.
I love horror anthologies, particularly EC Comics, The House of Secrets, and anything by Bernie Wrightson. That’s why I was grinning like an idiot during most of Wicked Vibes, a self-published anthology comic. This issue includes a handful of short stories illustrated by different artists but all written by Dillon Hallen with a closing prose story thrown into the mix. Each tale has a tongue-in-cheek ‘80s quality reminiscent of Creepshow, including requisite twist endings and gross out moments. All of the art is well done and sometimes exceptional, especially Richie Murray’s crosshatch style, which reminds me of Peter Bagge or Kim Deitch. Some of the stories are more than competent and even surprising, like “CircuitBeach,” which is about self-aware androids, while others, like “Schlock Cola,” are entertaining in a Troma kind of way. Need more proof that Wicked Vibes is playful smut? Then look no further than the ad featuring a seductive version of Neek, the alien from Joe Dante’s Explorers. That’s a deep a cut. Recommended for those whose favorite police procedural is Sgt. Kabukiman N.Y.P.D. –Sean Arenas (Dillon Hallen, 320 E. Clarence St. Milwaukee, WI 53207, [email protected])

Like our zine reviews? Why not DONATE to Razorcake, to ensure we keep 'em coming forever!