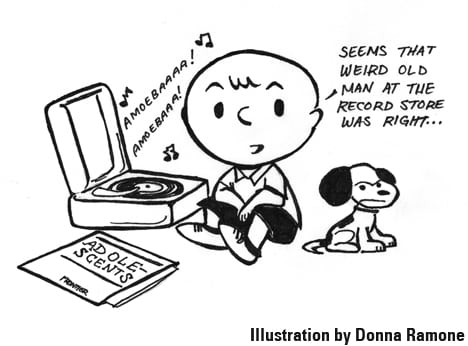 “You guys are mean,” the woman said as she regarded the Razorcake table at the second annual LA Zine Fest.

I took the statement with a grain of salt. She seemed nice.
“How so?”

“You guys didn’t like my band. A Highland Park band.”

“Oh. I’m sorry. We try to give everything a fair shake, but I have to trust my writers. We just cover so much music.”

“Everything on the table’s free.”

“No, take the dollar. For a donation.”

I put it under the pineapple on the table.

Record reviews are the brick and mortar of the culture Razorcake is a part of. Vinyl records are our DNA. We try to be honest, to celebrate the truly overlooked gems. Occasionally, we’re mean because some stuff flat-out sucks and should be mocked. We’re punks, not business people. Then there’s a large grey area. That’s the toughest stuff to write about. Stuff that’s ehh. Or stuff that’s just not doing it for us. We do, however, publish every single review. There’s no “kill” clause that erases a review from existence. There’s no Razorcake consensus if a review is “right.” Because, when it comes down to it, these are just opinions. Zits and all.

I’m sorry that the lady felt bad, but I stand by my reviewers’ ability to call records as they see ‘em.

Integrity’s a complicated cat. Here are some reviews that cover some of the bases I just mentioned.

ADOLESCENTS: Self-titled: LP
Was hanging out at Headline Records (thee prime place to satisfy all your punk rock needs, by the by [I’ll be expecting my payola check in the mail, John]) the other day and found myself and the shop’s owner spending a good amount of time trying to convince a younger kid that the Minor Threat record with their first two EPs on it was a sound purchase. The whole time, I’m thinkin’, “Why are we having to work so hard to convince this little mocoso that goddamned Minor Threat—specifically the very release I did the happy dance over when I found it in Lovell’s Records’ racks back in 1983-84 after spending an ungodly amount of time and effort looking for anything by ‘em—is worthy of his (probably short) attention span?” At that precise second, I realized that another of those so-called “generation gap” moments had just hit me square in the fuggin’ forehead. I’d gone through this previously, sometime in the mid-’90s, when I ran into some spiky-coiffed nincompoops who were all for the punk du jour band at the time but had neither clue nor interest who TSOL were. No, in neither case did I scream “POSEUR!” and proceed to steal their boots/creepers/Chucks. I instead tried to hep ‘em to what I thought was a touchstone band, and one that had a serious impact on my when I was of similar age, without sounding like the old curmudgeon punker asshole I probably sound like right about now. What’s the point to this long-winded diatribe, you ask? Suffice to say that, given recent events, I feel it imperative to direct what follows to the potential handful of folks who may not have come across this album before: forget whether or not you like punk, if you have at least one working ear, YOU NEED TO OWN A COPY THIS ALBUM. This is one of those albums that is a clarion call for all that is good, and right, and wonderful about punk rock, two twelve-inch sides of pure perfection that has changed lives, fueled whole swaths of a certain social movement, and has enjoyed a phenomenal thirty-year influence on an inordinate amount of bands, including a few you probably have heard before. What’s it sound like? Like tens of thousands of kids giving the finger to what their world expects them to be. It’s dark, funny, angry, seeping with teenage angst/frustration/alienation, blahdeeblahdeeblah, backed by some of the choicest punk/hardcore you’re ever gonna hear—fast, slow, melodic, still frighteningly topical, and stuffed to the gills with hooks that will haunt you for the rest of your life. Frontier’s honcho Lisa Fancher has not only made it danged easy to procure a copy by keeping it available for at least the bulk of the thirty years since it was initially released, she’s now added the incentive of colored vinyl to further sweeten the deal. I appeal to your good sense not as an overly opinionated windbag, but as a fellow music worshipper within whose life this very album has served as a soundtrack and stress with every fiber of my being: this, dear heart, is about as worthwhile a purchase as you’re ever going to make. I know I’ve said it before, and I hope my track record is good enough that you’ll listen when I say: trust me, and if you don’t, I’m sure the folks at Headline (shirts, books, patches, and a fine selection of tuneage for purchase [still waitin’ on that check, John]) and danged near anywhere else you can find a copy will concur. While yer at it, I suggest you also buy bigger speakers, ‘cause, as you’ll soon find out, you’ll need ‘em to play this bad boy as loud as possible ‘n’ share the love. Go. NOW. –Jimmy Alvarado (Frontier)

ANCHORS: Lost at the Bottom of the World: CD
The evolution of metal-core is a mystery I don’t think I’ll ever solve. It went from Cro-Mags breakdowns, basketball jerseys, and windbreaker pants to crew cuts, skinny jeans, and melodies galore. One thing I know I’ll never be able to figure out is where the element of danger went. I don’t need to know much about this band to know that they more than likely are from the suburbs, have money (studio time ain’t cheap!), and that they openly embrace iphones (fair use: it’s in their thanks list). All that comfort and privilege equates to nothing more than safety and is anything but threatening. The roots of hardcore have always been punk—whether anyone involved wants to admit it or not—and, quite frankly, there’s nothing punk about any of those qualities. It’s a shame to think that maybe, just maybe, I could be into this because when the bright spots really shine, this sounds like a very potent blend of Sick Of It All, Good Riddance, and All (Chad Price era). When the haze settles, however, all I see is forty five dollar hoodies, bouncers at the door/stage, and kids texting before, during, and after the show as they drive home in their parent’s Audi. –Juan Espinosa (Creator Destructor, creator-destructor.com)

DESPISE: Desolate: 7”
“Desolate” could be the best song about seasonal affective disorder ever written. Bleak and heart ripping, it speaks of the “Dreary shroud of winter” that everyone who lives in Minneapolis understands so well. It’s where Despise is from. It’s where I’m from. It’s where the cold gets into you through cracks in your knuckles and you find your hands bleeding and your face numb and it sometimes feels like it’s pulling you to an ending, and now there’s a soundtrack to go with that feeling. –MP Johnson (Profane Existence)

FITT, THE: Is Dead: LP
I must say that while it is a little embarrassing to admit that I once tried to like bands like Poison and Firehouse simply because I assumed that’s what I was supposed to like being a “metal-head” at the tender age of eleven, I am not ashamed to admit that grunge (however gimmicky and played out it soon became) saved me from continuing to throw my money away on bands who are all probably now working at Jiffy Lube and staring at their old album covers wondering what went wrong. Rightfully due lambasting aside, The Fitt remind me of some of those long forgotten and less appreciated grunge bands from yesteryear who also qualified as hard rock and, in some instances, even metal. I can think of two bands The Fitt are probably fans of. One of them is pretty obvious to me. Helmet. But does anyone else remember Stompbox? No? Take my word for it, they weren’t all that bad and I’m hearing some shades of them in The Fitt. No actual “singing,” no guitar solos, not trying to reinvent anything nor any unrealistic aspirations for becoming a renaissance band of any sort. Just well written and arranged songs culminating with the final track “Helpless,” which is causing me to reevaluate the significance and influence of Black Flag’s My War just as much as Neil Young (whose cover this is of) in classic and modern grunge. By the way, I did mean Firehouse and not Firehose. Mike Watt wouldn’t be caught dead within a foot of some shitty hair metal band’s hairspray cloud. This record is The Fitt’s swan song to the world: sad but fitting. –Juan Espinosa (Deadfinger, [email protected])