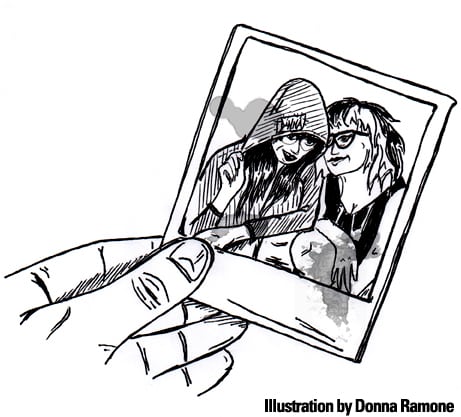 Ever listen to an album, cassette, or a song and have it slam your ass into a time and place you hadn’t visited in a while? Music has the ability to transport us, for better or worse, to these far-flung spaces in our hearts and minds. Sometimes we know what we’re getting into. Playing a record reminds us of a certain time or of a song that we shared with a certain someone. Sometimes, even seeing an album cover or flyer puts us in a state of despair or elation. We’re bombarded with emotions or memories we didn’t expect.

The crackle of a record can send us back years, to the parties of our youth; a song reminds us of a show we saw at a now-extinct venue. Music has the distinct power to drag us kicking and screaming to places we’d rather not visit. It can also float us on a cloud through the memories of our lives. Sometimes these memories are personal and fleeting. Sometimes they spark an inspiration for something more.

Here are three reviews that stirred up some unexpected memories in Razorcake issue 72.

COOL MUTANTS: Self-titled: Cassette
I don’t know about you, but when I’m forced to listen to a band’s cassette, I’m already pretty fed up with the band. First, I’ve got a good three minutes to remember why cassettes are obsolete as I’m struggling to get the plastic packaging off. Then I have ten minutes to diagnose what’s wrong with the cassette player on my stereo and fifteen minutes to try to make the cassette play before remembering that it broke four years ago and I never bothered fixing it because why would I? Then there’s another ten minutes of digging out my other cassette player from one of the boxes in the closet although I’m not sure which one. Then a good thirty-five minutes are completely gone because I’ve stumbled upon a box of old flyers which prompted me to call my ex to see if she remembers seeing The Bouncing Souls with me in senior year of high school. Then I subtly try to feel her out for a bit to gauge whether or not she’s seeing anyone. Then I find out she is and get depressed and make myself pizza bagels. Anyway, what were we talking about? Oh yeah, this band isn’t very good. –Dan Ozzi (Let’s Pretend)

CRACKBOX: Couldn’t Get Worse: LP
In the blackness of my despair during my time in Oakland, I felt unappreciated, worthless, and alienated. I am not fond of how I felt during those days or proud of my inability to bring myself out of that darkness. My friend John didn’t live with us long, but I liked having him around. John had a sensibility and a presence of mind about him that was refreshing amongst all of my bro-punk roommates. He brought me breakfast in bed on my birthday. Steph bought me beer, beef jerky, and gave me a stupid-looking bear she won in the claw machine on the first night we hung out. She cut a lock of her dreads and stuck it in a hole she cut in the bear’s ass to give it a bit of style. Corrina managed to scam food stamps even though she didn’t live in Oakland. She spent most of them on my house for letting her stay for a while. She got a kick out of buying us a set of Pez dispensers featuring all of the princesses and girls of Disney movies displayed in a cardboard case, because it could be purchased on stamps as a food item. John left Oakland after about three months to be closer to his family and friends in New Orleans. There he walked in on his own burglary and got shot in the head. Steph lived with him in New Orleans and came home that night to flashing blue and red lights. She never wanted to be in New Orleans, but wore a bracelet around her ankle that would send her to jail if she left. She did leave, though. She turned on the gas in her home and checked out. Corrina would move to New Orleans and start a band. A band called Crackbox, a band I would rave about after getting their first 7” to review for this fanzine by sheer luck of the draw. I was floored by the vigor, soul, and integrity of the songs. This time, maybe not so much by coincidence, Razorcake sent me their second record, Couldn’t Get Worse, to review. I pulled out the lyric sheet to see Corrina’s photo-realistic drawing of Steph and John together and smiling. Playing the record I heard songs written about friends dying and being sad about it. I heard songs about the struggle to keep living and to keep fighting. Songs about resistance in a broken world. Songs about loss and damage and gritty hope. It was the best damned punk record ever made and if there’s anything else about it you want to know, you can fuck off. –Craven Rock (Self-released, [email protected])

RATIONAL ANIMALS: Gabrielle: 7”
I feel like my opinion of Rational Animals records would be much higher had I not seen them before listening to them. There is an energy in their live set—that I’ve been lucky enough to see a few times—and I never felt it translated to their recorded material. That being said, I’ve never had to objectively review their records so it was easy to pass them off as one of those, “Well, you had to be there” bands that are forever stuck in one place and time, to a very specific group of people who were lucky enough to see them. So I’m listening to this 7” trying to push out any memory I have of seeing them. These two tracks are slower and heavier (the B side especially) than I remember from their other records, with a late ‘80s SST slant on modern punk. The guitars are punchy and evil in a good way and the beats are somehow danceable. Maybe giving them a more attentive listen has yielded better results, or maybe this single is just better than the stuff I heard previously, but the songs, while not really “catchy,” do have a character to them that I feel their earlier material was lacking. However, they fall short of the expectations they create even in these songs, as I just don’t want to listen to it again. I can’t think of a time when these two songs would pop up on a mix tape or DJ set and I would get excited. The song “Gabrielle” is fantastic lyrically and creates a haunting mental image, but I don’t hear the voice of the character in the music. It’s hard to be negative about something when it’s obvious that this record was created with pure artistic intentions and you can really feel that they aren’t holding anything back, but after a few listens, I feel no connection to these songs. Maybe in a little while I’ll be able to share these songs with someone in one of those late nights of flipping through records with a friend, the way these records seem to come up because they just haunt us like “Gabrielle.” “It’s been a long time since I’ve heard this record. The A side is this really sad song, I think it’s maybe about his mom…”, but right now I just don’t feel it. –Ian Wise (Cowabunga)