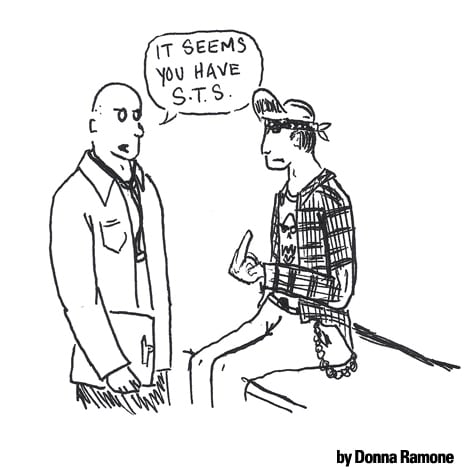 One of the reasons we are so fond of punk that is that, despite the cries of some, it is still very much alive.

Yeah, some punk sucks hard. Yeah, some of it’s on bad TV and crappy movies. Razorcake’s about doing the deep digging.

We still get excited at watching new bands rise and contribute. We continue to marvel at seasoned bands that have chiseled out their place and pioneered sounds for future generations, bands that maintain their integrity and produce great music well into their careers.

We’re opinionated. We’re not “company punks.” There’s no “That band’s classic. You can’t say anything bad about them ever.” We can also get a light hearted laugh when some miss the mark, even when we really wish they hadn’t.. The history that they represent is something that will always be there—good or bad. In fact, it’s still forming.

Bands re-shape, come and go; songs mature and develop, or lose significance. Here are a handful of reviews from issue #71’s cycle to contemplate.

RED DONS: Ausländer: 7”
I’m of the opinion that Red Dons are the best band walking the planet today. I fuggin’ love this band! They have this way of making music that causes everything else around you to melt away and all that is left is the music. You are completely in that moment. It’s a great feeling. The songs soar, race, and have undeniable soul. Catchy without being corny. Insightful without being overwrought. Just fucking great music. The title track is godhead! I’ve listened to it over and over so many times, and have yet to tire of it. Is that even possible? It’s such a great song. A nice, quick tempo and the vocals float over, pulling you into the song, and the chorus burns into your mind. I like how the guitar comes in at the end and builds and closes out with a noisy swirl. The kind of song that makes you want to start a band and take over the world. On the B side is “Mauvaise Foi,” which slows down a little bit with a jerky and bouncy rhythm here and there. When the melody comes in, nothing else matters. I really like the line, “Anointed one, where did I go wrong,” as it leads into the verse. This single is a classic. –M.Avrg (Dirtnap, dirtnaprecs.com)

DICKS, THE: These People: CD
It’s not easy under any circumstance for a band to pick up pretty much where it left off when—for some reason or another—an entirely new lineup needs to be recruited. Add to the mix that the previous lineup was in itself a legendary powerhouse responsible for some of the finest punk rockin’ put to wax and the odds get better for you getting hit by a giant meteor made of salamander poop than it is to match, let alone top, your game. While These People does fall just shy of the benchmark set by previous works, it is by no means a bad album. More than anything else, I would say its shortcomings lie more in the production than songwriting or execution. Here, the thuddy sound that SST house producer Spot utilized to great effect in showcasing the band’s gritty blues undertow on Kill from the Heart is replaced with Klaus Fluoride’s more trebly sonic environment, one that worked well for Dead Kennedys, but here sounds much too sterile. One need look no further than the tracks from the Peace? single attached on this reissue to hear the difference. Outside of that, the album showcases a band that may not have quite exceeded the brilliance of the original lineup, but it handily picks up where their predecessors left off and—if this record serves as any indication—were on their way to some interesting uncharted waters had they not decided to throw in the towel. Bands with the fearlessness, and flat-out greatness, the Dicks displayed are hard to come by, and thanks are due to Alternative Tentacles for making their music again available. –Jimmy Alvarado (Alternative Tentacles)

FANG: Here Come the Cops: CD
Something has to be done. Somebody get a telethon going. We need to eradicate the world of the terminal illness known as S.T.S. (Suicidal Tendencies Syndrome). S.T.S. overtakes once great punk rock and hardcore bands and compels them to write and release wishy-washy cheese metal. As of now, there is no known cure for S.T.S., but with your help that could change in our lifetime. Bands like Fang are counting on you. Operators are now standing by. –Ty Stranglehold (Malt Soda)

LOST SOUNDS: Lost Lost: CD
Lost Lost is a collection of Lost Sounds demos and rough mixes of songs. The fidelity of the tracks is pretty rough at times. But in some instances—such as “Black Coats/White Fear”—the out of tune vocals and coarseness of the four-track recordings enhance the songs. “Black Coats/White Fear” was recorded in 1999, when Jay was only eighteen or nineteen years old. The track has a stunning urgency to it. Jay sings with complete conviction over an acoustic guitar and sparse percussion. Whereas synth pioneers Kraftwerk celebrated European grandeur, Jay and Alicja’s societal vision was, like the movie Metropolis, dark. Their lyrics—often focusing on an upcoming dystopia or the nervousness of contemporary society (check “Throw Away” and “Glued to the Screen”)—was the inverse of Kraftwerk’s celebration of machine as liberating force for mankind. The Lost Sounds had two creative heavyweights in Jay and Alicja. Knowing the pathos of Jay’s life—and the psycho geography of postindustrial America—Lost Sounds was (and remains) the synth-based soundtrack for corporate bailouts and high unemployment rates. There are some odd tracks on here too—like a cover of ‘60s garage song “I Cannot Lie”—and the inclusion of sound effects Jay and Alicja created but had never gotten around to using. Lost Lost is definitely worth having. Jay and Alicja worked well together and their music was always enhanced by synthesizers. Lost Lost is a nice ending to an incredible band. –Ryan Leach (Goner, goner-records.com)

NOFX: Self/Entitled: CD
I came to NOFX’s new full length with minimal expectations but came away pleasantly surprised. This is probably one of the most, if not the most, consistent NOFX releases I have heard. I like NOFX. I think “Linoleum” is one of the best punk songs ever, and have caught them live more than a few times, but when it comes to their albums, even my favorites such as Punk in Drublic and The War on Errorism have songs on them that I have to skip or do my best to ignore (I’m thinking of you “My Heart Is Yearning” and “Anarchy Camp”). Not so with Self/Entitled. The closest to a weak spot is “Xmas Has Been X’ed” but being the last track, it isn’t really much of an issue, and, all said, it is an okay song. “72 Hookers,” which starts the album, features Fat Mike’s perhaps debatable take on Middle East foreign policy in regards to jihadists, but also has a classic-sounding skate punk opening riff, up there with “The Separation of Church and Skate.” A particular highlight is “She Didn’t Lose Her Baby,” which plays like the even darker companion piece to White Trash ‘s... “She’s Gone” taken from the side of an addict mother. Fat Mike really shines on songs like these because he can frame effectively empathetic character studies of people who are not necessarily characters deserving of sympathy, but of some understanding. The same goes for the short “I, Fatty” which appears to be based on Jerry Stahl’s engrossing fictionalized autobiography of Fatty Arbuckle of the same name. One of my problems with Wolves in Wolves’ Clothing and Cokie the Clown were the way the albums’ more personal tracks reveled so heavily in Fat Mike’s self destructive behavior to the point of seeming contemptuous of both those close to him and his fans. Thankfully, there are now songs that seem to reflect a sort of maturation in acknowledging consequences to these actions. “Cell Out” is a narrative song detailing an ill-fated trip to a bar and having an uncomfortable “you can never go back” moment with a hard-line former fan who accuses the narrator of selling out. What is perhaps the centerpiece of the album is “I’ve Got One Jealous Again, Again” (the sequel to the much more optimistic “We’ve Got Two Jealous Agains”) which deconstructs Fat Mike’s divorce through the lens of a lifelong dedicated punk fan and record collector. It peels back the sarcasm and eternal adolescence that many assign as NOFX’s modus operandi, to examine a failed adult relationship in a very concise and affecting manner. It may not be emo, but the bit of honesty really does a lot to help NOFX craft an album capable of standing next to many of their stronger works, which is impressive after a career this long. –Adrian (Fat)