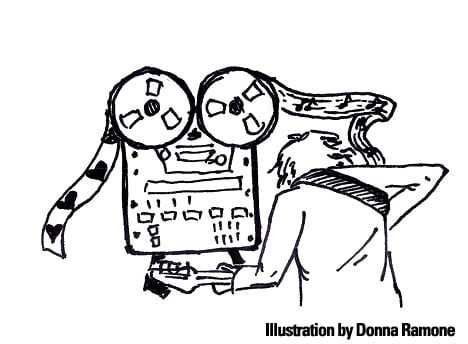 Here at Razorcake, besides being assigned several reviews per issue, all Razorcake reviewers are encouraged to review any new music they’ve recently come across. One thing that definitely isn’t prescribed is how that review will read in the end—positive, negative, or indifferent—there are no obligations. Record reviews can be about opinions.

Reviewers may like an album and want to share it with the world. Some might actually be a warning for us to stay away, as they have graciously wasted their time in sacrifice. Then there are those reviews that give a little more than simply what a writer might feel about a band or a record.

Razorcake review writers are not paid. Review contents are not always promotional. There is some history there, some personal information about a band, or an understanding of a broader timeline of the music that can give readers insight into a bigger picture. Occasionally, a review will walk us through an album in some detail and contribute some fun trivia along the way.

So find out why the cod is being soaked in lye and what night Polish sausage is served while you enjoy these reviews that come as almost mini-stories of albums and bands that you may not be as likely to find in many other places.

In 2010, David and Christine Wolf had to replace the equipment that was stolen when their Chicago house was broken into. They wound up building a home studio, where their band Daylight Robbery recorded their gritty second album, Ecstatic Vision, on a Tascam 38 tape recorder. The album’s lyrics come from people balancing adult responsibilities with playing in a DIY band; rebuilding while sorting out memories and trying not to dwell in the past; asking questions like, “What’s the point?” and “Where do we go from here?” While the lyrics are taking stock, the music pushes forward, vibrant, faster, urgent, with David and Christine both sounding more confident and engaged on the mic. Like their first album, Through the Confusion, Ecstatic Vision has ten songs, but it’s five minutes shorter, wrapping up after twenty-eight minutes with the choppy, jolting “Grassroots,” one of the few new songs that hasn’t jettisoned the band’s new wave influence for spacious, propulsive Australian garage like Radio Birdman or Eddy Current Suppression Ring. It’s not that Daylight Robbery sound like a different band, it’s that they’ve avoided the “same thing, not as exciting” sophomore trap by putting out a record that is rawer and punker, the live-to-tape closeness (and muffled drums) making it easy to mistake for the lost demos of some awesome L.A. by way of Australia band, circa 1979. A retooled dynamic compensates for the downgrade in fidelity. In this claustrophobic recording, the guitar parts have a stronger delineation between riffs and leads, and the band creates the signature space between David’s dark, desert/surf leads and the counting-trees-flying-by-on-the-highway momentum of Christine’s bass and Jeff’s drums by minimizing overdubs. If Confusion was the sound of running down the middle of a dark street, trying to gauge the closeness of your pursuer’s footsteps over the pounding of your heart, Vision is peeking out of a gangway, panting, knife pulled, hoping that the person chasing you runs past. Keep fighting, Daylight Robbery. –Chris Terry (Residue, residue-records.com) 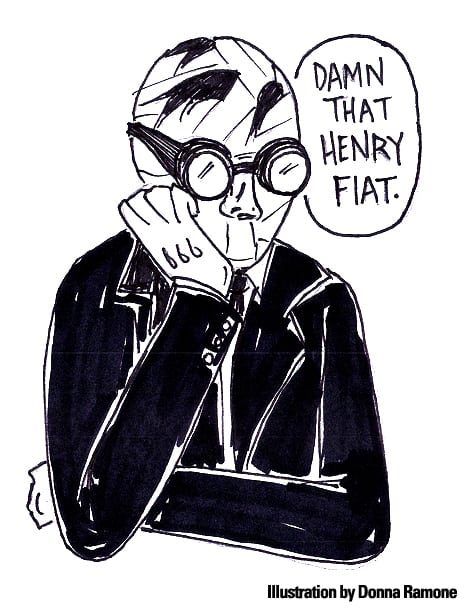 FRIENDS OF DOROTHY: No Sex on Paul Fashion Street: 7”

Luckily for me, few if any people have actually been paying attention to my purple prose since I first started shooting off at the mouth in the pages of this magazine some ten years ago. Otherwise, readers might chafe at the fact that I’m once again going to happily gurgle on about another Henry Fiat-related release. But I will not apologize because my appreciation of the artist formerly known as “Sir Henry Fiat” is utterly without shame. It’s just that every so often you come across an artist—be it a musician, author, painter, pro wrestler, porn star, mime—whose work burrows deep into you like a bad case of heart worm. And I guess the Swede now going by the show-biz name “Paul Fashion” is one of those artists for me. Maybe it’s because it seems to me like he and I are on somewhat similar wavelengths. I like that he seems to go off half-cocked in such a brash and reckless manner—whether it’s in the context of Henry Fiat’s Open Sore, Sir Henry Fiat’s Bastard or now Friends Of Dorothy. This is not to say that everything to drop from his well-lubed pay slot is a golden turd. But for me, the flinchy, manic, Miami-style face-eating oddcore of the 7 inchers that were compiled into HFOS’s Adulterer Oriented Rock CD is still the trashy standard bearer by which I judge almost all other attempts at amped-up, garagey Electro-Convulsive Therapy rock, with or without mummy wraps. That CD was (and still is) the ultimate display of rash-causing rawness combined with Ritalin-starved hyperactive energy and a special hebephrenic queerness that can’t merely be chalked up to the fact that they are exotic people from a strange, far-away country. And while I’m giving vent to any stupid firefly of a thought that alights in my mind, why is it that the two undisputed Pervert Kings of Scandinavian Punk, HFOS and Turbonegro, never played a show together? I don’t know what amount of Aquavit and lutefisk it would’ve taken to make that happen, but I would’ve gladly distilled the potato booze myself and caught and soaked the cod in lye with my own hands to make that dream show happen. But enough about those glorious bands of yore; by now I’m sure that poor Mr. Fashion is as tired of being dogged by his Henry Fiat persona as poor old Fred Gwynn was tired of being forever thought of as Herman Munster. The happy news is that Friends Of Dorothy is yet another quality outing from the Swede: a four song sampling of Fiat-Fashion’s patented brand of hot, thrusting mongo rock that might be favorably compared to early Damned, but with “lewd and lascivious” replacing “cheeky and goth.” And with song titles like “Too Depressed for Success” and “Underachiever,” it’s as if this record was composed just for me. Well, me and Captain Sensible, anyway. This is about as good as non-iTunes music gets and is cause for much dimwitted rejoicing. –Aphid Peewit (Kenrock, myspace.com/kenrockrecords) 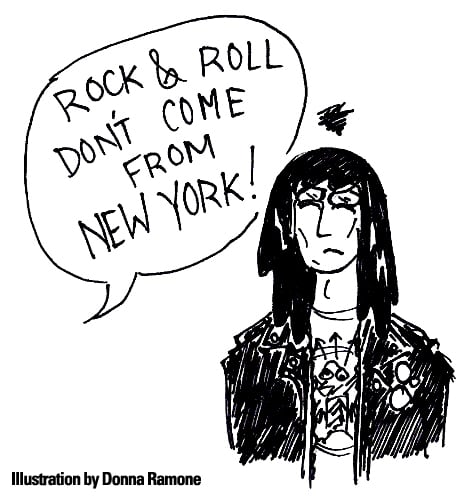 That little post-Stooges, pre-Ramones historical notch in the mid-‘70s has never held tremendous interest for me—i mean, you kinda hear one band tuning in on the Dictators inescapable wavelength, you’ve largely heard them all. Thus, whilst i will cop to digging the Gizmos 1976-77 LP whilst having my first beer after almost a decade on the wagon a number of years ago—as well as owning an “Amerika First” button—i can’t honestly say that “Muff Divin’ (In Willkie South)” “Chicken Queen (The [Ass] End)” or “Gimme Back My Foreskin” have played a particularly huge role in my spiritual development over the years. A corollary to my slightly-above-lukewarm interest in the band ((as anything above and beyond a historical site of interest, you understand)), is that i really did not pay much attention to the band’s latter period in the late ‘70s and early ‘80s—where they try to be less of an applicant for coverage in the Teenage Wasteland Gazette, and more of a, you know, normal, regular ol’ punk band. I mean, hell, in the back cover liner notes, guitarist Dale Lawrence name-checks the Clash, X-Ray Spex, Vibrators, Jam and Boys as influences during this period, which seems like such an un-Gizmo-like assemblage as to merit deportation ((then again, if you live in Indiana, deportation is kind of a blessing)). Either surprisingly or not surprisingly ((as i have confused myself on this matter)), this album—conveniently scraping together the band’s “Never Mind The Sex Pistols, Here’s the Gizmos” ep, as well as their half of the “Hoosier Hysteria” album and a comp track, all ca. 1978-1981—is actually pretty fuckin’ serviceable as a regular ol’ late ‘70s US punk/power-wave album. The band wrote some pretty goddamn good songs—“Cry Real Tears” “Progressive Rock” and “Rock & Roll Don’t Come From New York” ((covered spectacularly in the ‘90s by the Problematics))—the playing was pretty crisp, and the occasional Gizmoism like “Chew it up! Spit it out! Show ‘em what you’re all about! POLISH SAUSAGE, SAUERKRAUT! POLISH SAUSAGE, SAUERKRAUT!” in “Progressive Rock” kept the band’s burgers-and-fries integrity at least partially intact. Kick me to the curb as a clueless cur, but i actually prefer these later efforts to the music upon which they built their empire ((although i used to have to eat Polish sausage for supper every Wednesday and have thereby likely had my fill for life, and never liked sauerkraut whatsoever)). Geshundheit! BEST SONG: “Progressive Rock” or maybe “Rock & Roll Don’t Come From New York” BEST SONG TITLE: “Rock & Roll Don’t Come From New York” FANTASTIC AMAZING TRIVIA FACT: “Just A Little Insane” is, in fact, the Sex Pistols song “Did You No Wrong.” –Rev. Nørb (Vulcher/Hate)