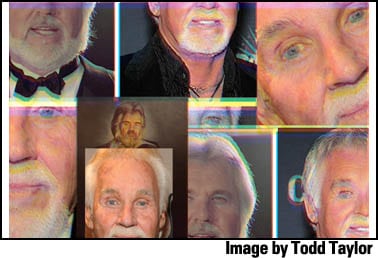 In the world of independent publishing, we have to embrace our advantages. Razorcake doesn’t give our reviewers word counts. There is no minimum. No maximum. Here’s a secret: reviews aren’t always about the bands or authors. Why should they get all the attention, all the mic time? Sometimes, what’s being reviewing sparks a long series of events and unearths philosophical underpinnings.

Sometimes, a reviewer is in strict moral opposition to a band. Record reviews are a good place to establish boundaries, where the culture gets challenged and defined. It’s in the review section where shape slowly takes form.

And then there are the reviews of genuine praise and are prime examples that being truly independent and underground are banners we should all proudly seek, pay attention to, and fly.

DAVEY PORTER AND THE YOUNG REPUBLICANS: Mistakes Were Made: CD
Kenny Rogers’ face is a good example of something that’s gotten dramatically funnier and simultaneously more frightening as the years peal away. The Republican Party is another one. As if espousing a political philosophy only a little bit more sophisticated than that of a territorial toddler isn’t bad enough, some of the Grand Old Party’s most star-spangled mouthpieces outright physically resemble giant tantrum-prone toddlers: notably Rush Limbaugh, Karl Rove, Glenn Beck, Newt Gingrich. Then, in a bold move to become even more cartoon-like, the Republican Party maladroitly became the platform for the dim-bulb Homecoming Queen contingent, ala Sarah Palin and Michelle Bachmann. And by the time Joe the Plumber strode into the limelight, assumed a plumber’s squat, and let loose with his runny nuggets of “everyman” wisdom, the clown dung had basically hit the fan. But don’t get me wrong: Democrats are ridiculous too. On several levels, I tend to think that all political animals should be taken as seriously as balloon animals. But it’s not all laffs and pratfalls. There’s a scary side too; namely that the Neocons are such paragons of neurological rigidity and ideological inflexibility, what Robert Anton Wilson (I think) termed the “statutory ape.” They have an insect loyalty to their own overactive greed glands and to them shameless self-indulgence is considered a virtue. They start with their First Fundamental “Truth,” which is “nothing whatsoever should obstruct my ability to acquire the things I desire, particularly if I’m already well-to-do,” and then they move out from there, philosophically speaking, and formulate their worldview based on that one foundational “given.” These are people just screaming to be made fun of. They are setting a new standard for zealotry that used to be owned by cultists like the Branch Davidians and Facebookies. But disregarding them entirely could prove lethal, quite literally, to the entire planet, so it’s good to know that wise people like George Lakoff are providing New Enlightenment-based approaches to dealing with sanctimonious, hidebound Neocons on the socio-political level. But work also needs to be done on the satirical level. And that’s where Davey Porter And The Young Republicans step in. Davey Porter, in fact, even has that corn-fed, fat cat cherubim look made so popular by Limbaugh, Rove, et al. Or maybe his name is “Dudley”—I’m not real clear on that. Regardless of who’s who, Davey Porter And The Young Republicans is a trio who dress up like snooty Republicans (ala the Yuppie Pricks), and play metalized punk songs that extol the virtues of the Conservative-Life-Lived-Right and their lyrics ooze with such blubbery smugness that I can’t help but think of Newt Gingrich’s love handles. And according to the band bio, Porter even “out-Nuges” Ted Nugent in the category of grunt-snorting he-man conservative primitiveness by virtue of the fact the he was raised in the backwoods of North Carolina by a family of deer, who he later ate at the age of fourteen, after growing his first beard. Terrible Ted’s loin-clothed G. Gordon Liddy routine can’t touch that with a twelve-foot stink pole. Musically, you could make reasonable comparisons between the Young Republicans and bands like Fear, 1990s-era Meatmen, the Plasmatics, and even Iron Maiden. The only unfortunate thing is that this Davey/Dudley character, I’ll bet, probably works at the Guitar Center; his Dimebag Darryl guitar tone just sounds like it’s being filtered through an array of sound processing products he got at work with his thirty percent employee’s discount. But that’s a fairly minor quibble. It’s really the lyrics that are the focus here. If you are a fan of mock-conservatism along the lines of The Colbert Report or the Yuppie Pricks, you’ll at very least probably find this CD amusing in spots. Sure, it’s an easy target, but it’s also a fun target. Go get your copy of Mistakes Were Made and have a few laughs before this country’s second Civil War breaks out between the Cutthroat Neocons and Everyone Else. This stuff might not seem quite as funny once that happens. –Aphid Peewit (Self-released)

PORN STARS OF HORROR , THE/ POTBELLY / SKEXIES, THE:
This Thatand Some Other Shit: 3-way split: CD
The cover of this CD’s glossy one-panel digipack looks like art that was lifted from some Teenage Mutant Ninja Turtles fan fiction that my roommate would blog about. It’s some Quincy punk male vulture and male warthog with female werewolf and female fish creature hanging on them. This looked like complete shit. In conjunction with the bands’ names, I was expecting complete shit. I don’t give a fuck if I come off like the PC Police on this, but the artwork, some of the song titles, and the band names, to a certain extent, reeked of reinforcing gender roles and stereotypes—and the lyrics on some songs reinforced this: these three bands that seem to revel in being shit, with a desire to be offensive. All three sections of the disc begin with malicious statements about the proceeding band, with a declaration about the whole disc being shitty at the outset. PSOH: Horror punk with hardcore punk songs, both male and female vocals. One of the male vocalists has a hankering to sound like Glenn Danzig. I hafta admit that their sexual juvenilia in the song “Touch” made me laugh, with its words of butthole touching in something of a romantic context. Perhaps the worst “love” song ever. Skexies: Male- and female-fronted Violent Society type ‘90s crap of a lower tier with metal bits. I thought it was harmless until the song “Sweet Tits.” The song’s chorus has the remarkable refrain of, “Slut, Slut, Dirty Slut, Dirty Whore Go Fuck Yourself,” sung by both vocalists. The song also has a line about shoving “black cocks” in one’s ass being a “blast.” Maybe I’m being sensitive here, but I’m calling racism based on the fact that the line is meant to offend whomever the song is about. They could just be the thoughtless words of a jilted meathead, but that shit is fucking too much for me. Potbelly: Pretty sure this is a live set. All male band. Shitty, unmemorable drunk punk hardcore bullshit. “Jaimee the Cock-Blocking Lesbian” is one of their songs. “Monkey-Fuckers from Mars” is another one. Don’t forget “Alcoholicide.” Come to your own conclusions on that one. –Vincent (PB / P.I.G.)

The Nostalgia Echo
By Mickey Hess, 331 pgs.
I’ll begin with my only real knock on The Nostalgia Echo: it’s hard to summarize what this book is about in a sentence or less. I’ve read the book twice now and I still can’t do it. It’s becoming a bit of a problem because people frequently ask me if I’ve read anything great lately. I’ll say, “Yes! The Nostalgia Echo. You have to check it out.” Then they’ll ask me what it’s about and I’ll start stammering. I’ll do my best to answer that question for this review, though.
The Nostalgia Echo is about nostalgia, in short. Hess has probed into the history of nostalgia, tracing it back to its earliest days when conscripted Swiss soldiers couldn’t fight because they missed their homeland too much. He remembers a time when nostalgia was viewed as a disease, and he examines cures that eighteenth- and nineteenth-century doctors proposed for the disease. And he invents a fictional 2006 (appropriately just far enough in the past for us to remember it with a winsome air) where nostalgia rules.
The novel follows three characters who are on a course to become entangled in each others lives. First is Dr. Barnes, a nostalgia theorist at Princeton. In 1976, he wrote a book called The Good Old Days Never Happened. It was one of the worst-selling books of all time. Only five people attended his book event at the Philadelphia public library. Well, three people and two fetuses. Those fetuses developed into the other two main characters of the book: Lon Friday and the narrator, Gene.
Lon is a graffiti artist who has made a stencil of the picture of Dr. Barnes’ face and painted it all over Philadelphia. It has become a sensation similar to Shepard Fairey’s Andre the Giant. Unfortunately, it’s not enough to keep him from following his father’s footsteps and becoming a realtor.
Gene is not only the narrator of the book, he’s a professional narrator in the book. His job is to narrate the talking head “documentaries” that flood television. His narration on a piece about the worst-selling books of all time triggers his search for Dr. Barnes. The three characters steer an unconscious course for each other, and end up together in Princeton, New Jersey, where Lon struggles to regain his creativity and save his marriage, Gene searches for his adoptive mother and for love with Dr. Barnes’s live-in caretaker, and Dr. Barnes struggles against dementia.
Along the way, Hess takes us into a reality adjacent to our own, where narrators go to narrator school to learn their trade and where Nostalgia Studies is a department at Princeton. It’s a world where the present is too banal or painful to face, but as soon as it becomes the past, it’s wonderful again. It’s a world close enough to our own to recognize, but distant enough from our own to see the absurdity of our contemporary life. Through it all, Hess displays a playfulness and a wry sense of humor reminiscent of Vonnegut. He also pastes together familiar (and not so familiar) elements of contemporary society—addiction memoirs, monster movies, class reunions, where-are-they-now-type TV shows, and Colonel Sanders’ autobiography—into a literary collage the way a hip hop DJ pastes samples together to make a new beat.
In the end, the book is imaginative and original. Most impressively, it’s more than just a meditation on nostalgia and more than a fresh approach to how to write a novel, it’s also a heartfelt character study. The reader comes to feel for and even love the major characters in the book. It’s hard not to get swept up in their lives. It’s even harder to put the book down. In short, The Nostalgia Echo is one of the best new books I’ve read in the last few years. I can’t recommend it highly enough. –Sean Carswell (C&R Press, 812 Westwood Ave. Ste. D, Chattanooga, TN37405)