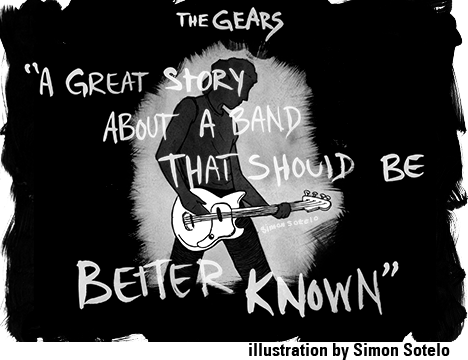 Featured DVD Reviews From Issue #86: the Gears inhabit that wonderful, early era of Americana punk rock that was more

Don’t Be Afraid to Pogo: Movie
L.A. punk pioneers The Gears get the documentary treatment in an ode to rock and roll in 1970s East L.A.

The Gears are a central but often-overlooked piece of the mid-to-late 1970s L.A. punk scene. A quick résumé of their past would mention playing with bands like X and the Weirdos at legendary clubs like the Whisky a Go Go and the Starwood. From the very earliest moments of their 1980 debut album, Rockin’ at Ground Zero, it is clear that the Gears inhabit that wonderful, early era of Americana punk rock that was more American Graffiti than Clockwork Orange, more Buddy Holly than Johnny Rotten. One story told in the film recalls Rolling Stones’ Mick Jagger and Keith Richard scoping out clubs in disguise, wanting to discover and record a new band in New York City. They showed interest in the Gears before suddenly deciding to go with a then-little-known band called the Stray Cats. If only, right? Throughout the film, paths are crossed with the likes of the Blasters, Los Lobos, and Carlos Guitarlos, to give you an idea of where this band is coming from. It is music history. It is punk history. It is East L.A. history.

Director Chris Ashford has told a great story about a band that should be better known. In a long line outside the Vista Theater on Sunset, one person remarked that there were more people in line for the film than showing up to their concerts. That’s right: the Gears are still rolling and the film gives credit to every single member, past and present. No one is left unaccounted. Every thumping beat, screeching guitar lick, and sneering vocal makes its way onto the film, along with a soundtrack put together by X drummer DJ Bonebrake. If you have any interest in punk history or this great city,Los Angeles, this is a must-see film. –John Mule (Wondercap, wondercaprecords.com)

Last Pogo Jumps Again: Punk’s Last Waltz, The: DVD
The Last Pogo Jumps Again documents the growth of Toronto as a city as well as a Petri dish for punk. The talking heads pinpoint the arrival of The Ramones in ‘76 as being the major tipping point. The disaffected youth discarded their Aerosmith records and formed their own punk bands. Springing forth were Teenage Head, The Curse, The Cads, Viletones, The B-Girls, The Diodes, and many more. As someone unfamiliar with the early Toronto punk scene, I’m enamored by all of the killer tunes and DIY history. Colin Brunton and Kire Paputts brilliantly depict the evolution (or de-evolution) of a city. The changing architecture mirrored the social revolution as well as the demise of punk landmarks: The New Yorker, where The Ramones first performed, transformed into the Panasonic Theatre; The Colonial Underground is now a mini-park; and the Crash’n’Burn, Toronto’s first punk club, is currently business offices. As an L.A. native, I understand firsthand that the environment may change, but the punks always find a way to play. Last Pogo is a masterfully crafted beast (running time is over three hours) with an additional disc chock-full of special features. No time is wasted, and the interviewees are exhaustively mined for insightful anecdotes. Without a doubt, Last Pogo is one of the most comprehensive and inspiring documentaries on punk I’ve ever seen. Highly recommended. –Sean Arenas (3003 Danforth Ave., PO Box 93634 Toronto, Ontario M4C 5R4 Canada, thelastpogo.net)