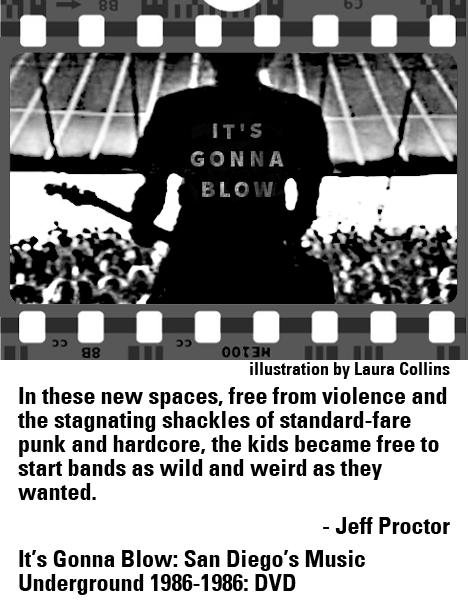 It’s Gonna Blow, directed by San Diego documentarian Bill Perrine, is a an exceptionally entertaining and insightful look back on the San Diego music scene of the late ‘80s and early ‘90s, when San Diego was coming into its own and touted as being “the next Seattle” by much of the music press. The film’s title is taken from the Trumans Water song “Aroma of Gina Arnold,” which is in reference to a former San Diego Union-Tribunemusic journalist who was seen as a cheerleader of the newly mainstream-cool, corporate-commoditized version of alternative youth culture and its corresponding bands. (Lyrics: “Your plastic culture sucks; It’s gonna blow!”)

The documentary was of particular interest to me as a former San Diegan who has had some form of involvement in the San Diego music scene for a little over fifteen years. As a person just a touch too young to witness firsthand the bands and surrounding cast of characters documented in this film during their heyday, seeing the footage of bands like Trumans Water, Fishwife, Pitchfork, Inch, Tanner, Sub Society, Drive Like Jehu, Amenity, Heroin, and many others that had broken up (or withered into obscurity) by the time I was of an age to enjoy them, is something that I found incredibly valuable. The movie is lovingly put together and each of the interviewees exudes a warmth and reverence for the scene and the era.

The documentary is presented less as an authoritative history and more as a group of friends casually reminiscing over a bygone era. This helps give the movie a familiar feeling; we’re invited to sit and chat with Ryn Foxe (Fishwife) while he works the door at (now defunct) Bar 11, with Matt Reese (Funeral March) and Mitch Wilson (No Knife) from Matt’s backyard tiki bar.

The film is told mostly in a linear, chronological fashion, beginning with the violent, “punchy” hardcore scene of the early ’80s. This section includes an anecdote where skinheads attack the Vandals in the middle of their set, ending the show and (for a time) the San Diego hardcore scene. Simply trying to get away from the violence of the San Diego’s ‘80s scene is largely what drove the slightly younger generation of punks to create their own scenes, in new venues like the Ché Café and the Casbah. In these new spaces, free from violence and the stagnating shackles of standard-fare punk and hardcore, the kids became free to start bands as wild and weird as they wanted.

There is tons of footage and discussion of how radical the bands were and how loved they were, but it was never explicitly mentioned that these bands gave birth to all manner of hardcore, indie, and noise subgenres. And while the nature of the interviews helps keep the movie flowing and friendly, more exposition might help people understand how and why the San Diego scene was so unique, rather than just highlighting the fact that it was.

For example, there’s a brief conversation with Milo Aukerman (Descendents) about UCSD’s long-running, on-campus punk collective the Ché Café, without mentioning that UCSD was the college that Milo went to (as in, Milo Goes to College) and that he played in local bands while a UCSD student. In another instance there is footage of Drip Tank playing at a 7-11 in the back of a rented moving truck. It wasn’t mentioned that Drip Tank had planned a “tour”—where they played dozens of 7-11 parking lots across San Diego on July 11, 1990 (7-11 day)—dubbed the “7-11 Freedom in Your Face Tour.” A brilliantly ridiculous undertaking, it loses out on the full weight of its lunacy.

All told, these are minor quibbles. There is so much to enjoy in this movie—like George Anthony (Battalion Of Saints) in a graveyard giving an animated, though mostly rambling story about breaking Henry Rollins’ nose, or the home footage of Fishwife recording Ritalin (naked, in a Hollywood studio) with John Reis at the helm continually commenting that the band is in the same hallowed ground as “the Def Leppards.”

The DVD also includes a whole mess of really cool extras, including a flyer gallery of old shows and live footage. The DVD artwork was done by Rick Froberg (Pitchfork, Drive Like Jehu). It’s Gonna Blow shines a long-awaited light on a group of bands and labels that were exceptionally innovative and influential, and also exceptionally fun. If this scene is new to you, I think you will see that our bands were among the best, weirdest, and smartest that you could find in punk and hardcore. –Jeff Proctor (Billingsgate Media, 4580 Hamilton St., San Diego, CA92116, billingsgate.org)