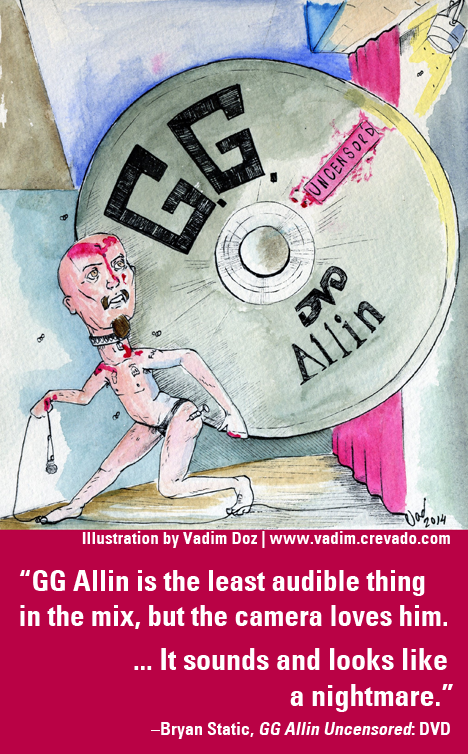 As far as I’m concerned, there are two GG Allins. One was a musician, a curator of low fidelity garage punk. His music, more or less, has become stale twenty years down the line. Having no connection to the time that Allin was actually around, with stories spreading about him like a ghost around a campfire, the music doesn’t sound all that violent or revolutionary. More than anything, it sounds like washed-out noise, hardcore that’s nothing more than hardcore.

The other GG Allin was the spectacle, the pooping, vomiting, violent, and bloody mess of a man who defied you to enjoy what you saw. Though I have no problem with people enjoying the first GG Allin, this Allin is unpleasant to view and comprehend. Worse yet, he makes no statement other than shock, or at least none that I can discern. Granted, his brand of shock rock makes all others seem tame and kitten-like.

This DVD is less of a tribute to the first GG Allin and more of a document of the performance of the second. The music quality in the recording is so blown out, that GG Allin is the least audible thing in the mix, but the camera loves him. The audience can’t get enough of the spectacle. American flags torn asunder, microphones being shoved into assholes, Allin beating his forehead with the fervor of a madman, all there in their ‘90s VHS tape glory. Truly, I couldn’t imagine even thinking about attending a GG Allin show back when he toured actively. It sounds and looks like a nightmare.

I don’t agree with Allin’s quintessential premise that rock music needs to be violent and in-your-face vulgar. That’s the road of a zero sum game, where diminishing returns would mean that eventually rock music would be forced into the obscure as it tried to find more ways to shock people. Shock is a limited art that’s best used when forcing society to confront awkward truths about itself, but with the end goal of just disgusting the audience, there is no winner. Except for Allin himself, who I assume is still laughing his ass off, if the afterlife he believed in exists. Grade: C. –Bryan Static (MVD Visual, 203 Windsor Rd, Pottstown, PA 19464, mvdb2b.com)