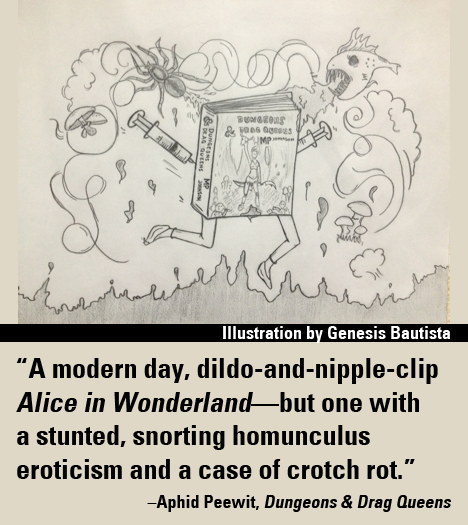 Dungeons & Drag Queens
By MP Johnson, 133 pgs.
With the very idea of “reality” currently being hijacked by a pestiferous strain of low-brow entertainment called “Reality TV”—replete with Bible-toting, duck murdering hillbillies and wealthy, dim-bulb, selfie-snapping Armenian narcissists —it’s little wonder that we media-scat-spackled humans might run to works of fantasy for sanctuary, now more than ever. And who can blame us? This soul-sucking type of hollowed out “reality,” whether in the form of Manufactured-Reality TV shows or the plucked and propped-up “reality” presented in Facebook pages, seems to have attached itself to the faces of every man, woman, and child in the western hemisphere like itchy bee beards. If this shit is reality, then maybe even unusual forms of escapism like those enjoyed by paraphilic diaper-wearing enthusiasts of the adult baby syndrome stripe aren’t all that unreasonable after all.

Any fantasy port in a so-called “reality” shit storm, I guess.

MP Johnson’s latest surrealist-baroque fantasy, entitled Dungeons & Drag Queens, is a warty, little psychedelic dwarf of a book, and one tripping on horse tranquilizers at that. Apparently this novella is classified among the eldritch tomes that make up the “Bizarro” genre, with its emphasis on oddness at every turn and its ever-shifting sands of absurdist phantasmagoria. Within its pages is a mushroom- and tumor-dotted mythology, crudely similar to something one might come across in Joseph Campbell’s Hero with a Thousand Faces, just with more oozing orifices.

The hero/heroine of this medieval tale is Sleazella LuRuse, a drag queen originally from Green Bay who comes across as a combination of Lady Gaga, Wendy O. Williams, J. Edgar Hoover, and any number of rough’n’tumble roller derby dames. She is mysteriously snatched from the stage at the Bar Belle where she danced and lip-synched and suddenly awakes to find herself shackled in a cave in the realm of Houmack, where she is told she is expected to wed the Lord of the Sky and bear his children. Equipped with the wrong reproductive organs for the job and a generally bad attitude, Sleazella is determined to somehow jilt the Houmack King and make her way back to Green Bay and her life at the Bar Belle. Swashbuckling bizarro adventure then ensues.

Roaming in and out of Sleazella’s storyline is a wild menagerie of exotic and teratological creatures, both supernal and earthbound. Many—such as the slavwolves with their multiple nipple-mouths and the Nthvorians who fire roast and then devour their own penises—have a Dr. Seussian flavor, harkening back to the unlikely beasts that populate On Beyond Zebra.

Even what we usually consider to be “laws of nature,” like gravity for instance, are suspended or even reversed in D & D. Not only does it, in classic Fortean fashion, rain blood, but the blood “rains” upward towards the sky—leaving the landscape below littered with husks of the bloodless unfortunates caught in the “storm.”

It could be argued that the winding swords-and-sorcery storyline takes a deliberate backseat to a garish parade of All Things Odd, both creatures and events. In fact, with its over-the-top delivery, it’s very possible that this little book is a piss-take on the Dungeons and Dragons game and related wizardly entertainments. And though I suspect that’s the case, I can’t speak from any position of authority since my adolescent nerdiness never included Dungeon and Dragons parties and my adult nerdiness, as of yet, does not even include a single viewing the very popular Game of Thrones. So there could well be, scattered throughout this book, examples of bitingly clever parody that are simply failing to register with me.

What I am sure of is that Dungeons & Drag Queens is dribbling, burping, and smeared with more types of glop and slime than a Nickelodeon Kid’s Choice Award show. Gunk, spew, oozing pustules, pink jelly, white pap, spider shit, and even lard from the gorpalfish—these are all but a mere grocery store food-demonstrator lady sampling of the viscous bodily fluids and excreta offered up on nearly every page of D & D.

I think it could be said that Dungeons & Drag Queens is a modern day, dildo-and-nipple-clip Alice in Wonderland—but one with a stunted, snorting homunculus eroticism and a case of crotch rot. It’s a geeky cross between Comic Con and RuPaul, and it is oozing with more bodily excretions than you could mop up from Charles Bukowski’s bathroom floor. Perhaps not meant for the squeamish or brain-numbed Reality TV junkies, it is a psychedelically charged headcheese sandwich that fans of Bizzaro Lit will most likely relish.

I only wish that the cross-dressing director and schlock fantasy auteur, Ed Wood, was still alive; no one else I can think of would be so eminently and queerly qualified to translate this epic tale of transvestitism to the big screen. –Aphid Peewit (Eraserhead Press, eraserheadpress.com)

This book covers the first few years of the founding of the anarcho punk movement in the U.K. For The Day The Country Died: A History of Anarcho Punk 1980-1984, Glasper conducted hundreds of interviews with band members associated with those heady days, when British anarcho punks believed that they were engaged in a vital struggle against the country’s swerve to the political right, led by Prime Minister Margaret Thatcher at the top and a growing gang of quasi-fascists in the streets. Those early years seem so distant, especially when today’s American anarcho punks often seem primarily concerned with the best ways to score pizza out of a dumpster. I don’t mean that as a cheap shot. I’m not an anarchist, but I am sympathetic to their beliefs, even if I often have little patience with the hippie-wannabes who pass themselves off as crust punks. But this book does a good job of exploring how, in the early days of U.K. anarcho punk, elements from two subculture strands—hippie anarchists and political DIY punks—came together to form something of a movement.

The Day The Country Died is over 450 pages, but don’t be scared away by that. It is full of black-and-white photos, and broken up into bite-sized chunks that focus on individual bands. In fact, the organization of the book is really smart, but not without problems. What Glasper does is divide up the book into sections that focus on specific geographical scenes (such as North and Northeast London, South and Southeast London, South and Southwest England, Wales, and so on) covering all of the U.K. He then subdivides each of those geographical sections to focus on individual bands. For example, chapter nine on Scotland is divided into four parts, focusing on Oi Polloi, Political Asylum, Alternative, and AOA respectively. And each band’s section contains a “Selected Discography,” which is a valuable resource. This structure works well because it gives each band a singular focus. Each section is richly detailed with lengthy quotes from interviews that provide the historical evolution of that particular band, but also reflect on what the principal actors thought and felt about a range of issues. You also get a sense of how distinct the various geographic scenes were: what local issues they were facing as well as the personal dynamics and challenges within each scene.

What is somewhat lost is the ways the scenes interacted with each other. The interviews clearly show a great deal of communication and connectivity between bands and scenes, but Glasper rarely steps back often enough or far enough to provide a bigger picture. That was frustrating at times. Also frustrating was the fact that a book organized around bands inevitably overlooks the non-band elements of any scene. What about the zines, labels, artists making posters and folks booking shows? Again, it is clear from the interviews that the non-musical support structure for the anarcho punk scenes was extremely important, but as a reader we are left to fill in a lot of blanks.

These drawbacks are unfortunate, but don’t diminish what Glasper has pulled off here. This book is a monumental accomplishment. He covers around eighty bands—some of which you will already be familiar with, like Crass, Conflict, and Subhumans, but many you probably aren’t—such as Icon D, The Xpozez and Untermensch, to name a few. And while the more influential bands get slightly more space, even the lesser known bands are given a great deal of attention and respect. The interviews that underpin the book are widespread and insightful. Sure, they tend towards glorification of the scene, but they are not without a strong dose of critical reflection. Of course, I would like to have seen more attention to how anarcho punks worked out the little details of life (e.g., how did a band collective insure equity of workload?), but there is so much in here that is hard to be disappointed.

There is a DVD out with the same title that covers similar ground (I can’t recall Glasper’s relationship to that documentary, but I’m pretty sure he is interviewed in it). The film is good—especially because you get to hear the music—but the book is much, much better. It covers far more ground and goes far deeper. Even if you have only a passing interest in these bands or in anarcho punk in general, this is a great treasure. –Kevin Dunn (Cherry Red Books, 3a Long Island House, Warple Way, LondonW3 ORG)

It is probably tiresome for the locals to hear this, yet probably bears immediate mention, that this is London Ontarioof which we speak, not the place with the bridge and the dungeon ((although one supposes those freaky Canadians have a little of both of those as well))—a town of around 350,000, lost somewhere between Detroit and Toronto, and renowned for its drab normalcy. This book was intended to serve as a companion piece to an art exhibit of London punk ephemera—flyers, zines, record covers—and, as such, I find it tooled slightly towards the inclinations of the person who picks it up in the gift shop on the way out of the exhibition rather than completely aimed to pique the interests of the random bookstore snooper ((case in point: Nowhere on the front cover is it clarified that the London in question is in Canada—when I initially flipped through it, my first thought was “Hey, where’s all the Jamie Reid shit?”)). Further, as the book was produced through a collegiate art gallery, there’s an understandable tendency here to place the punk happenings du jour ((see? I can speak Canadian!)) in the context of the art scenes of the day ((stemming from/in opposition to/etc.)), which is a sort of academic turn one doesn’t usually see in scene-documenting materials, where potential connections between the punk scenes and art scenes usually merit about half a sentence of discussion. Essays aside, the brunt of this book is basically pictures of fourteen years’ worth of flyers and some other stuff—which is awesome not so much because London’s flyers were anything special to look at, graphically ((they weren’t)) ((sorry art dudes)), but because it brings to bear the idea that EVERY scene could produce a book like this. Which is, dare I say, “what it’s all about.” Nice work you doughnut-eating bastards! –Rev. Nørb (McIntosh Gallery, 1151 Richmond St., London ON, N6A 3K7, Canada, mcintoshgallery.ca)