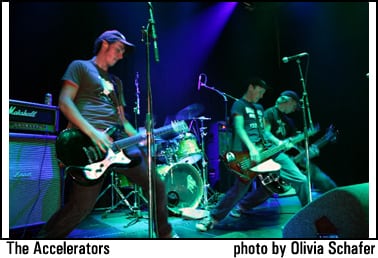 You ever get the feeling that since so much has already gone wrong, that it couldn’t possibly get any worse? Yeah, well that’s what we thought a week before this year’s Faye & Livy Show. I won’t get into details as to what exactly had already gone wrong in the preparation of this year’s fest, that would only bore you (yeah, let’s use that as an excuse for me not wanting to reveal too much behind the wonder that is the Faye & Livy Show). So, things were looking up. We had taken care of everything there was for us to, and then… eight days exactly before the show, we had gotten word from our second band, the Dangerfields, that they had to pull out of the show. With a long line of bad luck for these Irish boys, the icing on top the cake was that their bass player up and left them stranded mid-tour. So, due to lack of bassist, lack of money, and lack of van, the band had to unfortunately cancel their appearance at our show and the little mini-tour that was planned around that weekend.

So, what next? Go on with only three bands—Jeremy’s, the Accelerators and Bobby Kingsize—or find a replacement on such short notice? We’re not ones to give up easily so we looked under every rock and around every corner until, through the help of our new best friend Jay from Sedate Bookings, we hooked the Saturday Night Beavers from Belgium. Phew! Seven days to go and we’re back on track with four bands. All we had to do then was take care of last minute promotion and let everyone we could know that there had been a change in lineup.

Okay, so the night of the Faye & Livy Show was upon us… people were slowly but steadily filling up the venue and, once again, it was time for my partner in crime Faye Valentine and myself to stand up on that stage and welcome everyone. You see, not only do we organize, book, and promote the fuck out of our fun parties, we are also always your humble hosts. That’s what has been so special about the Faye & Livy Show for the past six years. No other punk rock party has yet copied us in that sense. So, yes, we’re onstage doing our thing and introducing the first band to kick off the night… 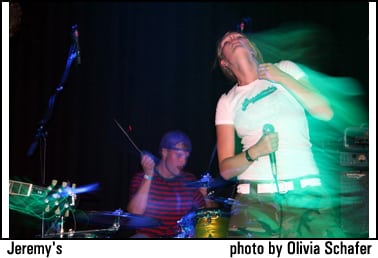 Jeremy’s is a girl-fronted power pop, skate punk band from Zwolle in Holland. I found them on myspace and was hooked immediately. So, after no convincing on my behalf at all, Faye felt the same, and we booked them without ever having seen them live before. That’s a rarity, since we always like to check out bands live before booking them. During sound check the night of the fest we got a little preview—and lemme tell ya—we were blown away. Not only does this band play nice and tight, but the vocals on that girl, damn! And once they started playing in front of the audience, it just got better and better. They protrude so much joy and energy in their set it makes everyone who likes good music want to dance. And shame on those people who, during their set, decided to stay in the back by the bar because, apparently, there’s some unwritten rule that opening bands are not worthy to stand in front for. Not worthy, my ass! This band was more than worthy, and it’s a shame some people found it necessary to not participate in the dancing and not give them the attention they deserved. After not having played live for a while, this band played so well they must be unbelievable when they play on a more regular basis. From what people were saying afterwards, they all found this band a-rockin’ so that’s a-great(http://www.jeremys.nl/) 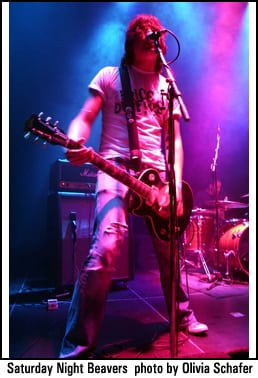 Next up, we had our personal heroes for stepping up last minute to play our show—and the best rock’n’roll band to come out of Belgium (right next to the Kids)—the Saturday Night Beavers! The last time we had seen them was at the Stardumb Winter Rumble in 2005, and a lot has happened in that one year. For one, this band has grown into one of the best live rock’n’roll acts that I have ever seen. With a new fourth member, they are now a lot more tenacious and faster onstage, which just adds to the whole new experience of seeing this band live. Everyone who attended this year’s Faye & Livy Show was blown away. I kid you not; even Faye’s mom is regretting not buying one of their CDs that night. She was hooked. I’m sure the Dangerfields would’ve provided us with just as much high-voltage rock’n’roll, but we couldn’t have asked for a better replacement! We definitely want these guys back! (http://www.saturdaynightbeavers.com/) 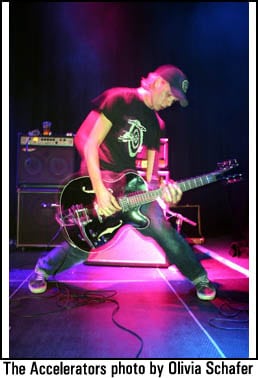 Rotterdam’s finest, The Accelerators, were third in line, and to quote our Littlest Eva, held thrice the charm. Their adolescent punkrockedness is what makes them snotty. Their raw and unscrupulous edge they throw into their musicianship is what makes them stand out from most of the other up and coming young punk rock bands with similar influences and idols. I think we waited long enough to ask them to play our show because they were just what we needed to make this year’s lineup so damn good. They played old and new songs alike which got the audience pumped and sweaty. They did an excellent job of rocking out—despite what they may have thought—it’s what the crowd thinks that matters and counts! (http://www.the-accelerators.tk/) 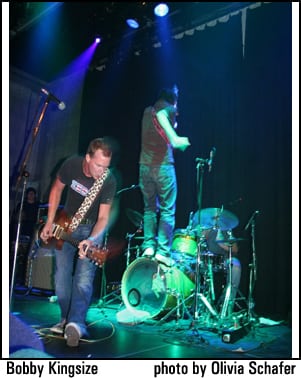 Headlining the Faye & Livy Show 6 were none other than Bobby Kingsize from Utrecht. By the way, none of the guys are called Bobby. This band fuelled with high-quality rock’n’roll is by far one of the best bands to come out of the Netherlands today and always. They leave you wanting more, whether it be listening to their album at home or seeing them literally rock your socks off live. These guys breathe rock’n’roll and they make you believe in it too. This was one hell of a way to end the night with a bang. It was the best I’d ever seen them live, and I wear their shirt with pride! (http://www.bobbykingsize.nl/)

All these bands are worth checking out live and in cyberspace, so go to the official Faye & Livy Show website for links. The 6th edition of our not-so-little party was a success, the bands all rocked hard, everyone present had a blast, and that is what it’s all about, baby.

On Behalf of the Faye & Livy Show