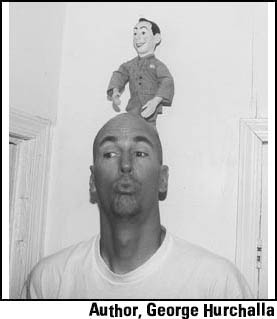 Extras from the George Hurchalla Interview: #32 Was Busting at the Seams. We Couldn't Fit It All. By Jimmy

Jimmy Alvarado, interviewed George Hurchalla, author of the book, Going Underground, which takes an in-depth look into the history of the punk scene, while simultaneously displaying why so many people fell in love with punk in the first place. Jimmy clearly states his favoritism of Hurchalla’s book over the “sloppy mess of slanted perspectives” in Steven Blush’s book, American Hardcore. Here are some quick excerpts from Jimmy’s interview, where he and Hurchalla discuss the connection between punk and politics as well as the power of calling yourself punk. If you like what you read, pick up issue #32 for a full, exhaustive interview by Jimmy.

Jimmy: Given punk’s penchant for flirting with extremes, though, wouldn’t the fact that some segments in punk have embraced neo-conservatism make sense? Compared to even Nixon, the current ruling class of so-called conservatives easily falls within the confines of “extremist,” bordering on fascist.

George: It makes sense in that way, yeah. There’s always been an element that has wanted to pursue things simply because they’re extreme or because they shock society, like all the wearing of swastikas by punks in the ‘70s. Or Nazi skinheads, for that matter. But that’s a whole different thing than this neo-conservatism that’s being touted by Dave Smalley and the like. This neo-conservatism is a reaction against the indulgence of liberalism and its support for big government, and arguing the not unreasonable line—that a lot of punks share—that people should be more self-reliant and take more control of their lives. Again, that was kinda the same view Kezdy from the Effigies took and he said a lot of reasonable things. But neo-conservatism is going the wrong way on the political spectrum to actually get those things. They end up with bedfellows who profess the same ideas but actually believe in big government spending on war, government intruding into your life morally, and government spying on you. It’s the same bullshit as Reagan’s “rugged individualism”: appeal to this frontier mentality of the American character while using government to get corporations rich, all this insane corporate welfare while denouncing welfare for the people who need it most. I learned long ago some important things about the political spectrum. It’s a circle, not a line. We’re always taught it’s a line with fascism at one end and communism at the other. But in fact, libertarianism is at the right end and anarchy at the left, and everything kinda comes full circle with them being fairly close to each other—theoretically, mind you. Fascism is hard to even pinpoint on the spectrum, since you have to remember it was dreamed up by the Italians as a twisted perversion of socialism in which the people are supposed to serve the state rather than the state serve the people, with the government exerting totalitarian control over society. Bush and company are working toward the fascist ideal of state control to dictate morals and control people’s thinking and have people serve them, but doing so while helping big business make as much money as possible. So it’s a little different. The Nazis and Mussolini needed business on their side to consolidate power but they wanted state control of big business eventually, so no one could threaten their power. Bush and his cronies are big business, so they’re not worried about that. So neo-conservatism in practice is just another perversion, like fascism, of a theoretical idea that our rulers use to mask their true aims. And any punk that buys into that is stupid, because in practice all it does is support religious fundamentalism, state control, the rich getting richer, your freedom taken away—everything that punk is supposed to be against.

Jimmy: Do you still consider yourself a punk? Or do you think the term and its accompanying values are antiquated?

George: Oddly, ten years ago I wouldn’t have called myself a punk, though I consider myself one now and know I’ve always been one. It’s up to me to define, and since I’ve learned to reject other people’s definitions, and reclaim the term for myself, I’m comfortable calling myself that. There’s nothing antiquated about the values. It’s more important to live a life of open rebellion now than it ever was. People didn’t lie over for Reagan quite as badly as they have for Bush, and punks need to scream in rage against this decaying society more than ever. Words are just words until you make them your own. I could let people call me an anarchist, or a rebel, or a crypto-socialist, or a bum, or a skinhead, but I choose my own terms and I’m just fine with punk.