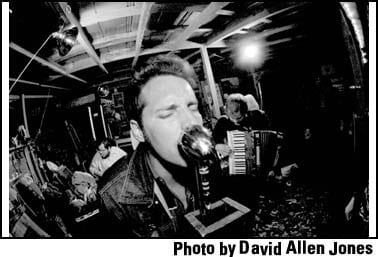 Razorcaker, BD Williams interviewed a ghost-inspired bunch of musicians known as the Pine Hill Haints, who play a unique Southern-influenced rock from the heart of rural Alabama. Here, Jamie, guitarist, vocalist, tenor banjo, fiddle, and harmonica player, spills the beans on some ghost stories that are rumored to have happened around where he lives. For the full article, pick up issue #32.

BD: What about the ghost train?

Jamie: Right down from the Pine Hill Cemetery is a rail line, and if you read the history of that line, it used to go down where Wire Road is now and right into Auburn. You can still see the old train bed out towards Waverly, too. But all these old hobos, Civil War, and WWI vets talked about how that in the middle of night sometimes this phantom train would come blasting through Lee County. There’s supposed to be all-documented times with hobos and other people talking about the phantom that would come racing up and down there.

Well, immediately behind the Pine Hill Cemetery (Poe’s dad) told me this other story about the train, but the way he told it, he said the devil drives that train. And there was this one fella who, when it came his time to die, the devil picked him up and gave him a ride on the train, and the guy didn’t want to die. And, somehow, the guy tricked the devil, and the devil gave him this silver watch. The guy knew that if he hit the silver watch then time would freeze, and the devil agreed with him, but said, “If you die and you don’t hit that silver watch then your soul is mine.” So the guy didn’t have to die and so he gets off the phantom train, and that guy lives a long life. And gets back in the church, but eventually he falls back into gambling and drinking and drugs. He loves to hear the shuffle of cards, and the dice; the spin of the roulette wheel. He likes to play with fait and chase, but he’s always got his hand on that silver watch. One day, he gets sick and is starting to die. And right as he’s about to die, that devil’s train comes up the line. The guy’s holding that watch in his hand, and he looks up inside the train and sees all these beautiful guys and girls, the casino wheels, the dice, the liquor, and whiskey, and the devil pulls him up in there, but as soon as he gets in there, he hits that watch. That was the end of the story that Wes? (Poe’s dad) told me. That’s a weird ending ‘cause you don’t know if he ended his life in hell or if he rode that train partying forever. It’s a weird story but that was exactly the way Wes? (Poe’s dad) told it.

BD: Isn’t there some pretty wild stories from around where you live?

Jamie: Right down from my momma and daddy’s house there’s this old trail. The Choctaws claimed that trail was there before they ever arrived. Today, it’s called the Natchez Trace. On that Trace, people see these white horses—many people have said they’ve seen a white horse. Sometimes, two horses walking side by side—that’s like some sign of death. Well, there was these thieves who murdered and blundered their way down the trace. Right south of Alabama on the trace is a place where the grass doesn’t grow. People say that’s where the witches dance. Nothing will grow there. And these thieves ran up and down the trace, heedless of the witches, heedless of the hard-boiled Baptist preachers and everybody else, robbing, thieving, and cutting throats. And they’d run down to New Orleans from Natchez, Mississippi and spend their money. One of those boys got caught in the little town on the Mississippi/Alabama state line, and they cut his head off, stuck it on a post outside of town, and left it there to rot until it became this white skull. The other guy had seen the skull, but he kept on killing and robbing. But he got caught and while he was in jail he saw the white horse walking up the trace and looking at him. And right after he saw the horse, this old lady came out of the woods and took the skull from the post. People said that she ground that skull into powder.