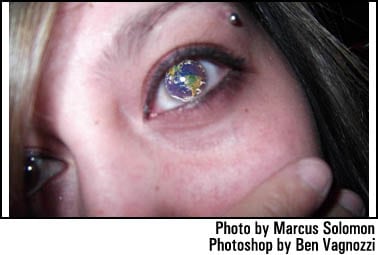 Everything is Why: Punklightenment July 2010

I remember a kid having an epiphany at the local skatepark and, recently, his words came back to strengthen me. It was about twelve years ago when my buddies and I were skating the almost-decent Spruce Skatepark in Rancho Cucamonga, and we had placed a Buddha statue on top of the flat-topped pyramid. My good friend Fabian was doing fat, enormous, frontside ollies over it and I was taking pictures. There was no conscious concept involved. I just wanted to do a fairly random art composition with skateboard photography and the Buddha statue was an arbitrary prop. Fabian is an astounding skateboarder, so, naturally, his high-flying ability attracted a lot of attention. The kids gathered around to watch Fabe dominate the curved concrete and a few noticed the statue of The Buddha. It was fairly small, only a foot or so high, with The Buddha in the traditional, sitting meditation posture. “What is that? Who is that? Why did you put it there?” I remember a few of them asking. Those questions led to an impromptu discussion of the meaning of life, religion, and philosophy in general…and I saw a young boy, probably about eleven or twelve, have his first taste of Enlightenment. I will always remember when he lifted his eyes to the sky and said, “Everything is why.”

After I ran out of film and Fabian ran out of steam, we retired to the cool space under the nearby trees. Skater kids always follow the sponsored guy, so a few of them joined us on the shaded grass. They asked the usual questions to Fabe about what skateboard companies sponsored him, how they could get sponsored too, how long he had been skating, and all that sort of thing. A couple of them inquired about the statue I had sitting by my side. I told them it was a Buddha, that the Buddha was not a god, but was a teacher whose philosophy became known as Buddhism. Because they were so young, and because I did not want to preach or come across as a know-it-all, I kept the explanation short and generalized. I explained that life is basically what we make it, and the things we do have results. The Buddhists and Hindus call it Kamma (Karma), and the Christians and Jews call it “Reap what you sew”; every religious tradition has this action-reaction element to it.

“All I want to know is why I am here,” one young boy said to no one in particular. I asked him what he meant. He said he wanted to know why he was born. That he wanted to know why anybody was born and why anything existed at all. I was impressed that such a young person was pondering such weighty, philosophical questions; ones that have perplexed great minds for centuries. It was a long time ago, but I remember telling him that if life had an answer, then life would be a problem. In one of my Religious Studies classes at U.C. Berkeley, Professor Huston Smith once said that in a lecture. Basically, he was explaining that problems have solutions; math problems have answers. Life is not a problem; it is an experience. Looking for an answer in that fashion is the wrong approach. One student stood up, and with just a hint of defiance, asked the question: “Then, why are we here?” “Because it’s fun!” said Professor Smith.

At the time, I got the teacher’s basic point—that life should be enjoyed—but the wise professor’s answer seemed too simplistic and incomplete. After all, life is not always fun. Every living being suffers and a lot of that suffering is undeniably unjustified. I believe in karma too; it’s just an obvious action-reaction observation backed by solid science. But at the same time, there are so many people who suffer and have done nothing to deserve it. Just turn on the news or read the paper and see how people all over the world are dodging bullets in some stupid war; how many people are starving; rape, murder, child abuse…the list is staggering. What did all those people do to deserve that karmic punishment, and how does it factor into the “life is fun” explanation? There had to be more to it than just that.

When this kid asked the question, “Why am I here?” again, I said, “You are here to wonder why you are here. You are here to skate, to fall down, and to try again. You are here to make it and to try something new. You are here to laugh, to cry, to eat, to be hungry, and…” He was looking intently at me while I spoke. I thought maybe he thought I was just some blabber-mouthed weirdo. But then he rose his face to the sky, and with a far-away stare, he quietly said, “Everything is why.” Then he said it again, but louder. His friends looked at him strangely and he said, “Don’t you see? Everything that happens is why we are here!” He was elated and I got a kick out of watching his mind explode and expand. He encapsulated it all…all of human existence into just three words. I realized then, and just recently remembered what this kid taught me. That everything that happens is the reason in itself. It’s that old “Life is not a destination, it is a journey” sort of thing. I already had come to that conclusion, but to hear that young boy state it so simply and clearly, it opened up a whole new level of understanding.

But still, something was still unanswered. If karma is real, if we reap what we sew, how does that account for all the undeserved suffering in the world? As usual, I took such a question to one of my Buddhist monk advisors. He gave me a look that can be verbally translated as, “You’re dumb.” Then he said, “You know all living things suffer. That is the price of existence.” “But what about all the undeserved suffering in the world?” I asked. “There are many who do not deserve the tortures they are forced to endure.” The Bhante Piyananda explained that everything is interrelated. Sure, our thoughts and actions create an effect in our own lives, but they also create an effect on other people’s lives as well. Simply put, the things we do cause things to happen to other people. The sage went on to describe how power, greed, and personal ego can lead to war, which in turn leads to the suffering of millions of people. How when someone loses mindfulness for a moment while driving, it can lead to a horrible car wreck where many others may be injured or killed. It was not a person’s bad karma that led to the painful events, because karma is impersonal—it makes no value judgments—it was someone else’s unwholesome thoughts and actions that created the conditions that cause others to suffer. On the contrary, the good things we do have the same effect. Even the smallest act of kindness can have the same domino effect. Just doing something good for someone else can set in motion a wave of kindness that may save millions.

Years later, after many personal trials and tribulations, after many years of rejoicing and sobbing, after teaching this and learning that…after losing my beautiful fiancé and wondering why I am still here…I looked up at the sky and I remembered what that kid said…“Everything is why.”

I wonder whatever became of that boy.