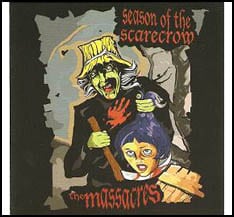 No good hero is worth his salt if he doesn’t have a few sick, depraved villains, right? Although I prefer to look at myself as more of an anti-hero, I’ve certainly racked up a decent share of enemies in my lifetime. While there are some recent entries into my hall of villains, I feel that it was my classic adversaries that have really helped define me as a person.

Rupert
This guy was a complete toady who lived across the street from me. He never really had it in him to be anything but second fiddle to one of my more charismatic villains. The high point in his lecherous career was climbing onto a tree fort in the woods and pissing on my little brother. He is now a cop.

Nate
During our first few years, Nate and I ran Comet Avenue. We’d cruise the street on our Big Wheels or hang out in his living room playing video games. Somewhere around second or third grade, Nate became corrupted. He stole my toys and called me names. After he destroyed a life-size robot my grandpa and I had spent a whole day building out of wooden blocks, I was drawn into my first physical fight. I took him down on my front lawn and pounded on him as hard as I could, rolling underneath the giant pine trees as we struck each other. My dad ran out of nowhere and broke it up. The cold war of Comet Avenue had begun. He has disappeared into some adult web of evil.

Lieberg
Lieberg and I were subject to similar taunts from our classmates. What should have drawn us together only pushed us apart. We hurled insults at each other to propel ourselves as far away from the bottom of the grade school pecking order as possible. Our initial clashes were wars of words as well, but not of the spoken variety. We both wanted to be writers. At that age, our idea of determining who was better was who wrote more. We built page after page of sagas of time travel and mutants and argued about whose was better. These battles fell to the wayside as we grew older. Instead, we clashed physically, either on the playground or after school. As a fellow writer, I considered him my most formidable foe. Last I heard, he had been tossed into the clink for stealing a car.

That was just a sample of the nemesis I gathered throughout the years. Here are some more recent additions:

The Defectors: Give in and Creep Out with… (No Fun Records)
At first, when this werewolf came charging at me, stomping his feet and shaking like an epileptic, I thought it was a joke. When it got closer, I saw that every shake and stomp, although uncoordinated from a distance, had a reason behind it. As it chomped at me with its crooked fangs, I ran. I looked over my shoulder to see it open its mouth to howl, but instead of howling, it yelled, “All right now!”

The Massacres: Season of the Scarecrow (Flying Saucer Records)
Do you ever try to talk while you’re yawning? That’s what this band sounds like. The vocals are so bored, I get the feeling the singer recorded them while shopping for pants. While I love bands integrating horror imagery into their music, I prefer it if they sound like they give a shit about it. Give me a sense of maliciousness, or at least camp. I’ve heard pop songs with more aggression than these guys. Great job grabbing the most overused sample from Night of the Living Dead ever. That really shows you care. 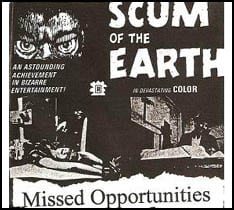 Scum of the Earth: Missed Opportunities
This is scary. Hidden under a gritty, photocopied cover made out of graphics from old horror flicks, is a burned disc filled with monster movie hip hop. Sure, the flow is about as agile as the Creature from the Black Lagoon when he’s out of water. True, the rhymes are not nearly as tight as the seams holding Frankenhooker’s limbs on. More importantly though is the brutal honesty and obvious love for b-movies on display here. The tale of an awkward early sexual experience is embarrassing to listen to, but in a good way. That’s not to say that these guys are welcome on my block, but I have no problem giving my enemies respect when it’s due.

Enough about my enemies. There’s a book called Chimeraworld #4. It’s out now. It’s about cars; how much they suck, how cool they are, how some people have sex with them. It includes my most recent story, “Tingles.” Feel free to check out http://www.freaktension.com/ for more info about it and other scary stuff.